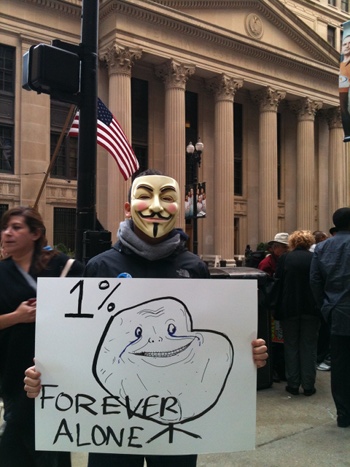 A layover at Chicago’s Union Station has me walking the streets, and I stop for an hour in front of the Federal Reserve Bank, where fifty or so men and women are now in their eighth day of protests. A young man in a Guy Fawkes mask is happy to explain the details. Occupy Chicago, in solidarity with Occupy Wall Street, is a leaderless (but committee-heavy) movement aimed to “fight corporate abuse of American democracy.” “How long will you stay here?” I ask him, and he takes off his mask to look at me. Brown eyes, heavy brows. “Until Congress meets our demands,” he says. “They’re still on the streets in Egypt, and we’ll stay on the streets here.”

At the time I happen in, discussion among the core group—twenty or so people sitting cross-legged in a circle—has to do with image. What kind are they presenting? “We should wear khakis,” someone suggests. “Khakis and polo shirts. A suit if you have one. It’s one thing to see hippies in the street—,” a few mutters, “—but it’s better if some businessman can walk by and think, hey, that guy looks like me.” Modest applause.

“But that’s the whole point,” someone says, “that we’re not suits. We’re the people. This is what the people look like.” This being sweatshirts, jeans, beanies, hand-rolled cigarettes. More cheering. And a third suggestion: that there’s no need for one uniform, it’s better to have a variety of looks. This gets the most cheering of all.

The cheering, I should mention, is silent–there’s a whole system of hand signals that I’m just beginning to catch on to. Wiggling fingers means approval. A triangle formed between the thumbs and index fingers means a point of order. This quietness, I gather, is part of a thoughtful system of self-policing, the goal being to strike a balance between attracting attention and irritating passers-by. Protestors draw each other out of the way of pedestrians, and reprimand each other for littering. One man, realizing that his smoke is blowing towards me, apologizes at length and pulls me in front of him, towards the center of the group. “You should be able to listen without getting gassed,” he says, disgusted, despite my objection. “God, I am so sorry.”

The quiet lasts until a city bus passes and the driver honks, two long beeps—sure, there’s a lot of wiggling fingers, but even more whooping. When the ruckus fades, a man pumps his fist. “She’s in a union!” he says.

More discussion: The protest now has 5,000 Twitter followers, and its website, occupychi.org, got a record number of hits. $1,100 raised in donations, plus more food than they can eat before it spoils. What they really need are ponchos and socks. Someone’s going to lead a meditation class. Someone else is teaching yoga. Another bus drives by, and everyone cheers even louder than the first time. Nobody cares that it didn’t honk.

There are committees: a treasury committee, a press committee, an art committee, a bicycle committee. “If anyone asks you why you don’t have a job,” someone says into a megaphone that doesn’t work, “hand them your resume and ask them for one. And if you have a job, tell them! But if you don’t, join a committee and really put your time in. Your new job is to make a change in this country.”

How do the police feel about this? “They brought us coffee and food at the beginning,” says Guy Fawkes. “But now that they know we’re serious–well, let’s just say I haven’t seen any donuts lately.”