The people who’ve come from around the country to occupy Freedom Plaza in Washington, D.C. helped fulfill their promise to “Stop the Machine” by entering, and ultimately closing down for the day, the Smithsonian’s Air and Space Museum. They chose the museum for its glorification of weaponry in general, its special exhibit on unmanned flying drones in particular, and the tribute it pays to the arms industry by naming its IMAX theater after Lockheed Martin.

Today’s action was proposed at Friday night’s General Assembly meeting on the plaza, most vocally by David Swanson—creator of, as well as much else, WarIsACrime.org. Some initially objected that its meaning might be lost on onlookers, but the idea prevailed.

The march itself—or “stroll,” as it was called, to avoid militaristic jargon—started around 2 p.m. today and reached the museum about half an hour later. Swanson was leading the march, together with members of Code Pink and a contingent of young Wisconsinites. (Also in the lead was confessed agent provocateur Patrick Howley, one of the “hundreds of earnest and principled reporters” whose careers The American Spectator claims to have launched.) Several protesters made it inside and, from the second floor, dropped a pink banner that said, “NO DRONES / END AFGHAN WAR.” But when as many as 500 “strolling” people surged up into the museum carrying signs and chanting, guards used pepper spray to repel them as they got just inside the doorway.

Within seconds, those entering the building turned back, coughing and holding their eyes and writhing in pain. People outside, themselves breathing in the peppery air and coughing, poured water on their faces. Soon, there was a short standoff with police officers, followed by a rally on the steps of the museum and a performance by the Bread and Puppet Theater. Somebody provoked the man playing music across the street to go on a loud rant in his microphone against the protesters, but then he played songs for them. There was an assembly-style discussion. Several model drones—realistic-looking and otherwise—accompanied the group. 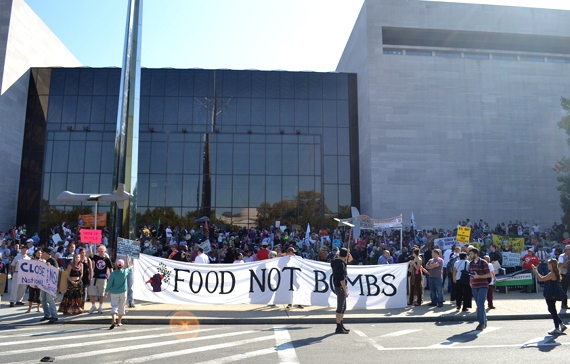 When word had come that some of those who had been apprehended would be released on the other side of the building, a group of marchers went there to greet them. They staged a sit-in, blocking the back entrance and singing songs like “This Little Light of Mine” and “If I Had a Hammer.” All the doors of the museum were already locked anyway, and it was closed for the rest of the day. Tourists continued to approach it and many went away angry.

One woman was arrested in the incident, the first arrest of the ongoing occupations in D.C.: 19-year-old Thi Le of Madison, Wisconsin. She was released within a few hours and received by fellow protesters who waited for her outside the precinct.

The outcome of the confrontation remains to be seen—especially in whatever crowds might come to Freedom Plaza on Sunday. An incident with pepper spray was of course a turning point for winning public sympathy for Occupy Wall Street, and it may be again in D.C. But in the case of Wall Street there was no apparent justification. At Air and Space, however, despite the use of probably excessive force by the guards, many outside observers might also see it as a necessary measure of crowd control to protect a national museum. The protesters say they had no intention to damage anything—later on they chanted to police officers and guards, “We are peaceful!”—but this might have been made clearer from the outset.

According to messages on Twitter, members of the separate occupation that began on October 1 at McPherson Square on K Street have made a point of distancing themselves from the action.

Despite some complaints that the reason for targeting the Air and Space Museum weren’t obvious enough, the action surely made a lot of people think about the museum and what it represents in a new way. The signs and props protesters carried conveyed their opposition to ongoing wars abroad and to the celebration of weapons that goes on inside. There were a large number of people visibly identified as veterans taking part, as well as military family members. The idea of going to a museum to admire technologies designed for killing was certainly called into question by this action. Unlike the sites of Occupy Wall Street confrontations, which have occurred on roadways, the target here made sense.

Less successful at first glance, however, was the tactic that ultimately met with pepper spray. The protesters could have sent a powerful message without appearing so threatening to guards, much less to visitors inside. The banner-drop was an example of this. So was the sit-in. But when a large, loud crowd leaves the street and moves toward a building, those leading it should be aware of the effect that they’re having on those in their path, and of the ways they might be antagonizing the very people they’re intending to win.