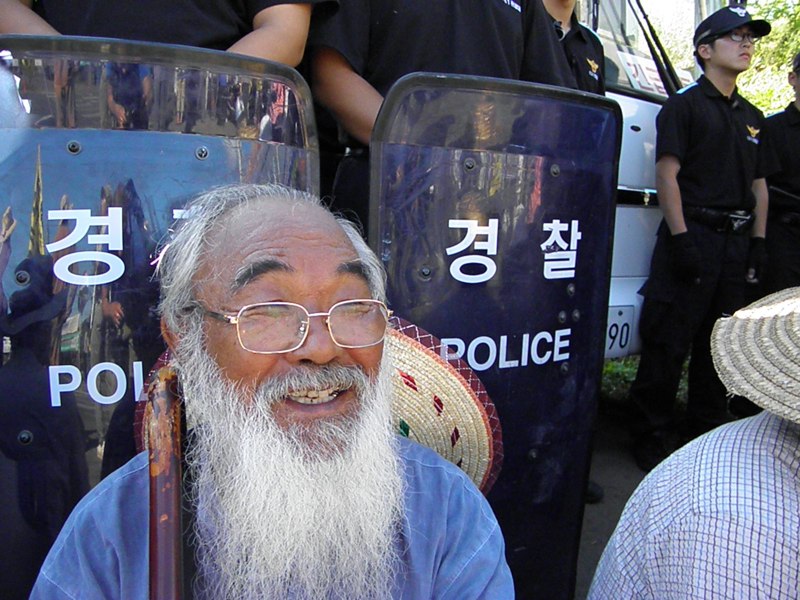 Jeju Island is very far away from all the ferment and fervor of OccupyWallStreet, OccupyChicago and OccupyBaltimore. It is even further away from OccupyNewLondon (which is going to start on Sunday, 4-6pm every day, down by our infamous whale tale).

Jeju is in South Korea and it is apparently very beautiful. Unofficially, it is known as Honeymoon Island, because Korean newlyweds go there after the wedding (obviously). The area is studded with coral reefs and UNESCO designations.

Officially, Jeju was dubbed the “Island of World Peace” by Roh Moo Hyun (South Korea’s president until 2009) because it was the site of a 1948 democratic uprising that was met by slaughter—it is estimated that between 30,000 and 60,000 civilians were massacred by the military.

Against this backdrop of beauty and suffering, there emerges a new kind of struggle. In the tiny fishing village of Gangjeong, the South Korean Government is building a deep water naval base. In the process, they are dredging the sea and destroying coral reefs and upending life for the residents.

The beautiful island has the misfortune of a strategic location—300 miles from the United States’ rival China, between Japan and the South Korean mainland and along major international shipping lanes. Joon Gang Daily, a South Korean newspaper, described the base under construction as “the spearhead of the country’s defense line.”  The South Korean government maintains that the base is for its own Navy, but activists see the hidden hand of the United States—and its very large destroyer ships. “The Navy Base is too big for the South Korean military,” South Korean activist and War Resisters International Council member Jungmin Choi told me recently. “Our government is so secretive and they have not said, but the base would be big enough to host the Aegis destroyer and we don’t have those.”

Noam Chomsky, the linguist and life-long student of U.S. imperialism, notes in a recent In These Times article that:

the Jeju base would host up to 20 American and South Korean warships, including submarines, aircraft carriers and destroyers, several of which would be fitted with the Aegis ballistic-missile defense system.

All of this saber-rattling and base building would put Honeymoon Island in the crosshairs of the next global conflict—or the next battle in the already seething global conflict. Take your pick, but either way the people of Jeju are saying “no thanks” to all of that!

In the five years since the plans were announced, the South Korean government has seen opposition coalesce—94 percent of residents oppose the base—and residents use all of the tools in the democratic tool box to stop the base. And that includes their bodies. Sung-Hee Choi, a Jeju activist, has just related the latest news to members of the Global Network Against Weapons and Nuclear Power in Space. The South Korean Navy began blasting work along the coastline a few days ago over the objections of the Island governor Woo Keun-Min and despite the fact that the Island Council is demanding that the central government and Navy stop construction. She says:

The navy, as usual, has never consulted the villagers for the work today. Do you believe? The navy totally ignoring not only the opinion of villagers but also the demand of the Island Council and even the Island government, conducted six times of test blast of the Gureombee [coastline area] today. Eleven activists were arrested during their resistance in the sea and land.

And this is just the latest. Over and over again, Catholic priests, Buddhist nuns, villagers, students from the mainland and people from every walk of life have been arrested in civil disobedience by the South Korean police. Just a few days ago, nine Catholic priests hopped the fence and were arrested. The struggle is getting more and more international attention.

Celebrated feminist and Ms. Founder Gloria Steinem was on Jeju over the summer and wrote about her experiences in a New York Times op-ed. “I can still hear the dolphins crying as if sensing danger,” she writes, expressing her uncertainty about what will happen next as the military continues construction over the bodies and resistance of the people. “But somehow, my faith is in the villagers who say, “Touch not one stone, not one flower.”

The Global Network will celebrate their 20th year of anti-militarism work with a February 2012 conference to bring international attention to Jeju. They will start in Hawaii at the Pentagon’s Barking Sands Pacific Missile Defense where Aegis missiles defense systems are currently located and then go on to Jeju where they will ultimately end up (unless the campaign is successful). Global Network coordinator Bruce Gagnon writes that “Our friends in Hawaii and Jeju Island are very isolated and we want to join them in a show of solidarity as they work to end the militarization of their island homes.”

We can’t all go to Jeju (or maybe we can), but in the meantime American Friends Service Committee is hosting a “Peace in Asia and the Pacific” conference later in October and Yanae Pak, a Jeju activist, will be there to talk about their militant nonviolent resistance to the base.

Even if you can’t attend the conference, add your voice to chorus of opposition by signing this petition to “Save Jeju Island.”

Money and Occupy Sandy — a response from the Rockaways

A climate meeting of the minds