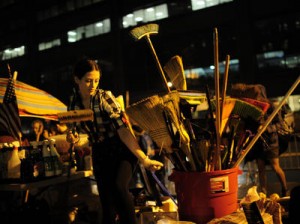 As protesters busily cleaned up Zuccotti Park last night in their successful effort to prevent an eviction due to “sanitation” reasons, this is as good a time as any to remember that popular perception is paramount—even over issues as seemingly mundane and inconsequential as hygiene and apperance. During the 1989 Tiananmen protests in Beijing, one of the primary demands of the students was that the government rescind their classification of the protests as one of “turmoil,” and thus legitimize it among the general populace. Here’s a passage from Zhang Liang, Andrew Nathan and Perry Link’s The Tiananmen Papers, recounting the scene at the square on May 17, a month into the protests (and two weeks before the crackdown), about how the protesters sought to achieve this:

Around 7:15 A.M., the student public-address system called for more dialogue between students and the government and broadcast a demand that the Standing Committee of the Politburo formally remove the label “turmoil” from the student movement. The broadcast also reminded demonstrators that maintaining rational behavior and public order was crucial to gaining the sympathy of observers around the country. In this regard, the broadcast continued, some improvements were in order: The students needed to stay well organized, should not show themselves pursuing amusements like playing cards, and should sleep in the Square as neatly as sleeping in their dormitories. They needed to keep order with their own task forces on monitoring, information, and logistics. Their aim, the broadcast said, was to get the label “turmoil” removed through the power of the people…

In the end, perhaps the focus will return to the actual issues and it won’t matter that conservative outlets are currently fixating on the superficial, using it as a pretense to dismiss the protests. But if issues like the orderliness and “rowdiness” of the protesters continue to dominate the narrative, should Occupy Wall Street protesters try to more strenuously impose limits or standards of behavior on themselves as the Beijing protesters tried to?

Then again, during this morning’s march around Wall Street, a marcher was forcibly grabbed by police, thrown to the ground and arrested simply for sweeping trash in the street with a broom.