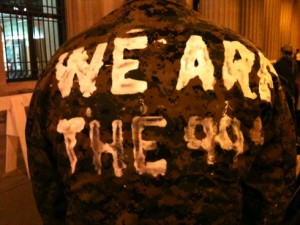 When I visited the Federal Reserve building earlier this week, Occupy Chicago had grown. At the time, three hundred people had joined in its biggest march, and eighty or so protestors crowded the sidewalk, talking excitedly. There was music—drumming on one side of the street and singing on the other. A massive box of free burritos. A first aid station. So many signs that they were stacked on top of each other:

Where will you be for the revolution?

If corporations are people, then what do they eat for breakfast?

There was a gray-haired man in a ponytail, bent over an acoustic guitar marked with the words “This Machine Kills Neo-Conservatives.” He strummed, plucked, not much of a tune, and barely looked up when I joined him. I said I’d like to ask him some questions, that I’m a writer. “How’s that working out for you?” he said to his guitar. “I’m a house painter. But nobody much wants their houses painted anymore.”

“You, too?” A well-dressed man in dark jeans turned to us. “I do water and air conditioning,” he said.

“Pretty shitty,” said the man. “Nobody’s installing these days. They can’t afford it. Now I’m losing my house. Got a four-year-old daughter.” He paused. “That’s why I’m here.”

“That’s why we’re all here,” someone else said. There are no private conversations on the street.

I talked to a man named Mark Banks (“That’s my real name,” he said. “It sounds like a joke, but it’s not.”) Although the movement claims no leaders, he seemed to be, more than the others, in a leadership position. Every minute or so people came up to him with reports, updates on how committees were doing, or just to check in. “What’s our goal?” he said, then answered his own question. “Our goal is for American policy to not be written in corporate boardrooms. For the democratic process to meet the requirements of its own definition.”

Someone added, “We want the 99% of the people who aren’t the corporate elite to have 99% of the say, instead of the other way around.”

When he was done talking to me, Mark shook my hand. “Hang around if you’d like,” he said. “Feel free to grab a taco, or some bongos. Make yourself at home.” A few minutes later, above the music, I heard his voice again: “Is that pot? Get rid of it, or go away! You cannot smoke pot here.”

Honk if You’re in Debt

Vehicles honked constantly. Taxi drivers honked the most. After that, bus drivers. “Who else honks?” I asked the man next to me, and he looked up in surprise. “Garbage trucks never stop honking.” Then he added, “It’s because they’re in a union. Rumor is, we’re getting the unions behind us.”

“Occupy Wall Street’s even got a few hundred pilots now,” a woman in dreadlocks pointed out. (The United/Continental pilots who marched on Wall Street in uniform on September 27 were unaffiliated with the occupation.) “And the cops know that. They know we’ve got Democrats, Republicans, black people, white people, gay, straight, whatever. We represent the 99%, and they’re part of that. They get it.”

On Monday night, a police crackdown and the threat of arrests led protestors to begin what they’re calling Phase II: Mobilization. The congregation expanded from the Federal Reserve to include a series of mini-protests throughout the city and neighboring communities, teams of mobile protestors moving from day to day. The Occupy Chicago blog praises the fact that decentralization reinforces the movement’s emphasis on universal leadership.

On the flip side, there’s the risk of growing apart, of each mini-protest developing its own mini-personality. A large group may not have leadership, but it does have peer pressure, stamping out individual decisions—drug use, for example—that could more easily emerge and flourish in a smaller mobile protest. Already tensions have risen between Federal Reserve protestors on the appropriate way to respond to hecklers, with the majority position being to maintain peace at all costs. Without the pressure of a crowd, a small group or individual could more easily respond with anger.

Occupy Chicago has a strong web presence, which, along with its nightly General Assemblies in Millennium Park, could go far to maintain a feeling of central community. It just issued a call for donations of two-way radios and smart-phones, for groups to keep in touch with each other. Localized protests may also allow for greater attendance—several people I spoke to said that they would like to protest more, but had to travel upwards of two hours to reach the financial district. In many ways, the mobilization of Occupy Chicago mimics the Occupy movement throughout the United States: a series of groups, bound largely through technology, supporting a larger community goal.

Back across the street, the house painter had disappeared. Someone else had the guitar. She was playing “Imagine” and humming. When she saw me watching, she smiled and held out the instrument. “Do you want to join?” she asked.

How to confront money scarcity, secrecy and shame among activists