What are the prospects for civil war where you live? How would you know if the danger is becoming greater? For answers to these questions, turn to Barbara F. Walter’s new book “How Civil Wars Start and How to Stop Them.”

Walter is an international relations professor at the University of California at San Diego. She is part of a group of scholars that’s been studying civil wars around the world. They look at data from different countries relating to dozens of variables, such as income, political parties and ethnic divisions, and seek to find correlations with outbreaks and other features of civil war.

Where, you might ask, are there civil wars? Examples in the past couple of decades include Iraq, India, Lebanon, Ethiopia, Serbia, Afghanistan, Sri Lanka and the Philippines. If you think, well that’s okay, because civil war is not coming to where I live, think again.

Walter’s book is an engaging popularization. As well as citing studies, she tells of interviews with individuals living in countries where civil wars broke out. Despite being right there and being familiar with the local politics, they didn’t see it coming. Sometimes outside researchers, drawing on mounds of data, can provide better predictions — at least in a statistical sense — than people on the ground. 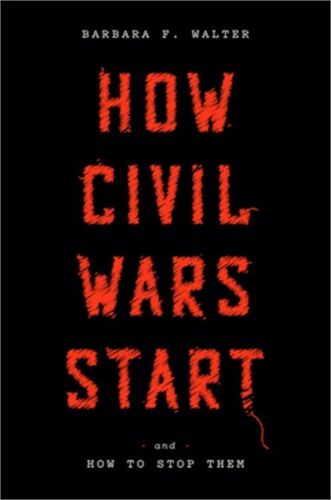 In the U.S., “civil war” brings up images of the war between the Union and the Confederacy from 1861 to 1865, in which well-matched armies fought on battlefields, causing massive carnage. More Americans died in this famous civil war than in any other U.S. war.

Walter counters this picture with another: a guerrilla war in which opponents of the government use hit-and-run tactics against military targets, sometimes operating from a secure base in rural areas. What is the likelihood of this sort of civil war?

Researchers have developed an index that indicates where a country is on a scale from dictatorship to democracy. At one end is a highly repressive regime, and at the other a governmental system with support for civil liberties and processes for orderly change. A country’s index score can vary with time, for example when an autocrat is overthrown or government leaders in a democracy start restricting the rights of political opponents.

After having classified lots of countries according to this index, their scores can be correlated with outbreaks of civil war. It turns out that, according to this sort of analysis, fully functioning democracies are not prone to civil war, but neither are highly repressive regimes. The danger zone is in between, an area called anocracy, a term coined by political scientist Ted Robert Gurr.

Besides anocracy, various other factors contribute to the likelihood of civil war. One of them is the way political groups are organized. It’s safer when political parties have members from a variety of backgrounds. Walter says, “War is even more likely, the experts found, if at least one faction in a country becomes a superfaction: a group whose members share not only the same ethnic or racial identity but also the same religion, class and geographic location.”

Another factor is social media. Those who might be called “violence entrepreneurs,” who push their groups towards using violence, can do this most easily by using social media. Walter notes that people prefer social media posts involving fear, falsehood and outrage.

Yet another factor is the way the political system is organized. Walter refers to a study showing that all democratic countries that had civil wars between 1960 and 1995 had majoritarian or presidential electoral systems, like in the U.S. In contrast, countries with proportional representation were completely spared. Reading this, I felt a bit better about my country, Australia, where the Senate has a limited form of proportional representation and preferential voting occasionally enables the election of minor-party candidates in House seats.

The potential for civil war in the U.S.

While the first half of Walter’s book is about research on civil wars generally, with examples from across the world, the second half looks specifically at the United States. According to the measures used by scholars, the U.S. has moved away from a fully-functioning democracy, towards the danger zone of anocracy.

What is it about the U.S. that worries Walter so much that civil war seems like a possibility? One indication is the rise of a superfaction. U.S. political parties used to be mixtures of various political persuasions, cutting across regional, religious and other demographics. But in recent decades, they have become more unified and polarized, especially the Republican Party. It used to be that many members of Congress voted across party lines, but now bloc voting is used to oppose measures supported by the other party.

Another factor is support for the political system. Before Trump, candidates for office would almost always accept the vote. Trump repeatedly refused to accept defeat and many of his supporters followed suit. This is a warning sign.

Walter says that according to opinion polls, an increasing proportion of people in the U.S. accept violence for political ends. This is another warning sign.

She says civil war in democracies will be guerrilla war. Groups initiating violence feel left out of the political process, and even more importantly had previously held power but saw it being downgraded. “In the 21st century, the most dangerous factions are once-dominant groups facing decline,” Walter states. In the U.S., that means whites, especially those in non-urban areas. As a result, if civil war occurs — according to Walter — it will involve far-right groups with common goals to get the federal government out of their lives, cut back on laws restricting their freedoms and put Christian men in charge, all achieved by using violence.

Should it be called civil war?

In some cases, I have a different understanding of political events than Walter. She says, “Rwanda’s plan to democratize was the catalyst for the Hutu genocide against the Tutsis.” In my reading about the genocide, there was nothing about a government plan to democratize being a factor. More importantly, for years before the genocide in 1994, there had already been a civil war between the Hutu-dominated Rwandan government and the Rwandan Patriotic Front, or RPF, led by exiled Tutsis based in Uganda.

Immediately after the death of the Rwandan president in a plane crash, the Rwandan government initiated the genocide, and the RPF launched an invasion. The genocide occurred during a civil war and was ended by the military victory of the RPF.

In another case, Walter refers to the struggles in East Timor as being a civil war in Indonesia. This is one way to think of them. Another is that, in 1975, East Timor was invaded by the Indonesian military, so the resistance was a war of liberation. Similarly contested is the interpretation of West Papuan struggles.
Walter seems to assume that civil war is always to be avoided, which is sensible at one level. But when one government conquers another, should resistance to the new rulers be included in statistics on civil war?

What about nonviolent action?

Because I’ve studied the use of nonviolent action — strikes, boycotts, sit-ins, rallies and other methods of political action without physical violence — I looked to see what Walter said about this. In a word: nothing. She presents a picture in which the options are either using formal procedures within the system, such as voting, or using violence. “It’s when a group looks into the future and sees nothing but additional pain that they start to see violence as their only path to progress.”

Walter writes, “President Suharto, an authoritarian, was forced to step down after the 1997 Asian financial crisis.” Who or what forced him to step down? Suharto was more than an authoritarian. He rose to power during a genocide in 1965-1966 and imprisoned hundreds of thousands of political opponents. He only resigned because of mass protest. In short, it was nonviolent action that ushered in a parliamentary system to Indonesia.

Researchers studying challenges to authoritarian governments have found that nonviolent movements are more successful than armed ones. What this means is that nonviolent resistance is usually a better option than initiating a civil war.

Prior to the 2020 U.S. presidential election, numerous groups prepared for nonviolent resistance to prevent a coup. This citizen mobilization received little attention, as the media focused on official means for dealing with Trump supporters who rejected the outcome of the election.

This immediately raises some red flags. Many committed nonviolent activists support greater equality and are opposed to racism and patriarchy, and would not want to aid movements in the other direction. If protests and noncooperation are against social justice, should they be called nonviolent action? Does using the term nonviolent action make a cause seem more legitimate?

Whatever the answers to these questions, surely it would be better for those from the previously dominant group in the U.S., who now feel disenfranchised, to use nonviolent rather that violent methods. If so, should nonviolent activists be helping right-wing militias to switch to nonviolent campaigning?

Is it possible to imagine a nonviolent civil war? Well, it probably shouldn’t be called a war. How about a civil conflict?

Despite Walter’s lack of treatment of nonviolent methods and options, her analysis of civil war offers more than enough thought-provoking material for anyone who cares about wars and how to stop them.