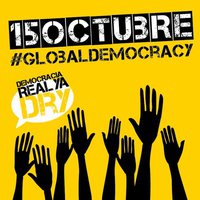 With only a few days left until the global day of action on October 15, people on the streets of Spain are getting ready. They’re at the epicenter of demonstrations being planned in more than 70 Spanish cities for Saturday, together with 869 cities in 71 countries around the world.

In Spain, at least, a lot of attention is focused around the government’s recent cuts in education. A so-called “Marea Verde”—“Green Tide,” because the color of the shirts used in the rallies—began in Madrid at the beginning of the school year in early September. It was promoted by the citizen platform Soy Pública, a teacher’s protest movement against layoffs and longer working hours. Thousands of teachers in Madrid took to the streets and started assemblies in more than 55 institutions. In just a few days, the mobilization spread to other regions like Castilla-La Mancha and Aragón. Following protests of more than 68,000 people in Madrid, others in Toledo, Albacete and Barcelona followed. Now, Soy Pública is getting ready to participate in Saturday’s action.

Meanwhile, university students have been organizing themselves with the assembly model learned from the May 15 movement’s encampments earlier this year. The call to #tomalafacultad—take the faculty—was born a few weeks ago, inspired by the student rallies in Chile, and it has spread through all of the university faculties in Madrid. Among their objectives is to bring more people into the streets on October 15.

The idea of a big mobilization on October 15 was first promoted by the Democracia Real Ya movement not long after the Spanish demonstrations in May began. Since then, its members have been establishing relationships with organizations from around the world. There was a meeting in mid-September in Barcelona, including organizations from UK (Uncut), Slovenia (Rog), Italy (State Generali Della Precarietà) and other countries. Together, they produced a joint statement that will be released on the 15th.

In Spain, September 25 was the day chosen to launch a publicity campaign, coinciding with the actions called for by the Platform for Those Affected by Mortgages. Thousands of people have gathered in the streets in the main Spanish cities to demand for legislation that will stop evictions and excessive payments. The call spread through posters and online social media. Videos have been circulating on YouTube and Facebook in recent weeks, some home-made and others quite professional, created by members of Democracia Real Ya, Anonymous and those who participated in the May 15 movement encampments.

The support of intellectuals has had an important role in promoting October 15, especially through videos in which they explain their reasons for taking part. “We hope that we can be all and that there will be a lot of us this 15th celebrating the sacred right of indignation,” says writer Eduardo Galeano, one of the latest to showing support to the 15-O. Pulpul (the singer of a renowned Spanish ska music band), the members of the Spanish Pop group “Lory Meyers,” the writer José Luis Sampedro, and computer pioneer Richard Stallman are among those who have shared their reasons for protesting.

Meanwhile, hundreds of people arrived in Brussels October 9 after two and a half months of travel by foot. Many began their journey on July 26th from Madrid with fewer than 50 people. But when they arrived to France, three weeks later, there were already more than 100 taking part. In spite of an altercation with the police suffered in Paris—in which close to 120 people were arrested and one of them was badly injured—the march continued on its way to Brussels, where marchers were received by supporters, including the Spanish parliamentarians. On Saturday, we’ll see what this growing  movement, now joined by the occupations in the United States, is capable of.

What good are elections in East Africa?

Spain gears up for October 15