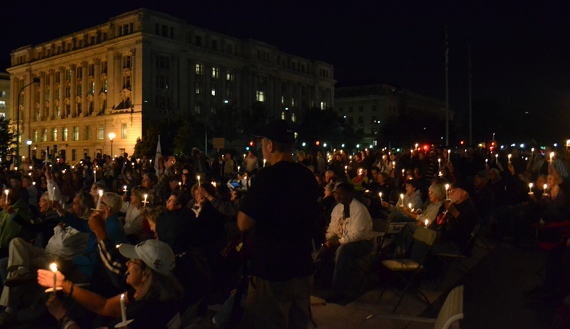 Today—or yesterday, depending on how you count it—marks a decade since the ongoing war on Afghanistan began. Tomorrow marks the end of the third week since the occupation of Liberty Plaza near Wall Street began. The first might be an utterly solemn occasion were it not for the second. And were it not, also, for the occupation of Freedom Plaza in Washington, D.C., which began yesterday and, at nightfall, held a candlelight vigil for 10 years of war.

I wrote about the Freedom Plaza undertaking yesterday in The Nation:

A group of seasoned activists has been planning it for months already, since before the Wall Street occupation was even proposed by Adbusters. And like those in Liberty Plaza, they are intent on staying as long as it takes to be heard.

Before taking to the streets, the October 6 group gained the support of such familiar mass-mobilizers as the Green Party and Veterans for Peace, as well as newer ones like Peaceful Uprising and US Uncut—though they stress that this is a coalition of individuals above all. As individuals, they’ll be having open discussions on Freedom Plaza about 15 “core issues,” ranging from corporatism and militarism at the top on down to transportation.

The first day succeeded in making Washington pay attention. Some 2,000 people gathered at Freedom Plaza, heard speeches and music, and marched to the Chamber of Commerce and along lobbyist-lined K Street. Hundreds spent the night in sleeping bags on the plaza—illicitly, with light police presence. The organizers hold a permit through the end of the weekend, and what will happen after that remains to be seen.

Meanwhile, I’ve been busy writing about the various occupations for a variety of other publications, as well as giving interviews far and wide for such outlets as Al Jazeera, CBC, Pacifica Radio, New York 1, and WNYC’s Brian Lehrer. Here are some highlights:

What the midterms mean for the climate movement

Ohio cracks down on grassroots organizing, causing an unlikely coalition