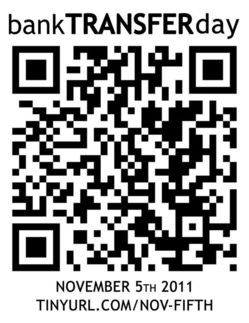 My sister will be 30 on November 5! Happy Birthday, Gal! I remember the day she was born. The school secretary paged the classroom my brother and I were in and said, “Mrs. So and So, please send Frida and Jerry Berrigan to the main office with their belongings. They will not be returning to class today.”

When we got home, there she was, still covered in slime and yellow stuff. She was born at home. She was perfect. Our lives were never the same. Before my brother and I knew it, she was kicking our butts at checkers, running circles around us academically, and then climbing tall cranes and rappelling down others, holding corporations accountable to people.

All of this is an overly long introduction to Bank Transfer Day, which also happens to be November 5. Since it was called for by 27-year-old Kristen Christian, a coalition of groups is now encouraging people to take their money out of Wachovia and Chase and Well Fargo and TD Bank and CitiBank and Bank of America and move to smaller operations like the Randolph Brooks Federal Credit Union or the Bethpage Federal Credit Union (which told The Wall Street Journal that it had signed up 1,500 new customers—twice its usual rate—this week) or the Credit Union of Ohio or Amalgamated Bank, where Occupy Wall Street puts its money.

Daily Finance, an AOL blog, reports that these small credit unions are offering big incentives to attract disgruntled and fee-weary customers from the mega-banks.

November 5 is Art Garfunkel’s birthday, too. He’ll be 70. The great activist and environmentalist Vandana Shiva will be 59. And Kevin Jonas will be 24. November 5 was not chosen to celebrate any of these luminaries (or even my sister) but because that is when the big banks announced they would start collecting new fees from customers. The movement already seems to be working, because The Wall Street Journal reported on Thursday that a number of the banks have backed away from the new fees after seeing the outcry from Bank of America customers and politicians.

But the “Move Your Money” campaign has become about a lot more than avoiding new fees. It is about supporting the local and the small and the community minded; it is about opting for conscience over convenience. It is about not putting money into corrupt and unaccountable institutions, about not letting your money make more money for corporate interests.

Remember that scene in Mary Poppins? When Mr. Banks and the other bankers sing to Michael Banks about investing his money in Fidelity Fiduciary Bank, how his tuppence will help make “railways through Africa, dams across the Nile, majestic self-amortizing canals, plantations of ripening tea”? No child watching that excellent movie understood what the bankers were singing about. All of the strange-sounding fruits of rapacious British imperialism just got sort of stuck in your head as you watched the black-hatted bankers dance.

Our money in CitiBank or Chase doesn’t make many dams or canals or plantations anymore, but it finances maquiladoras and builds weapons factories and underwrites mountaintop removal and funds construction on new nuclear power plants—“all for tuppence, prudently, fruitfully, frugally invested.”

I am not moving my money on November 5. I already have a small bank. It is called Liberty Bank, and it is so local that it closes at 4 p.m. most days—a fact that I cannot seem to get into my head. To make it extra inconvenient, there isn’t even an ATM outside the bank building. But they make up for it by being really nice and paying you back for the ATM fees you incur using other banks’ ATMs.

For that I turn to the experts from Yes! magazine. Those peace-y promoters of all things positive have pulled together “A Field Guide to Closing Your Bank Account” which is both inspiring and practical. For example, after extolling this grassroots campaign in stirring rhetoric, they point out that because November 5 is a Saturday, it is important to get your proverbial ducks in a row before that day, as lots of banks (and almost all credit unions) are closed on Saturdays. (I have that bumper sticker on my car, “Labor Unions: The Folks Who Brought You the Weekend.”) They walk you through it step by step.

The last step? “Stand in front of a full-length mirror. Admire yourself. You’ve earned it.” Oh yeah, and tell my sister (or Art, Kevin or Vandana or someone else you know), “Happy Birthday!”

Anarchism in Egypt, after the Brotherhood

The day to say bye-bye to big banks

Of course there are protests. The state is failing black people.

Immigrants jailed by ICE are winning court battles to get free

COVID-19 sparks a rebirth of the local farm movement

The spontaneous rebellion of low-wage workers exposed to Covid-19