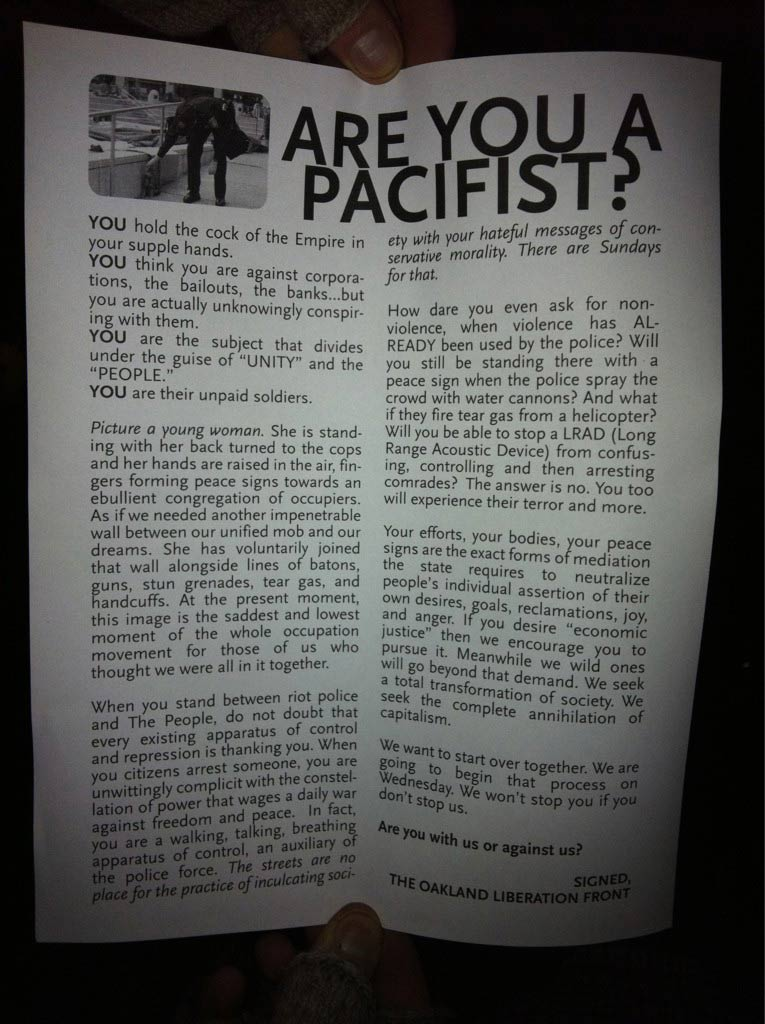 An anonymous group calling itself the “Oakland Liberation Front” distributed a bizarre flyer calling for violence over the last couple days at the General Assembly in Oakland. The leaflet says that pacifists are “unwittingly complicit with the constellation of power that wages a daily war against freedom and peace,” argues that they are inculcating society with “hateful messages” and asks: “How dare you even ask for nonviolence, when violence has ALREADY been used by the police?”

Boing Boing’s headline captures how most have seemed to respond to it: “Creepiest anti-nonviolence leaflet ever handed out at an Occupy. Ever.” The SFist called it “Yucky” and “rather icky,” while some immediately suspected that it was the work of provocateurs intent on disrupting the planned general strike today.

While it could be the work of provocateurs, as police have been caught infiltrating the movement in Oakland, it could just as easily be the work of those on the left—like Ted Rall, who just published this idiotic comic with a similar message—who still see violence as liberatory. From just a purely strategic perspective, how they see engaging in violence, and confronting the state on its terms, as wise is beyond me. Violence is what the government is good at. It’s what they prepare for. It also allows the security forces to crack down with less of a burden on their consciences and will often justify their actions to the wider public. This will in turn limit the number of people who will join the movement as a result. The state is in general relieved when protests turn violent (and will do what they can to instigate violence) for primarily these reasons.

Thankfully, Boing Boing reports that the “very very creepy” person distributed these flyers to a “not-receptive audience,” and the protests in Oakland today have not devolved into the chaos and violence that those behind this leaflet hoped for. In fact, as Adam Gabbatt has just written for the Guardian’s live blog, when some protesters outside of Bank of America today:

voiced their desire to smash the bank’s windows; other protesters stood in front of the bank and prevented them from doing so.

These are remarkable acts that show just how committed to nonviolence the movement as a whole is and have kept Occupy Oakland on message.

How to un-do a ‘done deal’ with Strategy and Soul

Is it OK to have a happy place?

Calls for violence once again turn people off