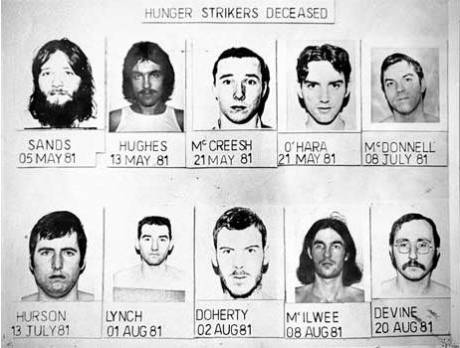 I can’t remember the first time I heard the phrase “hunger strike.” I think it must have been when my dad went to Northern Ireland in the early 1980s to try and visit the men held in the Maze prison. My brother and I had a record of Irish political songs (are there any other kind?) and one told the story of Bobby Sands and the other men who refused to cooperate with the terms of their imprisonment. They refused to wear clothes, eat or use the bathroom. (They called it “being on the blanket” because they wore blankets instead of prison uniforms.)

In my child’s mind, I did not understand why anyone would do all of this—isn’t being in jail bad enough? Later I learned that they refused to eat or cooperate until they were recognized as political prisoners. The British government, which was occupying Northern Ireland, treated them like common criminals—no different from anyone else who had broken the law—but they saw themselves as a rival military force who, once apprehended, had to be treated in accordance with the Geneva Conventions strictures on holding prisoners of war. That is why Bobby Sands died, because the British would not treat him like a prisoner of war.

Dad and his brothers were not allowed to visit the men. Soon after, Bobby Sands died—starved to death in jail. Ten men ultimately died of starvation in the British jail—Francis Hughes, Raymond McCreesh, Patsy O’Hara, Joe McDonnell, Martin Hurson, Kevin Lynch, Tom McElwee, Kieran Doherty and Mickey Devine. Some activists gave Dad a leather wallet hand-tooled with Irish symbols that was made in the prison. My sister carries it now—worn, splattered with paint, splitting from decades of use and still beautiful.

The first men were brought to Guantanamo on January 11, 2002—almost ten years ago today. In the early days of the War on Terror, as American bombs pummeled Afghanistan and the Northern Alliance thugs, and corrupt Pakistani security forces rounded up Arabs and Muslims as terrorists, the Bush administration found Guantanamo a convenient off-shore prison, far from American law. The administration created the convoluted term “Enemy Combatant” so as to do just what the British did—avoid the Geneva Conventions laws around the treatment of prisoners of war. Cut off from their families, abused and tortured on unfamiliar and foreign territory, and isolated from the media and lawyers, the men at Guantanamo found that the hunger strike was one of the few tools they could use. By 2005, as many as 200 men were engaged in hunger strikes at the U.S. naval base.

“My wish is to die,” Adnan Farhan Abdullatif, a 27-year old Yemeni, told his lawyer. “We are living in a dying situation.”

“We don’t have any rights here, even after your Supreme Court said we had rights,” Majid al-Joudi, one of the hunger strikers reportedly told a military doctor. “If the policy does not change, you will see a big increase in fasting.”

It was a harrowing and somewhat effective tool of political protest—a violence done only to one’s self, a self-inflicted violence that dramatizes and makes visible the over-arching violence of indefinite detention, constant interrogation, hateful scape-goating and worse.

The first wave of hunger strikes ended when the Guantanamo turnkeys met with the men and conceded to allow them to pray, promised to give them Qur’ans, and offered better living quarters. The men resumed their hunger strike when those promises were broken. The Center for Constitutional Rights documented the waves of hunger strikes in a 2005 report. Over the years, men at Guantanamo have continued to hunger strike and have been subjected to forced feeding regimes.

In September of 2011, the BBC received a letter from Shaker Aamer and eight other Guantanamo prisoners, who stated their commitment to hunger striking. Aamer, a British resident who has been at Guantanamo for nearly 10 years, writes:

After these years of hardship that we have spent here—we want you to consider our cases as soon as possible and give us the right to a just and a public trial or set us free without conditions.

The men go on to describe their situation:

Inhumane treatment is taking place at the hospital among other areas, especially affecting the sick and those who are on (hunger) strike and our deprivation of real treatment, health, diet and appropriate clothing which are not provided to us, nor we are allowed to provide them for ourselves.

Much more recently, prisoners throughout the California system launched a hunger strike to protest long periods of solitary confinement and other forms of mistreatment. At the height of the hunger strike, which began in July, there were as many as 12,000 inmates skipping meals in at least eight California prisons according to the Prison Hunger Strike Solidarity Group.

“We believe our only option of ever trying to make some kind of positive change here is through this peaceful hunger strike,” said Todd Ashker, one of the strike organizers who is incarcerated at the Pelican Bay prison and who organized the strike. “And there is a core group of us who are committed to taking this all the way to the death if necessary.” No one has died, and the strike was called off a few weeks ago after prison authorities agreed to review the policies for solitary confinement.

Half a world away, Maikel Nabil Sanad continues to go hungry. The young Egyptian is a pacifist and conscientious objector, whose blogging and reporting was critical of the military before, during and after the revolution. In April of this year, he was sentenced to three years’ imprisonment by an Egyptian military court. His crime: reporting about ongoing human rights violations and political influence of Egyptian military. He began his hunger strike on August 23, explaining in a brief statement that he would refuse to eat until he died or was set free. On November 1, hearings in Sanad’s case were again adjourned until the 13th, even though he has already been on a hunger strike for more than 70 days.

Just this week, the mother of another imprisoned Egyptian writer and activist, Alaa Abdel-Fattah, began a hunger strike. On day four, Laila Soueif told the Associated Press that she was good:

My blood pressure is stable, but I will continue the hunger strike until Alaa is freed … It is becoming clearer and clearer that the military council is against the youth of the revolution and wants to make an example of Alaa so the rest will be silenced.

Her daughter added that the 57-year-old woman is drinking tea without sugar or milk and smoking cigarettes to keep going.

Again and again throughout history, in every corner of the globe—from Lagos to Los Angeles and everywhere in between—suffragists, civil rights activists, advocates for the homeless, prisoners and farm workers, stop eating and start organizing. They’re hungering for more than food, hungering for justice, peace and recognition as human beings. As the New Mexican author Sharman Apt Russell writes in Hunger: An Unnatural History, “What else can the powerless, the weak and disenfranchised offer up to the world but their own soft bodies?”

Syriza succeeds in Greece by mainstreaming the anti-austerity movement