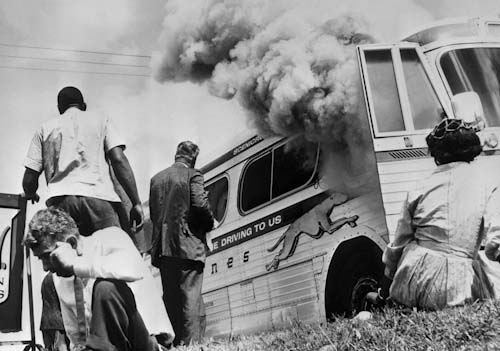 The day after Mothers’ Day, May 14, 1961, the front-page picture of a Greyhound bus engulfed in flames galvanized the American public. It was Anniston, Alabama, and Klansmen had fully intended to burn the freedom riders alive. For the first time many Americans realized the full depth of hatred faced by black southerners—and those who came to help them.

Right now two videos may be having a similar effect. They show shockingly savage attacks on students by the police; at Berkeley, we see protesting students with linked arms being jabbed and beaten by police “batons” (as poet laureate Robert Hass pointed out, this is not an orchestra and those are not batons—they’re clubs). At Davis it’s a line of seated, peaceful students being casually doused with pepper spray by an apparently impassive police officer.

If the salutary shock of this confrontation were to wake up the public as the photo of the burning bus succeeded in doing in 1961, what might they learn? I think, three things.

1. This is just the surface of a much bigger problem. As I write, the U.S. Senate is getting ready to debate, and hopefully reject, S. 1867, the National Defense Authorization Act, which would give all future Presidents the right to do what President Obama has already done: to assassinate American citizens without trial, anywhere—including on American soil. This bill, which was drafted in secret by Sens. Carl Levin (D-Mich.) and John McCain (R-Ariz.) and passed in a closed-door committee meeting, without even a single hearing, is only the latest step in the noose of militarization that has been tightening around our freedoms (or our very lives) since 9/11. In an article entitled “SWAT Teams, Flash-Bang Grenades, Shooting the Family Pet: The Shocking Outcomes of Police Militarization in the War on Drugs” that appeared on Alternet recently it was pointed out that there are more than 50,000 police paramilitary raids in the US each year—more than 130 every day, mostly for prosecution of drug warrants. The first lesson an awakened public should draw from the scenes at Berkeley and Davis is really that there’s no such thing as “appropriate” violence that can be contained in a corner and not spill out where we don’t want it—or more accurately, where we are forced to recognize what it really is.

2. And the next lesson is similar to the first, for an illusion has been spun around the wonder-weapons of modern warfare: pilotless drones. In a highly significant disclosure by the Fellowship of Reconciliation, drones, designed to allow us to kill “others” without endangering ourselves, are already in use for border surveillance, and from there the next step has already been taken: a Texas Police Department recently acquired a drone with taser capability. Others have submitted their requests across the country. Violence that we hurl at others—and make no mistake, the cowardly aspect of drones means that they are a form of violence, possibly one of the worst, in Gandhi’s view—comes back. As the Buddha said, to hate another is to throw sand up in the air: it must come back upon the thrower.

But not all the lessons of the photos are negative. One is downright inspiring.

3. When I heard from Mica and Hayden, two of our Metta volunteers, how they and the other students stood up to shockingly brutal treatment without retaliating, I immediately thought of that highpoint of modern nonviolence, the “raid” on the Dharsana salt pans in Gujarat, India on May 21, 1930. That event, where Satyagrahis walked resolutely into certain beatings for hours together without retaliating, marked the end of British control in India—arguably the end of colonialism in its classic, overt form.

Since then an even more dramatic scene has unfolded at Davis, where a large group of students were on the verge of a violent confrontation with a smaller (doubtless frightened) line of police. The police were menacing the students with shotguns armed with another sub-lethal type of ammunition, when one of them shouted “mic check” and proceeded to have them all in unison say to the police that they were giving them “a moment of peace” in which to leave. And the police left!

So far, the students say they are using nonviolence (or at least that’s what’s reported in the press) because it gives them “the moral high ground.” In other words, it’s a winning strategy. If—no, when—they take the next step and realize that nonviolence is the only force that rehumanizes as it works, that can permanently reverse militarism and not just give it another form, I believe nothing will be able to stop them.

The freedom riders delegitimated racism; perhaps this generation, with their creativity and their courage, will delegitimate violence itself.

The Art of #BlackLivesMatter