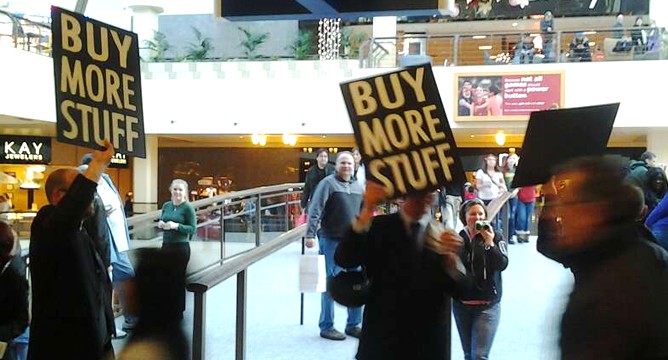 Twenty more innocent people were pepper-sprayed last week, although not by police cracking down on protesters this time, but by a woman fighting for a discounted Xbox at Walmart.

This was only one of many violent incidents that marred Black Friday last week, as throngs of crazed consumers hit stores across the country to get the best deals of the year, on what turned out to be the biggest day of shopping ever.

In an effort to push back against the frenzy of consumerism that overtakes our country every year at this time, Adbusters used the 20th annual Buy Nothing Day to kick off their latest campaign: #OCCUPYXMAS.

As part of Occupy Christmas, Adbusters editor-in-chief Kalle Lasn suggested a few “shenanigans” that participants might pull off to the Toronto Star, including:

— a Santa sit-in, whereby protesters sit outside a store and encourage people to cut up their credit cards;

— a Jesus walk, where people put on a mask in the Holy Son’s likeness and walk through malls, to create an eerie sentiment;

— a “whirly mart,” in which would-be shoppers fill their carts with products but abandon them at the cash register.

Additionally, Abusters has called on readers to continue to move their money from big banks to credit unions or smaller local banks as “one great first step in breaking beyond the encampments and into the new Xmas imagination.”

Indeed, Bank Transfer Day earlier this month was a resounding success. According to a survey by the Credit Union National Association, in just the month preceding Bank Transfer Day, at least 650,000 people moved their money—totaling $4.5 billion in new deposits—to credit unions (as opposed to 80,000 new customers in a normal month), which inevitably underestimates the real impact of the campaign.

Occupy Christmas kicked off on Buy Nothing Day