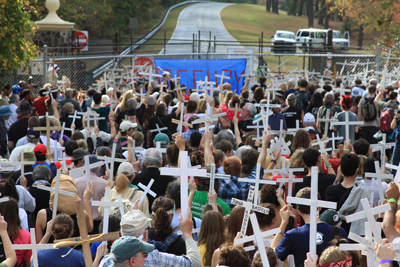 “Somos una América, we are one America,” chanted the thousands converged at the gates of Fort Benning to protest the School of the Americas (SOA) during the annual rally and vigil in Columbus, GA. The weekend of teach-ins, speakers, concerts, films, art, and social action is organized by the School of the Americas Watch and, for years, has been the largest annual convergence for justice in North America. Graduates of the SOA have been linked to horrific human rights abuses in Central America—torture, disappearances, executions, rape, coups—for many years. The recent coup in Honduras was orchestrated by graduates of the SOA and Time magazine recently reported on some of the school’s notorious alumni.

Crowd estimates from organizers for the Sunday morning “presente” memorial vigil were around 5,000—much lower than years past, where attendance once peaked at 20,000. The Columbus Police Department reported 3,007 people. But that does not mean the movement to close the SOA and resist militarism is waning. “We can’t get caught in the numbers game,” said SOA Watch field organizer Nico Udu-gama. “This is an anti-imperialist struggle that has ebbed and flowed over the years and is part of the movement that is waking up around the world.” SOA Watch has changed over the years but a few things have remained consistent in one form or another: direct action, solidarity across the Americas, and a view towards the long haul.

Since 1990, when the convergence began, thousands have crossed the line—risking trespass charges on the military base and federal prison time—as an act of conscience and to put the SOA on trial in federal court. Over 300 people have been sentenced to over a collective hundred years in prison. This year, one person, Theresa Cusimano, 43, climbed over the barbed-wire fence on a make-shift ladder. She faces up to six months in prison, if convicted. SOA Watch is planning direct action training in April 2012 in Washington and hopes to capture some of the budding energy in the Occupy movement to break the culture of militarization we are in. It is also drumming up attention for HR 3368—which would cut the school’s funding and free millions of taxpayer dollars that fund it.

The SOA rally—often criticized as a catch-all gathering for justice issues and being a place for “tourist activism”—is entering a new phase where its analysis and incorporation of the interconnectedness of global injustices makes for a diverse and exciting cross-country struggle. SOA Watch has field offices throughout the Americas and has played a leading role in organizing “encuentros” for social activists and anti-militarism resisters to build relationships of solidarity and share best practices and organizing skills. Struggling against racism within the movement, more and more of the speakers, workshop presenters and leadership are people of color while white allies continue to explore the roots of oppression and domination not just at a structural level—such as is modeled by the SOA rally—but in individual relationships as well. A new film from SOA Watch, Somos Una América, documents the incredible movement that exists outside of one protest weekend in November in Georgia.

Because SOA Watch sees itself as an anti-imperialist struggle, it’s in it for the long haul. “This movement is about more than just closing the School of the Americas,” said former prisoner of conscience Friar Louie Vitale, OFM. “It’s about saying no to torture, no to empire.” Critics of the movement—and supporters like the Ignatian Solidarity Network who moved their teach-in to Washington D.C. in 2010—suggest that the continued presence in Georgia is not the most effective place for putting pressure on the politicians with the power to close the SOA (which was, incidentally, renamed the Western Hemisphere Institute for Security Cooperation in 2002).

While some truth resides in that perspective and SOA Watch has increased its presence in Washington, such critique misses some key points. The annual gathering in Georgia is an energizing and healing weekend for many activists. It is a time to connect and build community; to mourn and remember the thousands who’ve been killed by the state-sponsored terrorism across the Americas; and to celebrate those who resist it—including ourselves. The rally and vigil are a source of sustenance for the thousands of activists who work diligently around the world the rest of the year and the SOA Watch gathering helps keep them going. It also continues to attract new folks, especially young people. With hundreds participating in the student/youth caucus and working groups, a new generation is radicalized into the anti-imperialist struggle.

“We are in a politicizing moment” said Udu-gama referring to the global Occupy Movement. Representatives from occupations across the region came for the weekend to “Occupy Ft. Benning.” The Columbus Ledger-Enquirer speculated that numbers were down in part because of Occupy. But that is a good thing because it means people are acting locally, noted Udu-gama. The energy and rhetoric of the Occupy movement was present during the weekend on signs and banners and in speeches and songs. “The School of the Americas protects the 1 percent. It is the military muscle backing unpopular economic policy [like the neoliberal Free Trade Agreement of the Americas] and the connection between economics and militarism is key for the continuation of imperialism,” said Udu-gama.

Looking forward, the School of the Americas Watch movement is popularizing resistance to the deeply-rooted militarism in the Americas and worldwide. As citizens around the world are rising up against anti-democratic forces that put economic and military interests of the few above the lives, rights, and dignity of the many, grassroots organizations like SOA Watch—that are simultaneously broad-based and issue-focused—are increasingly more relevant for educators, organizers, and activists in the struggle for justice, peace, and democracy.