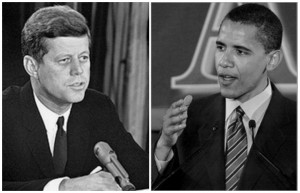 On June 11, 1963, President John F. Kennedy addressed the nation on the issue of civil rights and declared, “We are confronted primarily with a moral issue… as old as scriptures and… as clear as the American Constitution.” The president had long viewed civil rights as a historical injustice and private moral issue but this was the first time Kennedy embraced civil rights as a public moral issue. JFK refused to take comprehensive federal action to stop racial violence and segregation for nearly two years. It took thousands of brave civil rights activists waging nonviolence to educate the president.

Today the American people are in a similar position with Obama’s intransigence on environmental justice. President Obama has acknowledged the danger of our fossil fuel addiction and the necessity to fight climate change. But Obama has failed to take an ethical stand. Obama must be clear that environmental justice is a public moral imperative that demands action. Man-made climate change threatens the existence of every species on Earth and immediately threatens the most vulnerable and impoverished human beings. The proposed Keystone XL pipeline running from the dirty tar sands of Alberta to the American Gulf Coast is currently the greatest obstacle to stopping climate change. If we don’t stop the pipeline, NASA climatologist Jim Hansen said it’s “game over” for stopping climate change. Stopping climate change is the greatest moral imperative that challenges humanity.

Between Kennedy’s presidential campaign in 1960 and his speech embracing civil rights as a moral issue in 1963, civil rights activists fought to awaken the conscious of the nation. During the sit-ins of 1960, thousands of African American students and youth endured intimidation, physical violence, and jail for the right to eat at a lunch counter. While he was campaigning for the election of 1960, JFK told the nation that he supported the sit-ins. Shortly after being elected though, Kennedy allowed dozens of “Freedom Riders” to be beaten and their bus firebombed as they attempted to desegregate interstate travel throughout the South. Despite thousands being jailed and beaten, activists kept pressuring Kennedy. In 1962, James Meredith enrolled as the first African American at Old Miss. Meredith’s courage to demand equal rights and a good education was met with a mob of thousands of violent segregationists. President Kennedy was forced to call in 23,000 federal troops to restore order. Slowly civil rights activists were forcing the president to act. Martin Luther King’s 1963 Birmingham campaign was the tipping point for the movement and Kennedy’s consciousness. After men, women, and children were blasted with fire hoses, shocked by cattle prods, and mauled by attack dogs, President Kennedy came to see civil rights as a moral imperative that must be urgently addressed.

Despite inspiring millions of youthful Americans, when Kennedy assumed the presidency in 1961 his actions and rhetoric ignored the issue of civil rights. Like Kennedy before him, Obama tapped into the deep well of American optimism and gave hope to millions. Yet also like Kennedy, Obama has simply paid lip service to the most important social justice issue of our day, environmental degradation. In many ways Obama has been more disingenuous than Kennedy. JFK never promised the nation that he would call for civil rights legislation or commit federal troops to enforce desegregation. Obama promised the nation that he would free us from the “tyranny of oil,” “heal” our dying planet, and “slow” the rising oceans. If Obama allows the Keystone XL to be built, he would further addict us to oil, scar our dying planet, and contribute to the rising ocean.

Like the civil rights activists and JFK, our current environmental movement (if you want clean air, fresh water, and a toxin free atmosphere, welcome to the movement) must engage in nonviolent direct action to convince President Obama that climate change is a moral injustice. Today a historic direct action campaign is currently underway to stop the proposed Keystone XL pipeline. 1,253 courageous citizens have already been arrested to arouse the conscience of the nation. Yet this is only the beginning. Without direct action and the suffering of thousands of activists, Kennedy would not have been driven to catharsis.  Kennedy’s timid stance on civil rights had the effect of emboldening civil rights activists and elevating the importance of nonviolent direct action. We too must continue to be emboldened, inspired by the imagination of eco-activists like Bill McKibben and Tim DeChristopher, and focused on waging nonviolent direct action.

Through our dedication and suffering, President Obama will come to see environmental devastation as a public moral imperative. President Kennedy understood that “We face… a moral crisis as a country and a people.”  With each sit-in, teach-in, lock-out, and bold act of environmental civil disobedience, we will arouse the conscience of this nation. We will give our president an ethical education and stop this pipeline for the sake of all of humanity.

What Turkey reminds us about tear gas

What role were you born to play in social change?

The moral education of a President