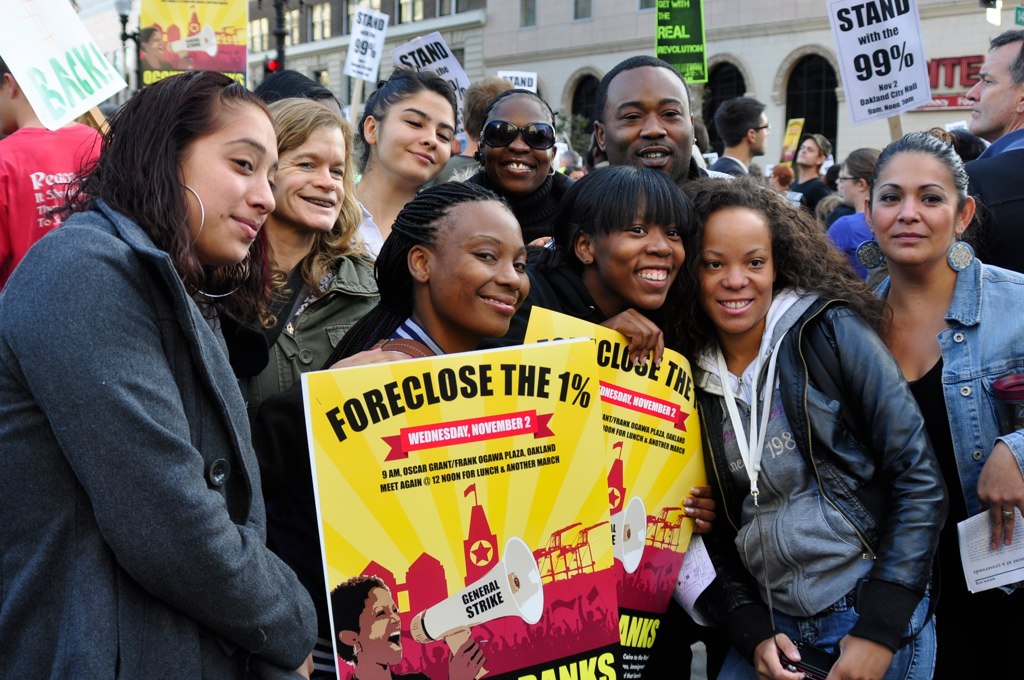 My friend Anna Graves just sent me this link to photos she took during Occupy Oakland’s general strike on November 2. In our hyper-drive world, last week’s news is usually dead and buried, but even today it takes a while to drink in the real significance of something, especially when a certain take has already carried the day. Anna’s pictures offer us another chance to reflect on the import of this powerful public drama for economic equality.

So far, the meaning of the one-day strike has largely turned on the issue of violence and nonviolence, as Wayne Grytting summarized it on this site:

Occupy Oakland’s first attempt at a general strike began with press coverage that had supporters high-fiving across the country. Then came the hangover. Once again we watched as angry black bloc anarchists hijacked the media message. From the powerful pictures of protesters standing atop cargo vans, headlines of a shut down port and accounts of up to 10,000 peaceful marchers—including a children’s brigade of marching toddlers—we went to scenes of fire and chaos in the streets.

The midnight battlefront engineered on the streets of Oakland after most demonstrators had gone to bed was not, I suspect, a case of mindless rage. It was instead a strategic bid to define and control the message and meaning of the Occupy movement. And, as Grytting’s reflection stresses, the frame used by the media (which is already predisposed to see most protest through a crime story lens) ultimately ditched the early positive reporting and settled, predictably and understandably, for anarchy and street battles. The final storyline—and judgment—featured broken windows more than a broken financial system.

Since then, there seems to have been a good deal of soul-searching about how this went down—and a search for approaches that esteem the open culture of the Occupy movement but also respect the participation of all in a climate promoting nonviolent change. Most of this will likely be structural. For example, there is some talk about clear declarations of nonviolence (and why it matter), as well as explicit nonviolent action guidelines, trainings, and peacekeepers skilled in de-escalation tactics.

But an even more important aspect of this work will be to relentlessly unpack Occupy’s primal intuition: that a deep and monumental shift in the economic and social order is called for, and this will require disciplined but also creative and compassionate effort. Its job therefore is nothing less than to invite our society to imagine a new way of being, and to do so by alerting, educating and mobilizing the larger citizenry. It does not pretend to know what this will look like. Instead, it is trusting that this way of deep transformation will emerge from processes and practices of participatory democracy. The Occupy movement is engaged in a profound wager that change will rise from this engaged experiment. 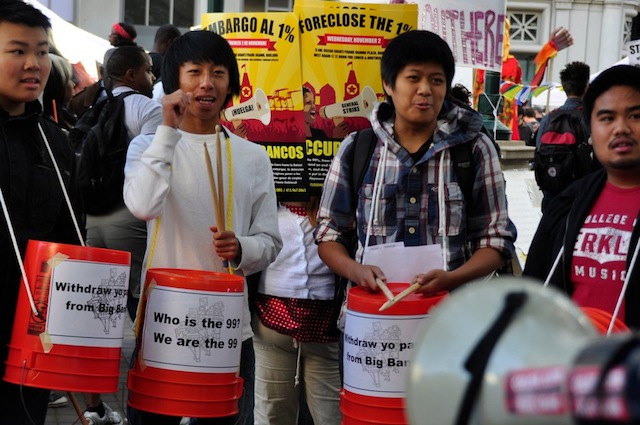 That’s why I am moved by Anna’s pictures. They visualize this wager and help us imagine in a small way what this emerging vision and practice might look like.

Taken together, these images comprise a tapestry of determination, care, composure, and exuberance. If not solemn, the marchers are nonetheless serious. These visuals communicate the critically important work at hand—calling out the financial structures and policies that have led to unemployment and a mortgage crisis for millions.

But there is a lightness, too, as if the burden of the present crisis, and the labor it will take to make it right, is being shared across the thousands of marchers. A sense of expectation and confidence pours from these pictures, a spirit conveyed even by the slightly surreal touch of a pair of tuba players wading into a sea of occupiers to confront—or serenade?—the trucks that have been stopped at the fifth busiest port in the country. 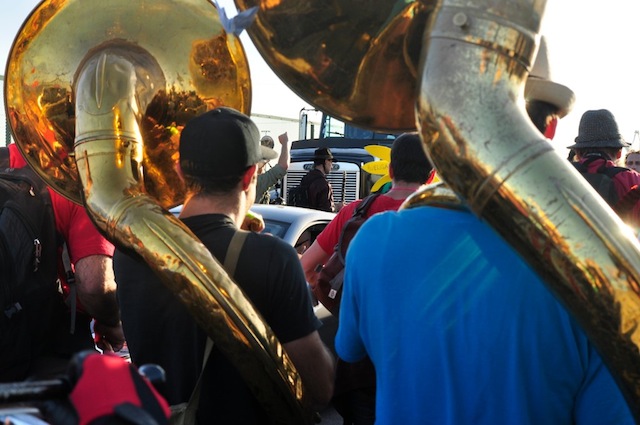 These pictures offer a stark contrast between an old school “negative rebel” strategy and the Occupy movement’s gamble that its work is to promote a new community symbolized by the encampments that have sprouted across the U.S. and beyond, glimpsed, for example, in Jason Flores-Williams’s exhilarating essay, “In the Battle of the Open Heart” and in a stirring update of the classic standard “At Last.”

I live in Chicago, but for two decades Oakland and other parts of the San Francisco Bay Area were home. Anna’s pictures snap back into place memories of nonviolent action in Oakland. Civil disobedience at the federal building opposing U.S. policies in Iraq. Demonstrations at the port and the former Oakland army base. Joining Dignity Housing West in taking action to see that HUD-repossessed houses became available to low-income families below the poverty line rather than to real estate speculators. (The recollection of being abruptly awakened by an Oakland police officer, who kicked the door in sometime after midnight and arrested us for our nonviolent occupation of a house in East Oakland, remains vivid. In the end, a family below the poverty line made their home there.)

Anna’s pictures spark these remembrances of movements and actions and campaigns that came before—but they also convey that something new is rising, something broader, richer, and bearing the potential for helping to nurture the sea change that our time requires.

These images of “something new”—of connection, of courage, of conviviality, of community brought alive in the streets of Oakland—can perhaps deepen our understanding of “occupation” itself. In his essay entitled “The Street Is for Celebration,” the monk and poet Thomas Merton in the late 1960s reflected on the modern urban environment and how its organized space is deeply alienating. Intriguingly, he contrasts “occupied space” with “inhabited space.”

“The quality of a city,” he writes, “depends on whether these spaces are ‘inhabited’ or just ‘occupied.’” For Merton, to inhabit is to dwell, to connect, to be fully present and alive, to experience joy, to create a common identity. When we inhabit in this sense, he suggests, the street is no longer “a mere tube through which a huge quantity of traffic is sucked down toward the glass walls where business happens.” It is, instead, a place of celebration.

Anna’s pictures convey how the movement in Oakland has enriched the word “occupy.” It is more than filling space or being crowded into a grid set out by the powers that be. And it’s not a space for pitched battles that simply mirror the worn cycle of violence that tends to reinforce, rather than change, systems of violence and injustice. 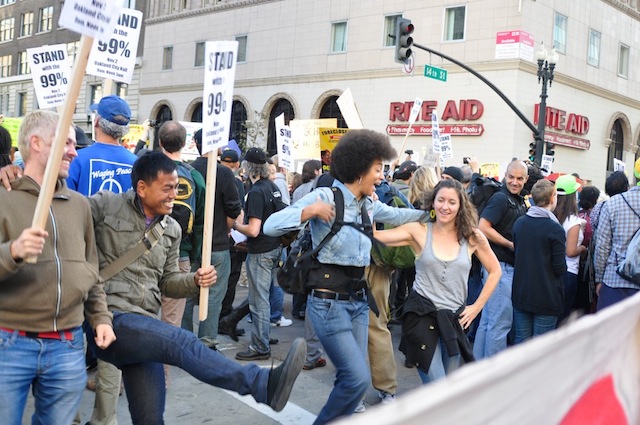 Rather, it is a place for hope and imagination and even, as these images suggest, festivity.

On November 2 thousands of people in Oakland transformed alienated space—structured and enforced by the rules of an existing economic order that does not serve all of us—into occupied space in its deepest and richest sense: an inhabited landscape of connection and creativity dedicated to celebration and urgently needed change.

The photos featured in this post are by Anna Graves, a photographer who lives in Berkeley, California. She can be reached at sunlight@lmi.net.

Surviving the ups and downs of social movements

The street is for transformation