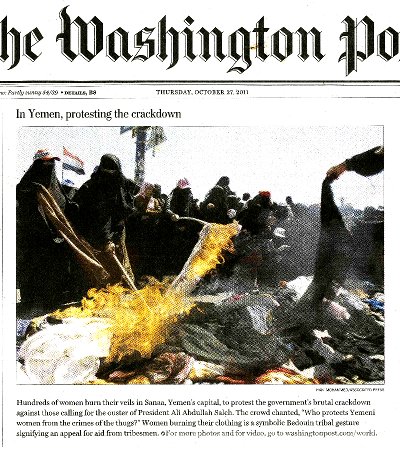 A photograph on the front page of The Washington Post on October 27 showed Yemeni women burning their veils, a Bedouin tribal expression that appealed for assistance from tribesmen. With this action, the women appear to be saying that the official powers that ought to be safeguarding Yemeni women citizens instead are attacking them. The Associated Press photo, part of a gallery of shots of Yemeni women’s nonviolent actions, is visually stunning. While some onlookers might assume that the veil is a symbol of repression, to these Yemeni women it is part of their means of empowerment.

Yemen’s ongoing struggle is indicative of this year’s larger Arab Awakening in the way that women have assumed responsibility for speaking out politically.

My first awareness of Yemen’s Tawakkul Karman was a video made in Sanaa, Yemen, this past spring. In it (starting at about the 13-minute mark), her husband Mohammed explains that when they married she made him promise not to stop her from participating in public affairs, and he agreed. “She does something that I couldn’t do so I support her in everything she does,” he told Al Jazeera. He takes care of their three children and handles the callers on her cellular phones—plural—so that she can focus on the tasks of leadership. In October, we learned that Karman was one of three women who won this year’s Nobel Peace Prize, along with two Liberian women leaders, Ellen Sirleaf Johnson and Leymah Gbowee, for their work in nonviolent struggles for women’s safety and rights, as well as participation in building peace. A journalist and human rights advocate, Karman has become the personification of the Yemeni civil resistance struggle.

Karman’s organization, Women Journalists without Chains, was set up in 2005, and has maintained dual goals of a free press and a broad human rights agenda. She and her colleagues have been working for press freedoms and staging weekly sit-ins to demand that political prisoners be released from jail—a place with which she is well familiar—every Tuesday from 2007 until Yemen’s upheaval began earlier this year. In addition to addressing press freedoms, her group has demanded that inquiries be conducted into corruption and other manifestations of social and political injustice.

“I was threatened through phone calls, letters, even text messages. They said I’d be imprisoned or even killed if I did not stop causing inconvenience. But I consider taking my right to expression away far worse than any form of physical violence,” Karman told London’s Guardian. A few months later, in October, she met with U.N. Secretary-General Ban Ki-Moon to express her fears, shared by the kaleidoscopic Yemeni opposition, that the world body will accept the contours of the Gulf Cooperation Council (GCC) plan that was advanced in April. The GCC plan, supported by the United States and Yemen’s GCC neighbors, would permit legal immunity for President Ali Abdullah Saleh, whose abuses, crimes and atrocities against Yemeni civil resisters have only worsened in the period since spring.

In a remarkable convergence, and in a region thought to be impervious to nonviolent citizen action, the Arab Awakening has disclosed dynamic levels of participation of women in national struggles, called attention to the crucial importance of freedom of expression and a free press, and—as the Yemeni women on the front page of the Post show—introduced innovative uses of traditional symbolism in protest.

The use of symbols in actions designed to protest and persuade varies from culture to culture and setting to setting. It can also be affected by the sequencing of tactics and the stage of the struggle. Christopher A. Miller, in his handbook for African trainers of trainers, has distilled a range of such symbolic methods:

Symbolic tactics are explanatory as well as communicative. Their effectiveness can rely upon merely gaining attention, but often they actually play a role in guiding the course of a movement.

Miller’s handbook points out that the 1986 mass demonstrations in the Philippines were not as momentous in compelling President Ferdinand Marcos to resign as they were in drawing international attention and support to measures that ultimately pulled the power out from under him and led to his departure. These demonstrations also put the police services, security apparatus and military forces—which were responsible for enforcing sanctions—into a predicament in which they had to choose between defending the people or the regime.

Marches, processions and demonstrations—or any other method of protest and persuasion—do not attain objectives on their own, however. They must be utilized in concert with clear communication of the grievance and other methods that undermine or attack the bulwarks of support for an opponent. Used on their own, they may only throw light on specific issues. Although these methods are normally the first to be used in a nonviolent struggle, certain actions of this kind are also generally conducted throughout the course of a campaign.

Symbolic protest, especially when drawn from a treasure trove of traditional customs, can be a powerful way of combating the suppression of freedom of expression. Traditionally-sanctioned acts, such as the burning of the veils, can be especially well-suited to fighting repression. Their familiarity and antiquity makes them harder to suppress, and their legitimacy in the culture may actually be stronger than the present regime’s. The scope of symbolic methods of protest and persuasion, traditional and otherwise, is almost endless.

The power of the pregnant body

Did the president’s speech signal a turning point?