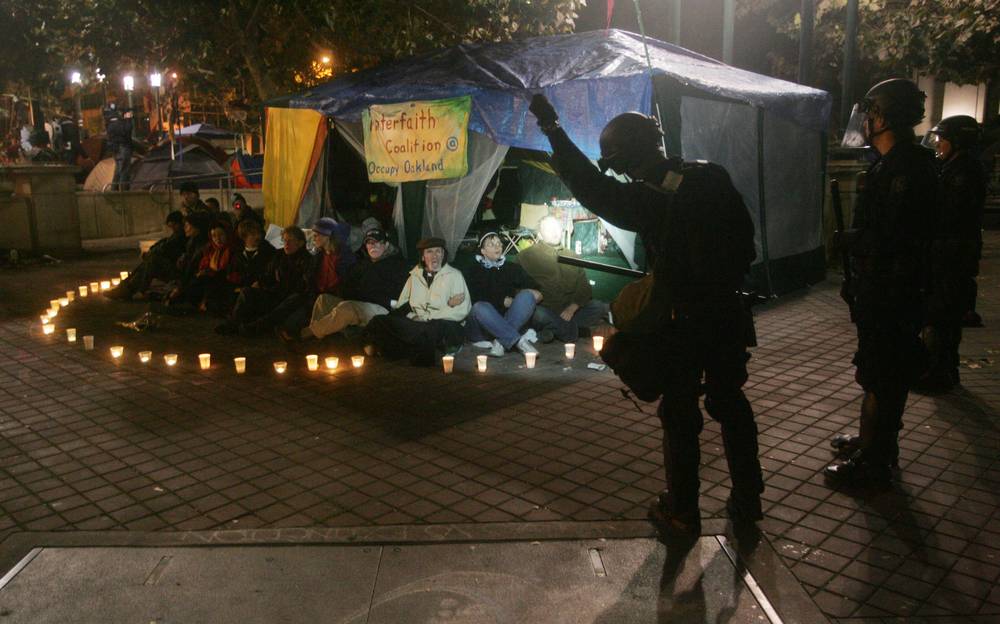 This week, as the hammer was falling on Occupy sites across the nation—including in New York, Denver, Salt Lake City, and Portland—my friend and colleague Friar Louie Vitale heard that the Oakland police were about to storm Occupy Oakland for the second time in two weeks. He had just celebrated mass for some of those about to travel to Fort Benning in Georgia (for the annual witness at the School of the Americas) when he learned that the police action was imminent. He got a ride to Oscar Grant Plaza and headed to the Interfaith Tent where he joined fellow clergy in prayer and song and silence.

With a semi-circle of flickering votive candles at their feet, the religious leaders stayed put as the police assembled nearby. They sang “Amazing Grace” and “Down By the Riverside.” Mostly they kept vigil as the police cleared the site, dismantling scores of tents and rousting people from the plaza.

The Interfaith Tent was established some weeks ago to support and minister with the Oakland occupiers. Members take regular shifts and hold weekly planning meetings. Now they were taking this ministry to another level by being some of the last to occupy the plaza and by maintaining a peaceful and centered presence.

In the end, thirteen members of the interfaith circle were arrested with nineteen others as they engaged in nonviolent civil disobedience. Friar Louie, who turned 79 this past June and has been at this kind of work for five decades, was among the group. He and the others were held until late in the afternoon, when they were cited and ordered to appear in an Oakland courtroom on December 15 to face charges of loitering and failure to disperse. They returned to Oscar Grant Plaza and found a vibrant General Assembly hard at work. While the city was barring a new encampment, it did not prevent people from assembling there again. 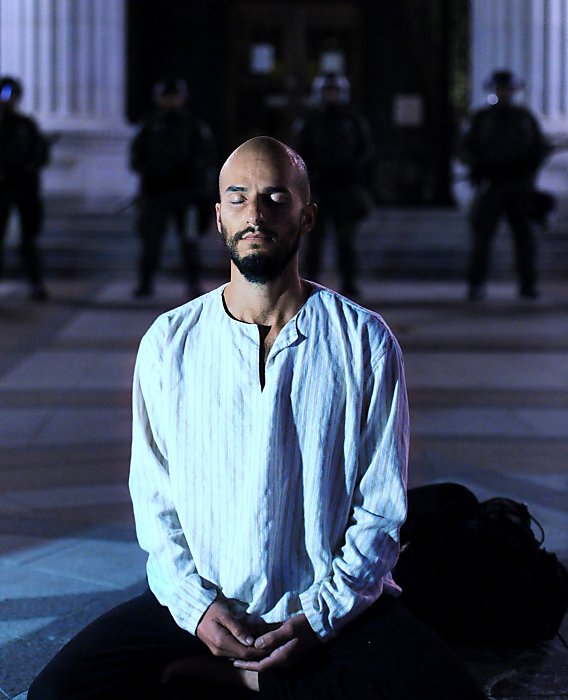 One person who will not be at the mid-December arraignment is Louie’s friend, Francisco “Pancho” Ramos Stierle, who was also arrested in the early morning raid and, as reported on this site, is facing possible deportation to Mexico. His arraignment was fast-tracked on Wednesday afternoon—the District Attorney declined to press criminal charges for his act of nonviolent civil disobedience—but as of now he is still behind bars because there is an Immigration and Customs Enforcement (ICE) hold on him.

Monday morning, Pancho was arrested while meditating. He has brought his soulful energy to numerous nonviolent protests and demonstrations. At the same time, he has also been actively engaged in building a more positive and constructive world. Erika Christie, one of Pancho’s friends, has circulated the following reflections that help shed light on the meaning of his nonviolent action and his path:

“My family calls me Pancho, and I would like you to know that I love you.”

That is how he might introduce himself if he were writing this himself. Pancho is currently being held in Santa Rita jail, the only one of those arrested on Monday morning who has not yet been released. We are asking anyone who believes that this movement can and should be a force for powerful, positive nonviolent change in the world to support his immediate release so that he can return to his life of service here in the Bay Area. His lawyer, Francisco Ugarte, released the following statement to a group of supporters and friends gathered outside the Alameda County courthouse yesterday afternoon:

“He wanted to convey a message to the protesters and occupy Wall Street movement that he is fine. And that he is willing to stay in jail as much as it takes to get the message across. He says the same day city of Oakland spent two million dollars trying to stop the Occupy Wall Street movement, is the same day that Oakland shutdown five schools. It is the same kind of stuff happening around the country. We don’t have an economic crisis, but a crisis of priorities. We don’t need to bail out the banks, we need to bail out the people. The other reason he is doing this is for spiritual people to become more active and for activists to become more spiritual, so that we can have a total revolution of human spirit. ”

Pancho is an astronomer—an astrobiologist, to be exact, whose astronomical perspective led him to become a Gandhian activist who sees the Earth as but one country and all the living beings its citizens. His activism spans issues of human rights, environmental sustainability, nonviolence, peace-building, immigration, urban agriculture and the development of a vibrant “gift economy.” He has been an integral part of movements to democratize the University of California system, protect old growth trees, implement “free farms” and move beyond youth violence, among other efforts.

Pancho has dedicated most of his considerable energy to what Gandhi called constructive program. Constructive Program is action taken within the community to build systems or resources that are positive alternatives to oppression. It is doing what one can to imaginatively and positively create justice within one’s own community.

For the past several years Pancho has lived almost entirely without money, forgoing an income and, at times, a roof over his head, in order to dedicate himself full time in service to this work. He has been growing healthy food in urban gardens and distributing it for free to those who need it (see freefarmstand.org), hosting and facilitating practice restorative circles (a method that allows communities to resolve their own conflicts before they erupt into violence), and worked at a nonviolence education center for three and a half years nearly full time on an entirely volunteer basis.

Pancho often says, quoting Gandhi, that this constructive work is 90% of what it takes to create social change. As he will often tell you, the other 10% of the energy it takes to transform a flawed system is directed toward withdrawing support from and actively non-cooperating with systems that perpetuate injustice. This work is commonly known by its various methods, such as protest, boycott, and civil disobedience. Gandhi also coined the term satyagraha which means “holding firmly to truth” for the personal act of engaging in such active resistance to injustice and taking the suffering released from the crumbling system onto oneself, to remain peaceful rather than retaliate in violence.

Satyagraha can be understood as the vast inner strength required to perform nonviolent acts. When understood for its strength and courage, Satyagraha—also defined as ‘soul force’—is recognized as a positive and spiritually-based form of resistance that starts in the heart of the resister and inevitably produces creative action.

Those of us who know and have worked with Pancho can tell you how much he embodies that soul force. He is a courageous and gentle human being who often defuses tense or violent situations with his peaceful presence. You can catch some sense of that in the photos taken on Monday morning as he was arrested for meditating during the police raid at Oscar Grant Plaza. Behind those photos, which have now gone around the world, is Pancho’s carefully considered decision to sit and meditate in the midst of a City’s raid on a peaceful, creative, evolving movement. Behind that decision is the context of a life lived in what he calls “radical joyous shared servanthood to unify humanity.”

Erika has also passed along a link to an illuminating essay that Pancho and others have collaborated on entitled “Earth Swaraj or The Independence of the Earth.”

I reached Louie Vitale tonight and told him about the ICE hold. He was in Birmingham, Alabama, where he was staying before going on to Fort Benning, Georgia for this weekend’s annual witness calling for the closure of the School of the Americas.

He was sorry to get this news, saying, “Pancho is exactly the kind of person we need in this country. He is generous and creative and totally committed. In fact, he exemplifies what the Occupation movement is all about at its core. For him, this action is not simply about changing his situation. He wants change for our entire society. He wants it to work for everyone.”

Existing and resisting in the nuclear submarine capital of the world

How relatives of Chile’s disappeared are exposing dictatorship-era torturers