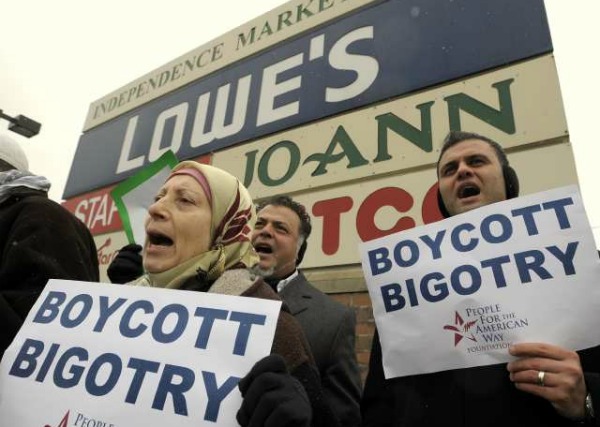 Last month, TLC debuted a new reality show called All-American Muslim that follows the daily lives of five families in Dearborn, Michigan–home to the largest mosque in the United States. According to the show’s website, “Each episode offers an intimate look at the customs and celebrations, misconceptions and conflicts these families face outside and within their own community.”

Within weeks of its premiere, TLC got a taste for itself of such misconceptions and conflicts, as a right-wing attack, led by a Christian group in Florida, pressured 65 of the 67 companies they targeted to pull ads from the show. One of these companies is the home-improvement giant Lowe’s, which is now being petitioned by a coalition of activist and faith-based groups–including Faithful America, Change.org, CREDO, Sum of Us and Groundswell–to apologize and reinstate advertisements. The national chain has also been facing the prospect of store protests and a boycott.

Yet Lowe’s seems unswayed. After a meeting today with a group of interfaith clergy–who hand-delivered more than 200,000 petition signatures to the company’s headquarters in Mooresville, North Carolina–Lowe’s stated that the decision to pull its ads was internally-based and not influenced by the Christian group. “We have a strong commitment to diversity and inclusion,” the company maintained, adding, “and we’re proud of that longstanding commitment.”

While the future of the show remains uncertain, cast members have spoken up about the controversy to say how much it has actually helped their community. In a Youtube video posted by USA Today, Nawal Aoude says, “Honestly, I just want to thank this Florida Family Association for doing this because I think what they were trying to do has totally backfired big-time.”