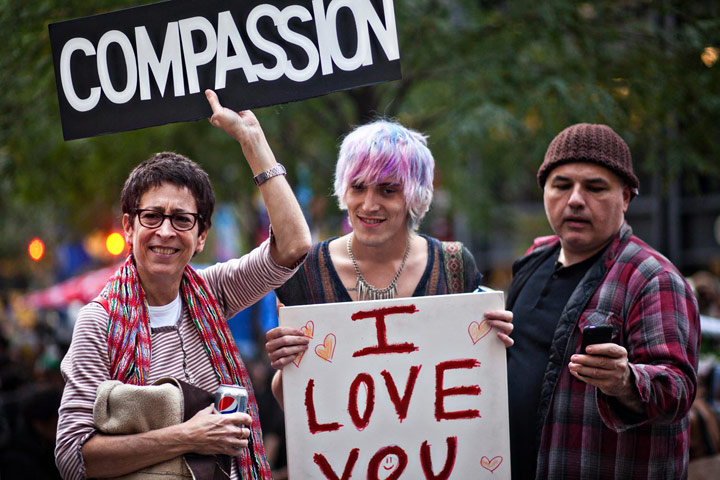 As an activist for over seven years, I have witnessed numerous progressive organizations—even entire movements—fall apart due to internal conflict. Many blame this phenomenon on government infiltrators, which undoubtedly have played a role in sowing discontent and provoking violence within our ranks, but the presence of infiltrators alone cannot account for the general divisiveness that even the thoroughly inclusive Occupy movement has fallen prey to in its weaker moments.

Those in need of an example can look no further than what occurred in Oakland during the epic port shutdown last month. Conflict between Black Bloc anarchists and nonviolent activists propagated an easily exploitable rift in the movement during what should have been its finest hour.

A major contributor to this divisiveness that is far less obvious than the age-old battle of nonviolence vs. “diversity of tactics” has been the tendency of radicals to incessantly highlight the many transgressions of the government, its corporate masters, and other upholders of the status quo while focusing on solutions only as an afterthought. I will not repeat this tendency here as my whole purpose for writing this is to propose a solution to internal conflict within the Occupy movement, and I do not wish to be ironic. I will, however, add that it is inherently difficult for those who identify as the oppressed/victims (in this case the Occupiers) of a given situation to come up with a solution to their own plight. Calling oneself oppressed implies that the oppressors owe some type of concession—which they certainly do—but there is a problem: If the basis for one’s satisfaction lies in the hands of a party that one has no control over, what can be done if said party refuses to relent? This is where the true conflict begins and it extends to internal struggles as well.

My antidote is simple: We must acknowledge that not every struggle is an outward one and that we bear some responsibility both as a movement and as individuals for our shortcomings. My hope is that such an acknowledgement will be the first step toward building our own justice/accountability process with the aim of strengthening the movement by approaching conflict as an opportunity for individual and collective growth/transformation rather than as a menace to be avoided. It’s not as if we would readily trust the police and the courts to judge our own, so why not take up the gavel ourselves? Of course, I do not mean that we need our own court system and police force; we should instead use our Occupations as laboratories for community-based restorative justice.

The experiment has already begun. Several teach-ins and workshops on restorative justice and related subjects have taken place at Occupy D.C., Occupy Wall Street, and elsewhere—with plenty more likely to follow. (I should note for the sake of full disclosure that I co-organized one teach-in and plan to continue). Many Occupations have also formed Safe Spaces committees and agreements geared toward maintaining an inclusive and secure environment for the vulnerable populations that are present.

Given the ubiquitous nature of the movement and its pre-existing focus on consensus, it seems to me that it is only a matter of time before the Occupy movement becomes synonymous with restorative justice. Many of us may want to see Wall Street bankers and crooked corporate CEOs behind bars, but this should not deter us from building a true alternative to costly prisons and archaic retribution within the tent camps in which we reside—if only to help us better combat the system that treats us so unjustly.

Matt Johnson is a writer, educator, facilitator, and social justice activist in Washington, D.C. He currently volunteers for the Conflict Resolution Center of Montgomery County, a small nonprofit that provides mediation, facilitation, and community conferencing, and Transformative D.C., a grassroots initiative that works to address interpersonal violence and harassment within the activist community.

‘A Vision for Black Lives’ is a vision for everyone