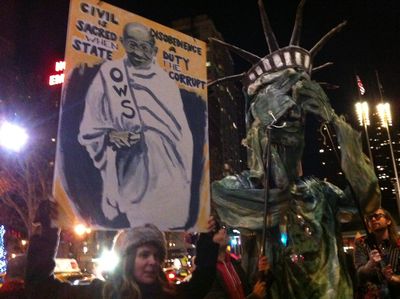 On Saturday night at the Metropolitan Opera in New York, just before the third act of Faust began, a man began yelling from the audience, “Occupy Wall Street! Occupy Wall Street!” It had neither the rhythm of a chant nor the participatory quality of the usual “mic check” that has been used to disrupt so much lately, interrupting public figures including Michele Bachmann, Scott Walker, and Barack Obama. (Maybe having the quorum for a mic check would have cost too many tickets.) It was first received with a boo from someone on the opposite side of the theater, but that was quickly drowned out by a round of applause—something like what a singer might receive at curtain call for a decent performance in a supporting role. The protester was carried away by the NYPD.

Presumably this comes as part of Occupy Lincoln Center, which on December 1 held a protest attended by Philip Glass, Lou Reed, and Laurie Anderson. That night, the Met performed Glass’s opera about Gandhi, Satyagraha. One sign read, according to the LA Times, “Gandhi would be pepper sprayed.” Like the other Occupy actions under the umbrella of Occupy Museums, these protests oppose “cultural institutions that serve the nation’s wealthiest citizens at the expense of the vast majority.” (It doesn’t help that people aren’t being allowed to protest on Lincoln Center’s plaza—apparently, it’s Koch-Blocked. Or that Mayor Michael Bloomberg’s media is one of Lincoln Center’s chief funders.)

We believe that institutions promoting a cult of celebrity, unfair labor practices, extreme commodification of art, and which trivialize or glamorize political struggle and protest are only the logical outcome of an entire culture stolen from the people by the 1%. We point to the visual promotion of corporate or private sponsorship seemingly without limit—as if this small group, not the public, truly own our cultural commons.

Some people at the December 1 protest reportedly complained about the high ticket prices at the opera; to that, Seth Colter Wells at The Awl responds well:

[A]t the Met, the most expensive opera tickets are indeed expensive, but you can stand behind the orchestra section—or even sit at the upper reaches of the house—for less than the cost of an IMAX showing at the AMC Loews Lincoln Square 13 multiplex up the road. This persistent fiction of “elitism,” and contemporary classical music’s supposed inaccessibility, is one of the strongest propagandistic tools ever devised by the titans of corporate pop culture. They would prefer you not ever cost-compare a Family Circle seat to Satyagraha alongisde a 3D screening of Transformers 3. … [W]e can take a page from Adbusters‘ “every dollar spent is a vote” ethos and decide what do with the $20 bills that we do control.

It’s also worth mentioning the $20-25 rush tickets for orchestra seats, or the Met’s “Live in HD” program. Still, those programs depend heavily on 1-percenter donors, so point taken: there needs to be more public support for the arts.

There’s a better point these protests call us to consider, though: are we really listening to the operas themselves?

Both Satyagraha and Faust carry quite radical messages. Glass’ work confronts us with the politics and spirituality of Gandhi’s life. When this production of Satyagraha first came to New York in 2008, as I wrote back then, the Met even put on a publicity blitz with messages on posters like “Could an opera make us stand up for truth?” and “Could an opera make us warriors for peace?” Reasonable questions. As usual, though, audiences attended, reviews came and went, life went on. It was just marketing, after all.

The new production of Faust—an opera composed in mid-19th century France—has a polemic of its own. Director Des McAnuff sets it during World War II, with Faust as a nuclear scientist. Fat Man and Little Boy, the bombs that would fall on Japan, dangle overhead behind him. It’s a conceit that works remarkably well with the libretto and is remarkably damning—literally, to hell—for a country that for more than a half century has built its quest for global dominance on possessing enough nuclear weapons to bring about the end of the world at will. (The Met has previously taken on similar issues with performances of John Adams’ Doctor Atomic.)

Why, then, are these operas not treated as revolutionary? Why are they not causing their establishmentarian funders to stand up (“for truth”), leave, and take their money with them? Probably the simplest answer is that the productions enjoy the benefit of what’s now quite distant hindsight: it’s easy enough to pretend that the empire Gandhi opposed and the Promethean dawn of the nuclear age are past. Of course they’re not. But they’ve now taken ostensibly different forms, which somehow makes it conveniently optional to translate these operas’ implications to the circumstances of the present.

The Occupy presence, for all its rough edges, might at least lend the performances of works such as these the urgency they deserve. This is not polite social commentary, the protesters say—this is a crisis. This is our crisis. Listen harder.

Acting locally and globally at the People’s Climate March