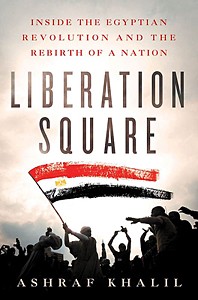 As we approach the first anniversary of the Egyptian revolution on January 25, a lot of us could stand to refresh our memories of just what happened. Maybe, while being under our various rocks, we even missed some of it the first time around. That’s why I was grateful to come across Ashraf Khalil’s Liberation Square, hot off of St. Martin’s Press. The book makes the revolution about as exciting as one would think a revolution should be, and perhaps almost as much as this one actually was. Pick it up, and you’ll find yourself engrossed in “movement time”—which is to say, regular time seems to go on hold until you’re done. But the book also inadvertently serves as a reminder that, in such “movement time” euphoria, even a person apparently right in the middle of it all might not quite understand what’s going on.

The initial chapters acquaint the outsiders among us with a gist of what it’s like to be an urban, educated and hopeless young Egyptian in the early 21st century. It doesn’t sound very appealing. Indeed, Khalil’s chief explanation for what drove so many young males over the edge was the pent-up anxiety that they’d never get to have sex; low job prospects meant low prospects of leaving their parents’ houses and low prospects of getting married. Fair enough. To an ignorant reader like myself, Khalil gives the impression that he has spent enough time haunting Cairo’s cafes to have quite fully plumbed the souls of this restive demographic. Which is illuminating. But sexual frustration alone does not make a revolution.

As he brings us up to January 25, Khalil makes some seemingly dutiful nods to the April 6 movement and Kefaya, the youth organizations that ultimately provided the framework for what would follow. He does helpfully describe scenes from much smaller, earlier protests, which the author seems to have made a habit of attending, and at which he became accustomed to tear gas. But the narrative mainly sticks to general cultural trends, especially the lightning rods around which public opinion rallied: Khaled Saieed, the young man brutally murdered by police outside an Internet cafe, and Mohammed ElBaradei, pre-revolutionary Egypt’s possible messiah. Much is said about the club of international reporters who hang around Cairo, which sometimes affords a perceptive look at the manufacture of media. There are few glimpses, however, into how the marvelous energy conjured in public opinion was actually marshaled by determined organizers into what would become a highly effective movement.

For the bulk of the book, Khalil plays the war correspondent, reporting from the front lines where protesters battled with police, venting their rage from years on end of abuse. (It’s a useful reminder, for all those who complain about the evolving messaging of other movements, that the revolution which eventually called for Hosni Mubarak’s departure began as a protest against police brutality.) He gives little credence to the conventional wisdom—which we at Waging Nonviolence have been eager to uphold, of course—that this revolution was a nonviolent one. We follow him through scene after scene of carnage. There are detailed accounts of crowds moving through the streets of Cairo, outmaneuvering and beating back police and other Mubarak goons. Almost absent, though, are the images we saw constantly during those days of a spirit of nonviolence infusing the life of those in Tahrir—unarmed people crowded around military tanks, showing their power not by threatening harm but through the utopian encampment they created there.

The endgame, from Khalil’s vantage point on the streets of Cairo, is almost entirely mysterious: “a coup.” That’s about it. We watch among the protesting hordes as Mubarak comes on TV promising to be good, after which the hordes throw their shoes. What we don’t see are the coordinated labor strikes that were taking place around the country, threatening to further debilitate its economy; we don’t gain any new insight into the almost certainly crucial role of the United States in the Egyptian generals’ decision to depose their longtime patron; nor do we, therefore, really understand why exactly the thousands upon thousands of people who wouldn’t leave Tahrir Square were able to change at least part of the structure of power in their society.

This is fine, I suppose. Khalil tells a good story, and I enjoyed reading it. But he doesn’t really capture or explain what moved the Egyptian people from simple frustration to the competence and capacity to build a movement capable of actually expelling a dictator, or how that movement finally proved decisive. What we have instead is a sometimes thrilling account of what it is like to be a relatively well informed participant-observer on the ground during an important protest. This book reveals one part of what exploded onto the streets of Egypt last year on January 25, but it shouldn’t be mistaken for the whole.

From Assad to ISIS, a tale of Syrian resistance

A few weeks in the streets