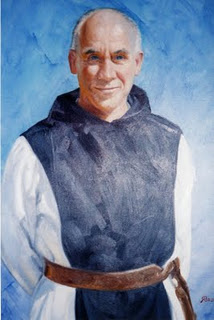 Fifty years ago Thomas Merton was doing everything in his power to sound the alarm about the peril of nuclear apocalypse.

Merton, a Catholic monk best known at the time for his many books of contemplative spirituality, poetry, and compelling autobiographical reflection, had suddenly taken the full measure of the atomic threat in 1961. Between October 1961 and October 1962 he penned a flurry of letters to friends, activists, artists, and intellectuals vigorously and prophetically urging a new way forward. These 111 “Cold War Letters”—supported by numerous essays and poems he also produced at the time on this subject—were part of an effort by Merton to create (as theologian and activist James W. Douglass put it in the foreword to this collection that was finally published in 2006) “a spiritual chain reaction counter to the Bomb.”

With Merton’s birthday approaching (had he lived, he would have turned 97 next Tuesday, January 31), it seems an appropriate time to remember—but also to learn from—this pilgrim for peace and how he “waged nonviolence.”

At the far end of the 1950s, Merton began to reframe his understanding of his identity and vocation as a monk. Casting off an earlier separation from humanity that he had avidly and pietistically embraced when he entered the Abbey of Gethsemani south of Louisville, Kentucky in 1941, he came to see that, not only was he part of the world, he was called to love it. This stance did not mean, though, uncritically accepting the world as it is. Indeed, it meant prophetically challenging systems and patterns of violence and injustice that prevent the fullness of love from flourishing. Part of loving the world included critiquing it.

This took many forms. He wrote a series of books and articles against war, beginning with an essay published in The Catholic Worker newspaper entitled, “The Roots of War.” He wrote widely against racism and in support of the Civil Rights movement. He published a book on Gandhi, and supported and endorsed numerous peace initiatives, including the Catholic Peace Fellowship and the Fellowship of Reconciliation.

He, like many other advocates for peace and justice before and since, was also being tracked by the government. Several years ago I received a copy of files kept on Merton, which had been obtained by a Freedom of Information Act request made by Robert G. Grip, a reporter at a television station in Mobile, Alabama. The collection of documents that was declassified and released is slim but illustrative:

The United States federal agencies queried were the Central Intelligence Agency (CIA), the Federal Bureau of Investigation’s (FBI) main headquarters and Louisville office, and the U.S. State Department’s offices of Passport Services and the Central Foreign Policy Records. The request yielded a letter intercepted by the CIA from Merton to [Nobel laureate] Boris Pasternak in 1958 while covertly monitoring letters between the United States and the Soviet Union… The FBI offices revealed information kept on Merton in regards to his involvement with the peace movement (mainly the Catholic Peace Fellowship) and in helping conscientious objector Joseph T. Mulloy.

In support of Mulloy’s application for CO status, Merton wrote a letter dated February 19, 1968 (at the height of the Vietnam War) to Local Draft Board 47 in Louisville, Kentucky, which found its way into the file:

As spiritual advisor, I have been consulted by Joseph Mulloy, who is seeking to follow his conscience in opposition to war. I believe he has every right to do so & also believe that his rights are being denied him. Consequently, doing my simple duty as a priest, I have given him encouragement & support in his fight for his right. I would like to make clear that such support is a religious matter and is not to be construed as an illegal act, nor is it political. It is essential for the preservation of American democratic values that the rights of conscience be respected even, indeed especially, in matters involving violence and war.

This activity probably prompted one of the more intriguing pages in the file. A May 1968 document from the Kentucky State Un-American Activities Committee argues that “a closer look should be taken at the questionable activity within the Roman Catholic Church of Louisville and Kentucky,” based on some “findings” passed along by a group named Catholic Concerned Citizens. Most of the document is blacked out (apparently to protect the privacy of those named), but at the top of the list there is a paragraph on Merton, which concludes “he is of an undesirable element and should be considered the #1 target of your committee.”

Many things likely motivated such vitriol, but, coming just a couple of months after the anti-draft demonstration, it probably is rooted in the conviction that religion and politics don’t mix, especially politics of the progressive variety. But, as Merton indicates in his letter supporting Mulloy, he sees the matter differently. Not so much that religion and politics “mix” as there is a deeper unity they share. This is rooted in one of Merton’s fundamental spiritual tenets, articulated in his prose-poem “Hagia Sophia”:

There is in all visible things an invisible fecundity, a dimmed light, a meek namelessness, a hidden wholeness. This mysterious Unity and Integrity is Wisdom, the Mother of all, Natura naturans. There is in all things an inexhaustible sweetness and purity, a silence that is a fount of action and joy. It rises up in wordless gentleness and flows out to me from the unseen roots of all created being, welcoming me tenderly, saluting me with indescribable humility. This is at once my own being, my own nature, and the Gift of my Creator’s Thought and Art within me, speaking as Hagia Sophia, speaking as my sister, Wisdom.

The profound indivisibility of reality calls us not only to become aware of the sacredness of every being but also to recognize that a step taken to heal the torn or frayed web of life is not primarily a political tactic but a deeply spiritual act.

As the 1960s progressed, Merton functioned as a spiritual advisor not simply to individuals like Joseph Mulloy but to a growing global network and even to peace and justice movements. (Many years ago, a theologian I met in graduate school told me that during the Civil Rights movement, which he actively participated in, he would occasionally take a long drive to Merton’s monastery. For a few hours, Merton would go AWOL and they would drive the back roads of the area and talk strategy and spirituality.)

But this unique form of spiritual direction (most of which we would call “distance learning” today, since he rarely left the monastery) grew out of his 1961 encounter with the horror of war and its preeminent modern symbol: nuclear weapons. He intuited the logic and trajectory of this latest, technologized version of the myth of redemptive violence. Hence he wrote his Cold War Letters, which Douglass called “a form of praying in the darkness, a search for light with the companions he addressed, a night of the spirit when everything seemed lost.” Douglass frames the crisis Merton was wrestling with:

As he wrote these letters…in the year leading up to the Cuban Missile Crisis, Merton saw clearly what was at stake in the Cold war. It was the survival of the human race—survival not only physically, from inconceivably destructive weapons, but also spiritually from the ways in which we made the weapons our gods and obeyed their commands….

In a letter to Archbishop T. D. Roberts in London, he feared the situation “amounts in reality to a moral collapse, in which the policy of the nation is more or less frankly oriented toward a war of extermination…step by step we come closer to it because the country commits itself more and more to policies which, but for a miracle, will make it inevitable.

And, as Douglass sketches in his foreword (and illuminates in stunning detail in his comprehensive book, JFK and the Unspeakable) the miracle briefly came to pass. President Kennedy rejected the Pentagon’s plan to launch nuclear war over Cuba and worked with his enemy, Nikita Khrushchev, to defuse the crisis. (Douglass’s book goes on to copiously document how this peacemaking between enemies continued, often in secret, with regard to Berlin, Indonesia, and the achievement of the Partial Nuclear Test Ban Treaty until Kennedy’s death.)

But Douglass does not leave it there. He draws the parallels between the crisis of the nuclear arms race of the 1960s and the current war on terror. Like Merton, we are faced today with a monumental crisis: endless war with physical and spiritual death and destruction for millions.

With the increasingly reckless saber-rattling concerning Iran of late, the horrific prospect of a new and even more lethal war has every chance of gaining virtually unstoppable momentum. And so we, like Merton, face a choice: More of the same or a “Great Turning”?

As Merton wrote in one of the Cold War Letters to activist Jim Forest: “Really we have to pray for a total and profound change in the mentality of the whole world.” At this late hour, we are each called to this “total and profound change”—which, like Hagia Sophia/Holy Wisdom, discerns the “hidden wholeness” by which we are all connected—and, in turn, called to put this transformation into concrete, visible and profoundly nonviolent action.

Happy birthday, Tom. Thank you for your life and your enduring light.

Thomas Merton, now more than ever