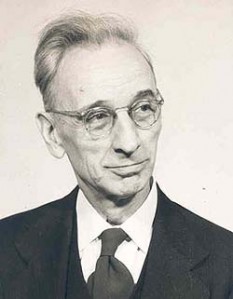 “Joy and growth come from following our deepest impulses, however foolish they may seem to some, or dangerous, and even though the apparent outcome may be defeat.” – A.J. Muste, dubbed “Number One U.S. Pacifist” by Time Magazine in 1939

It seems apocryphal. An old man well-dressed and undoubtedly erect and respectable, a raging war in a distant land, a relentless rainstorm that made the peace vigil a solitary witness, and an inquiring journalist ready with question, pen and pad: “Mr. Muste, do you really think you can change the world standing here alone in the rain?” (or something to that effect). And the quick and unforgettable reply: “I am not here to change the world; I am here so the world won’t change me.”

Ahhh. Wow. It is an exchange upon which I often meditate.

The world: our consumer culture, the 24-hour “news” cycle, racism, sexism, xenophobia, the cult of war… all these forces and more conspire to change us, to strip us of our humanity and our innate compunction to reach out to neighbor and make the world better. All these forces would like to see us cynical, fearful and compliant. Abraham Johannes Muste does not have to say all that. He just simply uttered a few words and we know all the rest.

I never met the man. He died 45 years ago this month (February 11th to be exact). But from stories and the recollections of others, he seems some sort of pacifist knight. He was born in Holland and came to the United States when he was a small boy. His family settled in Grand Rapids, Michigan. From there he went on to study theology and eventually became a minister with a church in New York City, married Anna Huizenga and had three children.

According to Jo Ann Robinson, author of Abraham Went Out: A Biography of A.J. Muste, he looked at the world as it was and could not ignore it. He became preoccupied with “how to apply Christian precepts to political corruption and class conflict in America” and that was added to a “new struggle over how to come to terms with massive suffering and dying caused by the Great War.” In a series of essays for Liberation Magazine, Muste wrote:

I had to face—not academically but existentially, as it were—the question of whether I could reconcile what I had been preaching out of the Gospel and passages like 1 Corinthians, 13, from the Epistles, with participation in war.

For those of you who don’t have a searchable Bible in your head, that passage is often read at weddings: love is patient, love is kind… love never fails. But it goes on to say that while there are prophesies and knowledge, they do not last and concludes by asserting, “And now these three remain: faith, hope and love. But the greatest of these is love.”

These ponderings made Muste change; he grew more and more interested in the faith and practice of the Quakers, and eventually became a Friend. After that giant step, Muste was involved in many peace and justice struggles. He counseled men seeking conscientious objector status during World War I; he worked with striking workers in the textile mills of Lawrence, Massachusetts and then came to work for the Fellowship of Reconciliation. From that post, Muste helped to bring a deeply religious but ecumenical flavor to ongoing work for peace and justice—from war tax resistance and anti-nuclear organizing to the civil rights movement and the anti-war movement. These few sentences can hardly do justice to a life so fully lived, but besides the books already mentioned, there are numerous biographical articles online—here, here and here are a good start.

Jo Ann Robinson sums up this unsummable man like this:

A. J. Muste became “Number One U.S. Pacifist” by virtue of his keen insight into the nature of violence and his unquenchable faith in the power of love. His reputation for political acuity and non-conformist activism revolved around his insight. But the prime and sustaining factor was his faith. It lent his political predictions the power of prophetic warning, enriched his pragmatic analyses of society with timeless wisdom about the human condition, and transformed bold confrontations with the state into “holy disobedience.”

I say, let’s learn more about this man, especially now that there is this new wave of activism and outrage and radicalism springing forth in the United States through “Occupy” and other fronts. I think it all needs a little Muste flavor.

February is a tough month, still very much winter but holding the promise of spring in the offing. It contains a strange collection of holidays and remembrances: Black History Month, so often scattershot and condescending; Valentine’s Day, the international flower, diamond and candy cartel’s brilliant invention; and of course President’s Day, now the official realm of shrill hawkers of furniture and cars wearing tall beaver hats or powdered wigs. A.J. Muste died on February 11, 1967 at the age of 82. Perhaps we can inaugurate a new holiday in the shortest of months—A.J. Muste Day.