Debuting at yesterday’s “Shut Down the Corporations” action, the + Brigades is a new and growing part of Occupy Wall Street intent on supplementing upcoming protest actions with life-affirming energy, color, dance, song and costumes. A squad of dancing clowns led a rainy day of protest in Midtown Manhattan, targeting the offices of Bank of America, Pfizer and Koch Industries.

At the initial + Brigades meeting a couple weeks ago, there were cross-dressing, rollicking games, buffoonery, strategizing and one thoroughly orange man. Andy Bichlbaum of The Yes Men presented a slide show that had the 40 of us transfixed with images of Civil Rights marchers, Chilean students paint-bombing police and Abbie Hoffman pretending to burn a puppy in a bid to set America’s wartime conscience alight. Occupy organizers cheered as images of themselves appeared among those of others. Afterwards, the brainstorming began about how to drastically expand the movement’s repertoire in the streets.

The meeting raised questions for me about what happens when people working toward changing their society tell stories about the past. What role, I began to wonder, does the creative interweaving of past and present play in supporting radical thought?  The history of West Central Africa’s Antonian movement, active mainly between 1704 and 1706, suggests that what historian Peter Burke has called “social memory” might be an especially valuable supplement for people resisting oppression and also seeking strength and inspiration.

The Antonian movement, like Occupy Wall Street, fought against unchecked greed—to limit the power of self-serving local elites, to end two generations of civil war and to deal with the problem of displaced people exiled from their homes. Affiliates briefly occupied the abandoned capital of San Salvador (Mbanza Kongo), which was a place of great symbolic importance. San Salvador had been the center of the once prosperous and stable Kongo Kingdom. After claiming that legendary spot, the Antonians dispatched messengers to enlist more people into the movement.

Their leader was a young woman named Dona Beatriz Kimpa Vita, trained as a nganga marinda—a healer and a medium. Beatriz had already had several visions when she became seriously ill in 1704. When she recovered, this bearded woman claimed to be possessed by the spirit of Saint Anthony. As his medium, she declared that Jesus was Kongolese and that Mary had been born a slave into a noble Kongolese family. (Kongo’s rulers, noble families and Kikongo-speaking commoners had practiced a syncretic Catholicism for over two hundred years, starting with the king’s baptism in 1491, which followed the arrival of the Portuguese at the mouth of the Congo River in 1483.)

Beatriz’s tactics were diverse but comprehensible to ordinary Kikongo speakers accustomed to asking advice of healers when facing grave personal and social afflictions. Beatriz’s anti-war movement involved purification, predictions about the obliteration of whole communities on a designated day and promises that she could cure sexual infertility. Although she came from a relatively wealthy home, her followers were poor people impoverished by the demands of the nobility, who pressured them to fund their wars. The youth flocked to her. Her “Little Anthonies” told people to abandon baptism and not to carry crosses. She instructed supporters to carry cast-metal statues of Saint Anthony instead. Beatriz also burned the cross, calling it the “instrument of Christ’s death.” Unlike the healers who worked for pay, though, she healed for the common good. And, as the avatar of Saint Anthony, Beatriz called on warring rulers to let Saint Anthony decide who should govern. Like those who took hold of Zuccotti Park last September, the Antonians accused the very wealthy of failing to uphold their end of the bargain—namely sharing their polity’s wealth and behaving honorably. 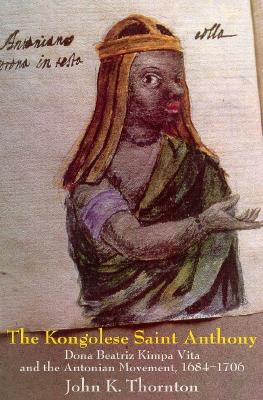 The fullest account of Beatriz’s life can be found in John K. Thornton’s The Kongolese Saint Anthony: Dona Kimpa Vita and the Antonian Movement, 1684-1706. Using dairies of Italian Capuchin monks, oral accounts of Kongolese history compiled by a French missionary and the insights of anthropologists, Thornton shows that Kongolese people developed interpretations of Christian liturgy that emphasized intentions over deeds and motives over behaviors. Put differently, the Antonian movement linked social evolution and self-evolution.

Beatriz’s movement ended—or so it seemed—when she was burned at the stake as a heretic in 1706 and many of her followers were captured and shipped across the Atlantic as slaves. Yet it had unpredictable aftereffects. Primary forms of resistance planted the seeds of secondary forms of resistance. During moments of political ferment, people who channel memories of distant ancestors or restate the teachings of newfound heroes, engage in what might look like acts of individual valor but are also acts of creative reconstruction which can tap into deep wells of meaning.

It is possible that the same ideas that animated the Antonian movement in the Kongo fired the imaginations of the group of 20 Kikongo speakers who gathered near the Stono River in South Carolina in 1739 and quickly assembled a hundred-strong posse. During the Stono Rebellion, Kongolese Catholics killed slave owners and burned farms, while sparing the life of one master with a reputation for kind treatment. Historians do not know for certain, but it seems likely that they sang songs reminiscent of Beatriz’s interpretation of the Salve Regina prayer.

The past more visibly supplemented the present in Saint Domingue in 1791, when Kikongo-speaking field hands assembled into a Kongolese “nation” and participated in the Haitian Revolution. Unlike that two-tiered revolution’s leaders, they fought for what we would today call structural change. They hoped for the creation of an equitable, village-like society, as opposed to merely replacing a white planter class with a black and mixed-race planter class.  We know that they sang about protection, deliverance and salvation using the word “kanga,” a key term for the Antonians, which spoke to their belief that their intentions would ensure their salvation and protection.

How does this relate to Occupy Wall Street? Today, organizers, strategists and activists are also assembling a mixed pastiche. The + Brigades, Occupy Faith, the Messaging Cluster and many other groups in the movement are consciously and unconsciously reworking words, images, gestures, melodies, ideas, stories and symbols pulled from the eddies of memory. What was before safely lodged in family stories and organizational legacies now bobs along in fast-moving discussions, drafts, proposals and practices. Today’s radicals are borrowing materials from the past in order make apparent to others and themselves the underlying causes of poverty, violence and corruption. Like the Antonians, who held up the ideal of harmony and reconciliation as an alternative to avarice and witchcraft, Occupy Wall Street is working to draw a cohesive constellation between the problems of various communities and the evils of a society in which personal greed is allowed to trump the duty of all people to act responsibly to each other.

Should the + Brigades include a +Archives Brigade or a +History Brigade? That might miss the point: we are already memory-makers—and never more so than in a moment like this one in which people are refusing to accept the present, fashioning heterogeneous memorials to the past and gathering into groups with the capacity to articulate bold expectations of the future. The past now supplements the present as people compose new songs about freedom, justice and human rights. If Occupy Wall Street “shall overcome,” it will partly be because the past still rises up within the present.

Occupy protesters look to the past with ‘+ Brigades’