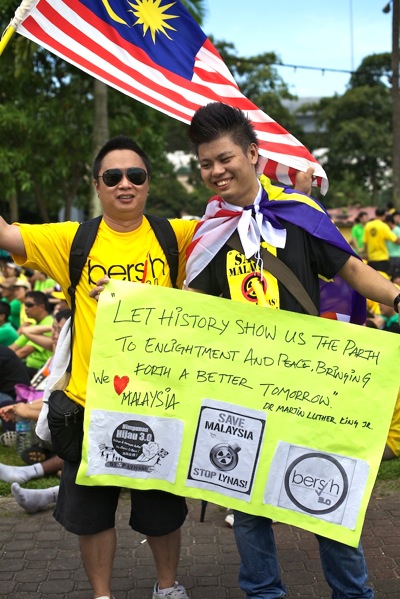 Following the huge turnout of Bersih 2.0 in 2011, Bersih 3.0 returned on April 28 with renewed vigour and determination to make the voices of Malaysians heard. Meaning ‘clean’ in Malay, Bersih calls for clean and fair elections in a country fed up with problems of electoral fraud, phantom voters, vote-buying and a lack of independent public institutions. Following recent amendments to the Election Offenses Bill that have led to the removal of election monitors, Bersih 3.0 was seen as an opportunity to make the unhappiness of Malaysians known to their government and the international community.

In Singapore, most public assemblies require permits from the police. Cause-related activities involving foreigners are rarely — if ever — allowed. Last year’s gathering of Malaysians at Hong Lim Park resulted in an organizer being called in for questioning by the police, and so it was no surprise when the permit for a gathering this year was rejected.

Bersih 3.0 Singapore therefore organized for Malaysians in Singapore (referred to as MiS) to meet up and travel across the Causeway to Johor Bahru, the closest Malaysian city. Organizers said that over 150 people made the trip.

Once in Johor Bahru, they assembled at Waterfront City for a photo session with Singapore’s skyline in the background — the closest they could get to Singapore without being arrested. The group also sang their national anthem, “Negaraku,” before heading towards Dataran Bandaraya to join their fellow Malaysians for Bersih 3.0 in Johor Bahru.

“Turning up today … is such a small thing to do, but it means something,” Johanna Lau, a student at the National University of Singapore, who is originally from Penang, told me as she followed the long line of yellow-clad protesters. Cars zipped by as we trudged along the road under the merciless sun. Many honked their horns, shouted their encouragement through open windows and gave a thumbs-up in support.

With the main part of Dataran Bandaraya occupied by a rock concert and the field taken up by a football match, Bersih 3.0 was relegated to a corner of the square right under the clock tower. Some suspected that both the match and the concert had been hastily organized to prevent protesters from being able to take over the whole space, but Bersih organizers and volunteers made sure that no one intruded upon the other activities.

Tan Tack Poh, a volunteer wearing a black T-shirt with “SECURITY” printed on the front, explained his role to me. “I’m here to make sure that no one messes with anybody,” he said. “We watch out for people. We have to be prepared in case there are thugs or troublemakers trying to stir things up.”

In addition to Bersih’s volunteers, local police also made their presence felt in the square but made no move to stop or obstruct any of the proceedings. During their speeches, leaders indicated that the rally had no intention of breaching the newly-enforced Peaceful Assembly Act, which prohibits “assemblies in motion.” In keeping with Bersih 3.0’s call of “Duduk Bantah,” or sit-in protest, people sat on the grass, shielding themselves with multi-colored umbrellas.

Over the course of the afternoon, the space was flooded by a sea of yellow. Flecks of green — representative of protesters against Australian rare earth plant Lynas — were seen amongst the crowd, and welcomed. “We want a clean Malaysia. Clean elections and clean environment,” said a protester who noticed me reading his “Stop Lynas!” sign.

“All we want is free and fair elections. The government media doesn’t tell us the full story, but alternative media spells out cases of fraudulent activity during voting. The government just gives us excuses,” said volunteer Munikrishan s/o Ponnan. “The people are serious about reform. We don’t want words, we want action.” His colleague Murugan s/o A. Kaliappan agreed: “This is for the good of our country. We’re here for our children’s future.”

At the designated end-time of 4 p.m., everyone got to their feet to sing the national anthem once more, then dispersed, thanking the volunteers and policemen as they left the square.

It was estimated that 4,000 people had turned up at Dataran Bandaraya in peaceful protest, a far cry from how things eventually unfolded in the capital city of Kuala Lumpur, where the main Bersih protest saw at least 25,000 people swarming the streets.

After the sit-in was declared a success and the crowds were asked by Bersih co-chairperson Ambiga Sreenevasan to disperse, a group of protesters broke through the barricades, preventing people from entering Kuala Lumpur’s Dataran Merdeka. Police retaliated by using water cannons and tear gas on everyone, and mayhem erupted in the capital. A police car crashed into the side of a building after being attacked by protesters, hitting two people. Hundreds were arrested and many journalists were manhandled, their cameras smashed and memory cards confiscated.

The violent way in which Bersih 3.0 in Kuala Lumpur eventually ended led Malaysian Prime Minister Najib Tun Razak to characterize the protest as an attempt by opposition parties to make the government look bad in the international community.

Yet, in most other parts of Malaysia and around the world, Bersih 3.0 was like what I observed in Johor Bahru: a peaceful gathering of Malaysians seeking to change systems they deem corrupt.

Victory on the front lines of the war against surveillance

What does it take to organize a workplace?

Happy birthday, Chelsea Manning! Thank you for the torture report