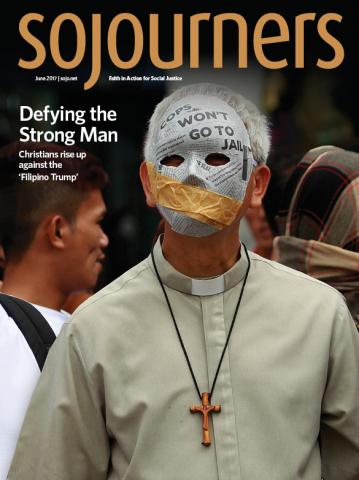 At the beginning of the year, I traveled to the Philippines to report on how people of faith are mobilizing against their authoritarian president, Rodrigo Duterte. Since coming to power last summer, he has launched a brutal campaign to root out corruption and drugs in the country that has left more than 8,000 people dead.

While the international media has largely focused on the horrific toll that this new war has taken, particularly on the urban poor, little context has been given for why Duterte remains so popular. There has also been almost no coverage of how ordinary Filipinos are organizing under these difficult circumstances, which leaves the impression that there is no real opposition of note.

In my new cover story for Sojourners, I offer some basic context for Duterte’s continued appeal, show his similarities and differences to Trump, and highlight a few of the courageous groups working to end the drug war and push for social, economic and environmental justice in the Philippines. They also published an interview I conducted with Fr. Ben Alforque, who is the convener of Rise Up for Life and for Rights, the leading ecumenical network organizing to stop the killings.

The full story will only be available online for free for another three days, so check it out while you can. After May 14, you can pick up a physical copy — which should include some of my photography as an extra incentive — at your nearest bookstore.

Since I finished reporting the story, there have been a couple important developments worth mentioning. First, while the drug war continues, the number of people killed has slowed from around a thousand each month over the first seven months, to less than 100 per month since March.

And just this week, Regina Lopez was removed as the head of the Department of Environment and Natural Resources by the Commission on Appointments, which critics argue was done in response to pressure from the mining industry. After this news broke, civil society and environmental groups held a candlelight vigil at the department’s central office, while activists with Greenpeace, including Yeb Saño, blockaded the main gate for more than 12 hours.

“Her appointment inspired us last year: her rejection today inflamed us to do more,” Saño writes. “The greed of the powerful few has won this round, but we consider this a temporary setback. We at the environmental movement will carry on boldly, for our rights, our environment, and our future.”

The best way to fight Trump is to challenge his narrative