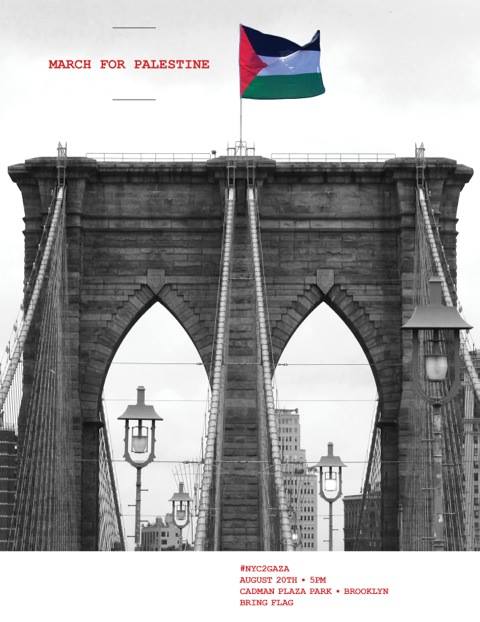 Amin Husain grew up in Palestine, just outside of Ramallah, and is a veteran Occupy organizer, activist, artist, writer and lawyer. Now, he is one of the key organizers behind #NYC2Gaza, an ad-hoc collective of activists in New York organizing solidarity actions for Palestine. On August 20, he and many others will be marching in solidarity with Gaza and occupied Palestine. I got a chance to catch up with him about the importance of continuous collective action and civil disobedience to end the Israeli occupation of Palestine and break the siege on Gaza.

To start with, tell me a little bit about #NYC2Gaza.

It is a loose group of individual organizers, activists and people that are moved by what is going on and recognized that there was a space. We had come together with a call to put out saying that this is a direct action front for Palestine.

Many of us knew each other from Occupy, so we wanted to create a hashtag that symbolizes what we think we’re trying to do, which is create that bridge between New York and Palestine, recognizing that this is the center of empire and the people here have a responsibility to escalate in ways that reflect how bad the situation has become in Palestine.

Recently there have been other Palestine solidarity activists that have questioned the need for civil disobedience if there is, in fact, a ceasefire brokered between Israel and Hamas. What do you think about this?

Of course it is still needed. The situation in Palestine is so dire; I think people are moved by the fact that they see these bodies on television and they see bombs falling, but the killing is happening on a daily basis because of the structural violence of the Israeli occupation, the apartheid-like regime and the siege that has been put on the people of Gaza for over seven years. There is no way for these people to rebuild. There are no medical supplies, there is no electricity, there is no water and there is a temporary ceasefire right now that is likely to fall through.

So, I think these calls to halt civil disobedience, even if they are well intentioned, are out of touch. It points to a bigger problem with the type of solidarity work and the challenges that we have to understand about this work. It does not begin and end with whether you see a bomb or not; it begins and ends with whether the occupation goes away or not.

Right now Israel‘s atrocities are all over the news, but it isn’t always like this. How can activists maintain pressure on Israel to end the occupation of Palestine and break the siege on Gaza when it isn’t necessarily in the headlines?

Number one, the issue of Palestine is something that relates to empire, and our struggles being connected. The NYPD has something to do with the Israeli occupation. The bombs that are being experimented with on the Palestinian people are part of an industry that we are promoting in our country. Our tax dollars are going over there.

Number two: part of the way you avoid actions starting and ending with whether or not there are bombs on television is if the person who is organizing is closer to the activity or not. It is very important for people who do solidarity work, for example, with Palestine to actually see and wonder and ask who is in the room with them. Are there any Palestinians? Are there any Muslims? Are there any people of color? Because the privileged white male position, although welcome, could be dominating and out of touch.

There has been a lot of talk lately about representations of Palestine and Palestinians in the media improving recently. Do you think this is the case? Do you think that it matters?

I think no one can deny that the front page of the New York Times featuring a picture that shows the humanity of Palestinians is significant. But the language and the ideology surrounding [media depictions] still hasn’t changed. Why do people talk about Hamas as if it is a terrorist organization, not a resistance organization? Why is the focus always on two parties in conflict — this sterilized way of thinking about things — when in fact there is an occupier and a people who are occupied, there is an oppressor and a people who are being oppressed. The voices that are always quoted tend to be the voices of those who are powerful. To me, that is what has not changed much.

But I think that there is also this media opening, and I think it is facilitated by social media. I think a lot of people have become this other kind of journalist which has allowed us to stay more informed than we normally would.

What are the connections between the struggle for economic justice and equality and justice for Palestine?

To me, I have always said that my involvement in Occupy Wall Street was what I could do for Palestine from here. When we were doing Occupy Wall Street, my dad came and visited me in the park. He came, he sat down, and he looked around, and he’s like, “Amin, this makes sense.”

What we were doing in the park made sense because we know who funds Israel. We know that it’s not just about funding. We know why the project that the state of Israel — and I want to be clear, I am not talking about Jews or Jewish-Americans — serves the national security interests of the United States today. I think we know that those national interests are not the people’s interests. Three billion dollars per year going to Israel, with $220 million extra for the Iron Dome, is money that could be allocated for things over here and is definitely not money that should fund another people’s oppression.

What about the Arab Spring?

If you look at the history of Occupy, which actually was inspired by the Arab Spring, you can understand why what is happening in Gaza, that resistance, is another iteration or promise of an Arab Spring that all of these large powers have tried to extinguish. Ultimately democracy is about freedom and liberation. That’s exactly what the people in Gaza and the West Bank are fighting for.

What do you think about the pro-Palestine and pro-Israel labels? Are they outdated?

I think they are used so that we can legitimize both sides. So if you’re not in this camp, you’re in that other camp. Games are like that. Competitions are like that. But that is not the issue. It’s not a soccer match! Don’t talk to me about peace. Peace is a white man’s word that actually white washes the whole damn thing. Talk about liberation. Talk about freedom. Think about freedom not as something to be attained, but something to be exercised daily.

Anna Lekas Miller is an independent journalist interested in Palestine, the Middle East and creating a socially just foreign and immigration policy among many other things. She has written about topics ranging from feminism and foreign policy to racial justice and food policy and tweeted from the front lines of both Occupied Wall Street and Occupied Palestine. Follow her @agoodcuppa, read more of her work and/or get in touch.

Cecily McMillan: On being a woman inside and outside of the criminal justice system

Ukraine’s secret weapon may prove to be civilian resistance

When Martin Luther King gave up his guns