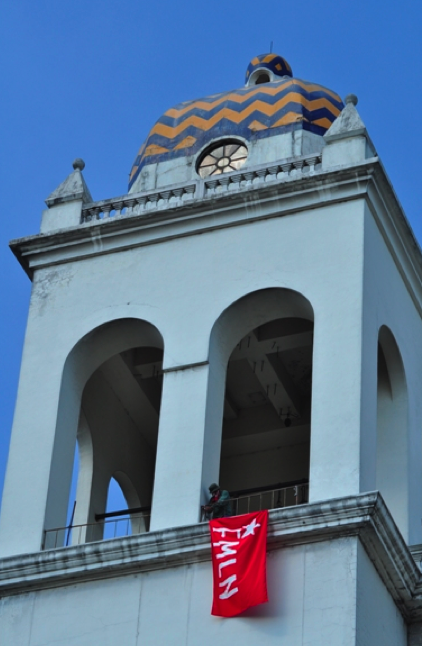 In central San Salvador this morning, members of three organizations representing veterans of the historic FMLN guerrilla forces and labor rights leaders handed over the Metropolitan Cathedral after three months of occupation, in exchange for assurances that sincere dialogue addressing the groups’ demands with the Salvadoran government will begin immediately. Their struggle will continue at the negotiation table, mediated by a permanent commission promised this morning by the director general of human rights for the Salvadoran government, Oscar Luna, who will serve as a mediator along with representatives of civic and faith-based organizations.

While in El Salvador last month on an election observation mission arranged by the Episcopal Church, I hardly expected to find myself sitting across the table from three former guerrilla fighters in the crypt where Archbishop Oscar Romero lies entombed. I had wanted to visit the tomb during my first trip to the country, but I soon learned that the Metropolitan Cathedral had been nonviolently “taken” in January by a group of former FMLN combatants and labor rights activists, and they were not permitting the public to enter the grounds. Days after learning of the occupation, though, I was invited to hear their story.

I arrived with a small group at the locked gates early in the afternoon and was greeted by one of the occupiers dressed in camouflage and dark sunglasses, looking much like I had imagined a guerrilla soldier might — intimidating. But he smiled and greeted us with small talk and the offer of a place to sit in the shade, a reprieve from the scorching sun. When the introductions were through, I was led down a cool, dark stairway to the foot of the bronze shrine to the man responsible for making the Metropolitan Cathedral “the people’s house”: Archbishop Romero, who was assassinated while celebrating mass in 1980, and remains for El Salvador a symbol of justice and struggle for equality. Beside his tomb was a table and chairs, which would be our meeting place for the next two hours.

In those weighty surroundings, we discussed the ongoing struggle for justice in the country, 20 years after the 1992 peace accords. All the while, their camouflage and berets kept causing my mind to see visions of machine guns and child soldiers. But their message that day was one of nonviolent struggle — the guerrillas are fighting with new weapons.

For years, this resistance movement has been evolving. While 14 different organizations in the country represent veterans’ interests, leaders of the groups which occupied the cathedral these months say too many of their comrades have died in poverty waiting for government action, and they decided it was time to take more drastic measures to force the government to address continued marginalization of former veterans. Collectively, veterans’ rights groups FUNDELIDDI and AVERSAL, and members of the labor organization SITRAL are seeking benefits for disabled former FMLN veterans and their families, the reinstatement of former FMLN police officers who were dismissed for allegedly political purposes, the reinstatement of a labor leader who was arbitrarily dismissed and the recognition of their labor organization. To make their voices heard, the organizations’ weapons of choice have included public demonstrations, marches, letters of denouncement, calls for negotiation, hunger strikes and finally, the occupation of this sacred space.

The organizers say that approximately 3,000 police officers, all former FMLN combatants, have been dismissed from the Civil National Police (PNC) for political purposes, in clear violation of the ’92 peace accords, which required demilitarization of the police and fair representation of both sides of the armed conflict in a newly-formed civilian police force. The officers were allegedly dismissed without due process or respect for union policy. Under the current president, Mauricio Funes, a former military general has been named director of the PNC — another step, the organizers claim, toward the remilitarization of the police force. Luis Ortega, secretary general of the Legislative Assembly Union, was dismissed in what occupiers call an attempt to undermine the strength of labor unions by means that violate international labor standards. Ortega says the denouncement of his dismissal from the International Labor Organization in Switzerland has fallen on deaf ears. Proponents of the struggle insist that the stance of the current administration, including the president and the FMLN party deputies, has been anti-union and must change.

Former FMLN combatants currently claim a pension of as little as $98 per month. This has resulted in increased marginalization of former FMLN combatants and their families, and high rates of cyclical poverty. Families of fallen veterans of the armed conflict have been denied dignified benefits by the government, resulting in extreme poverty and even death due to malnutrition and lacking the means to purchase necessary medication. While pensions have increased in the years since the peace accords, which the protesters say required “dignified compensation” for disabled and fallen FMLN veterans and their families, benefits still fall short of national minimum wage standards and are far below the poverty line.

In January, the government announced an agreement with the occupiers which included meeting some of their demands and making others a priority on the legislative agenda. In exchange, the occupiers left the cathedral on January 8, as agreed. Three days following the announcement, though, the occupiers returned to the cathedral, claiming that the government had broken its promises as outlined in the agreement. Until this morning, the cathedral remained closed to parishioners and the public, and tensions and fear of potential forced removal of the occupiers grew as people were unable to worship there during Holy Week.

As recently as last week, mediators claimed they were not making much headway with the government, which has recently sent only low-level representatives to the discussion. Occupiers claimed the government has ignored their cause and in failing to comply with agreements reached in January, are responsible for the extended occupation. FMLN deputies had claimed it was the occupiers who refused to collaborate and were exacerbating the conflict by continuing to lock people out of their cathedral. With today’s agreement, the veterans groups are hopeful that their continued struggle will end in justice for their comrades, but they say that continued pressure from the public and international community is essential to keep the process moving forward.

The proponents of this struggle with whom I met have committed themselves to nonviolent tactics, transforming El Salvador’s history of violent conflict to one of more responsible civic engagement. So far, this has been a local movement that has yet to attract the attention of outsiders, but we should all be watching. Serious labor and human rights concerns are at stake, and a truly nonviolent campaign has achieved the first step toward success. The failure of governments anywhere to recognize and respond to rights violations with due process has broad implications, potentially undermining struggles throughout the world if we choose not to engage. Write a letter, blog about this important movement and show support for continued commitment to nonviolent resolution by staying informed. This is how peace and justice are won.

Angela Smith is an international consultant with more than 15 years of experience throughout Central America and the U.S. She leads and develops diverse programs and organizational strategy addressing complex issues like migration, poverty, community violence and human trafficking. Smith earned her MA in Sustainable Peace in the Contemporary World from the United Nations mandated University for Peace. She holds Certificates of Advanced Study in Nonviolent Conflict and Children’s Rights, serves as an appointed member of The Episcopal Church Standing Commission on World Mission, and is a state advisory council member for the U.S. Global Leadership Coalition.

As coronavirus opens the door to big changes, the left’s most attractive vision faces pushback

From arms to occupation in El Salvador