Months after the police killing of George Floyd sparked racial justice protests around the world, Black Lives Matter activists are once again flooding the streets — this time in response to the recent police shooting of Jacob Blake in Kenosha, Wisconsin. Among the demands that continue to ring out is the call for reparations, or payment to people of African descent. Several African countries — including Namibia, Burundi and the Democratic Republic of the Congo — have also joined the call, demanding reparations from European countries for the perpetration of genocide under colonialism.

For many U.S. communities, these questions have been the subject of debate and discussion for years. In Ferguson, Missouri, one group of community leaders came together in 2014 after the police killing of Mike Brown to found the Truth-Telling Project — an initiative to share stories, educate communities and drive structural change against racism and systemic violence. During the COVID-19 pandemic, the Truth-Telling Project has been working on a COVID-19 Community Story Project to lift up the stories of how the pandemic has affected the lives of people of color.

Co-Founder David Ragland has witnessed the movement for reparations transform over time — from the streets of Ferguson to the recent Congressional victory of Black Lives Matter activist Cori Bush. I spoke with Ragland about the role of resistance in the fight for reparations, and the changing landscape of racial justice organizing at this historic moment.

You worked closely with Cori Bush in founding the Truth-Telling Project. What does her victory over William Lacy Clay in St. Louis signify for the role of movement leaders to shift political power in the United States?

Cori is bringing the movement to Washington, D.C. to explain why people go to the streets. Clay represented the class strivings of the baby boomers, who often sought to become a part of the system without challenging it enough. Our parents wanted us to be a part of the system so we could have a better life. Cori’s vision demands a better life, while also demanding economic, social, ecological and political justice.

I believe that hope is emerging to challenge the issues that our generation is grappling with, like climate change, racial justice and gender identity. We also see the global issues that connect the injustice here with injustice abroad.

You have written about the “Four Rs” of reparations: resistance, repentance, restitution and reconciliation. What is the role of resistance specifically in the movement for reparations?

This moment of resistance is opening the door to things people wouldn’t even consider just six months ago. When the protests began around the country, people thought, “Oh, these are new ideas.” But to some extent they’re just new to the larger American public.

“This society is irredeemable unless it pays the bill for what it’s done.”

In South Africa, you wouldn’t have had Truth and Reconciliation without resistance to bring attention to what was happening. But as we resist, our resistance has to be able to educate. Some civil rights-era policies like affirmative action benefit more white women than Black people, and the Fair Housing Act is currently part of the legislation fueling gentrification in urban communities for the last three decades, if not more. If we create a reparations program, for example, we have to make sure that racist banks are not benefitting [from that program]. So resistance is part of the continuum of making people aware with truth-telling.

As co-founder of the Truth-Telling Project, what are some of the things that have changed in the context of Black Lives Matter organizing since the shooting of Mike Brown in Ferguson?

Truth-telling really came along as a way to reinforce some of the experiences that were coming out of Ferguson, as well as places like Baltimore and Minneapolis, where Freddie Gray and Phillando Castille were murdered. We had people from around the country come to share stories, and we created an online curriculum called “It’s Time to Listen.” We partnered in solidarity with a number of groups, including Indigenous folks and Latinx folks, to add voices telling stories and shifting narratives.

[The Truth-Telling Project has] always been rooted in this truth and reconciliation framework, asking ourselves what kind of process can help our society get from where it is to where it needs to be. Over time, the hearings helped us see that stories weren’t enough — that we needed reparations.

“[Reparations] also entail measures like defunding the police, for which there is urgent importance, especially if you think about police as descendants of slave catchers.”

Indigenous land and Black bodies fueled [American capitalism]. They were the first inputs, they’re the people who maintained it and made this country possible. If you go to any major city in the United States and look at a building or structure, some person of color helped to create it. They didn’t get credit for it, and they were underpaid and abused while doing it. If many churches in Maine were built [on the profits of] mercenaries who sold the scalps of Indigenous people for $1,000 each, reconciliation is over. Reconcile with what? Pay reparations. Give back land. Restore sovereignty. It’s that simple for me. It’s a debt and it has to be paid.

If we ever want to get to reconciliation, you have to set it right. That’s gonna have a cost, and it shouldn’t just be on the government. Reparations have to be from both white institutions and white individuals, whether their relatives benefited from slavery or not. This society is irredeemable unless it pays the bill for what it’s done. I was a little bit more hopeful that peoples’ stories would change the way people behaved, that we would be able to connect on an empathetic level, and that people would be able to feel the pain we were experiencing and want to change. Then I realized the only God in this country is money. So that’s where we’re at.

Religion was one of the core methods used to maintain slavery. Churches operated as slush funds for slaveholders who essentially brought wealth into these institutions. In 1805, the Anglican Church created what they called the Slave Bible. They removed all passages about liberation and freedom and justice from it, and they promoted it around the Caribbean and southern states where slavery was happening.

So there is a long legacy of faith communities not just selling slaves and owning slaves, but propagating the institution of slavery, benefiting from discrimination and reinforcing neighborhoods’ segregation codes. Martin Luther King Jr. famously said that Sunday was the most segregated day in America.

When it comes to reparations — if not churches, if not mosques, if not temples, then who? God’s justice has to begin somewhere, and it begins with God’s people. So it is an urgent moral and spiritual responsibility that I believe is connected with the salvation of not just individual white folks, but with the entire nation. 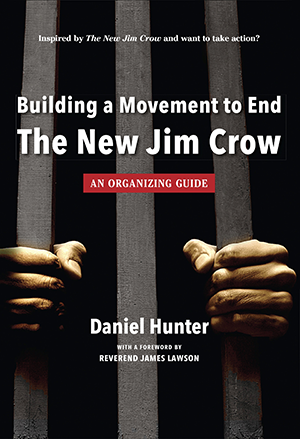 Waging Nonviolence depends on your support. Become a sustaining member today and receive this book.

You have also written about enacting reparations through measures like a gentrification tax, or looking at income and land to create a land trust that benefits people historically impacted by violence. What are some of the other policies that movements are advocating to be part of a national reparations process?

[What we need are ways for] people to redistribute wealth, allowing them to begin making what we call interpersonal repair. But reparations are rooted in what the communities need, not what people want to do. This also entails measures like defunding the police, for which there is urgent importance, especially if you think about police as descendants of slave catchers and the way they operate in our communities. Defunding the police would contribute to mental health and community [well-being] because people have so much fear of how police deal with certain situations.

We can shift to think more about the role of social workers and educators in our communities, while acknowledging that both of those fields also need to be decolonized. We need a Black parent-to-teacher pipeline, because most new teachers are likely white, and most new white teachers go to Black neighborhoods without a background in restorative justice. I don’t know if I want those people teaching my kid.

Then we have the food supply, and the importance of supporting community gardens and garden-shares. We need legislation so people can grow their own food locally in their communities.

But this reparations process is going to look different in different communities. In St. Louis, churches and universities owe a great deal. Washington University has completely gentrified University City, where Black people lived and hung out. So it’s real. It is putting the truth at these peoples’ feet and asking them to respond to it. There are various policies like ending the military transfer of weapons to local police departments, cutting support for the Pentagon, ending weapons manufacturing — it all has to be on the table now. That’s what makes this moment so important, and that’s why we can’t stop now.

Sarah Freeman-Woolpert is a writer, researcher and organizer focused on nonviolent social movements and creative action. She lived for two years in the Balkans, studying and supporting youth activist movements. Sarah now works as a grassroots organizer for peace and justice and is based in Boston.

How Black-led resistance movements are paving the way for reparations