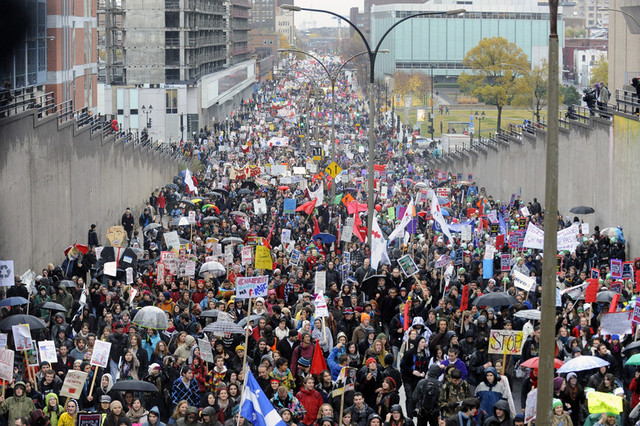 In arguably the most radical political climate north of the Rio Grande, a strike by university students in Quebec has led to the biggest upsurge in civil resistance Canada has seen in decades. There’s energy and uncertainty in the streets of Montreal, the province’s largest city. The symbol of the movement: the little red felt square (“squarely in the red,” as in, broke), is ubiquitous, pinned on the jackets and backpacks of students and supporters. Protest banners hang from university buildings and posters plaster signposts. Students are everywhere, as are the police, who dart around the city in vans, frequently deploying in full riot gear.

The Quebec government of Premier Jean Charest has proposed a 30 percent increase in tuition fees, or $1,625, over five years. The measure would raise the cost of tuition in Quebec from its current rate of $2,168 to $3,793 by the 2016–17 school year. In response, approximately 170,000 students, nearly half of those enrolled in Quebec’s post secondary institutions, with the number swelling to as many as 300,000 on key days of protest, have refused to attend classes since early February. Instead they have taken to the streets, holding daily general assemblies at campuses to determine strategy, and are engaged in a diverse range of actions — from mass marches to blockades of bridges and the Montreal Stock Exchange. On April 24, students at three Montreal-area high schools voted to begin a three-day strike of their own, in solidarity with their older peers.

The police have become increasingly prevalent. While they have intervened less in the largest marches — an April 22 demonstration on Earth Day drew 250,000 participants — sit-ins, other forms of civil disobedience and smaller actions have drawn a more aggressive response. For example, a peaceful march on April 18 of a few hundred students in Gatineau near Ottawa was surrounded by police, and 160 were arrested.

Conservative media have emphasized the vandalism committed by small groups of students at the provincial minister of education’s constituency office and a convention center where Charest was speaking on April 20, to argue for a heavier police response. In fact, mass arrests and police deployment of tear gas and pepper spray have become routine, particularly on the campuses in Montreal. For their part, the student assemblies pledged on April 22 to oppose “physical violence against individuals,” while affirming their continued use of civil disobedience strategies, including building occupations and road blockades.

Student representatives elected by the CLASSE (Association for Solidarity Among Student Unions) and two smaller student federations have negotiated with the province. The government’s latest offer to spread the tuition increase over seven years instead of five was roundly rejected Sunday morning by general assemblies of CLASSE as insufficient. Participating students voted to continue the boycott of classes. The government walked away from further negotiations.

The student strike grips the mass media in Quebec and has evoked substantial public sympathy. However to the extent that it is covered in the English-language media, awareness and support of the student’s demands in the rest of Canada remain low. Commentators frequently point out that even with a $1,625 increase, Quebec fees are still far below average undergraduate tuition rates in the rest of Canada, which range from $5,000 to $6,000.

Quebec students answer that their relatively affordable system exists thanks to a decades-long history of strong student mobilization. The concept of a student strike — effectively shutting down university campuses for weeks — would be extraordinary in the rest of Canada or the United States, where far worse austerity measures have been enacted. Student unions in Ontario are known for administering their members’ health plans and organizing regular beer keggers — both laudable activities — but political organizing is largely limited to a ritualized demonstration every February at the provincial legislature. Not so in Quebec. Province-wide student strikes in 1986, 1996 and 2005 have previously frozen tuition for several years at a time.

It helps that, since the “Quiet Revolution” of the late sixties, the province has been generally the most progressive in Canada, with the most comprehensive public programs, lowest rate of inequality and the highest level of unionization. Now, Quebec’s student strikers are attempting to go on the offensive. They refuse to accept that cuts in government funding for education are unavoidable. They reject the neoliberal premise of inevitable austerity, pointing out that the Canadian government is preparing to purchase 65 F-35 stealth fighters for a total cost of $25–29 billion. CLASSE argues the price of one plane — at $482 million — would more than cover increases in revenue gained by raising university tuition, and could in fact finance lowering fees. The association holds free tuition, as it currently exists in Scandinavia, France and Mexico, among other countries, as its ultimate goal.

While the movement is confined to Quebec, supporters in Toronto have held rallies and occupied government offices in solidarity. Secondary school teachers in Ontario engaged in difficult contract negotiations with their own provincial government, Air Canada workers prevented from striking legally by the federal government and numerous university students across Canada have pinned on the red squares in solidarity. Within Quebec, the student strikers made common cause with 780 locked out workers of the Rio Tinto Aluminum smelter, joining their picket lines in Alma and marching together in Montreal.

Reaching the end of the school year with no deal in sight, some students are calling on Quebec unions to make good on their pledges of support, with calls for a one-day, province-wide general strike. While joining rallies and providing financial resources, the labor movement has so far been reluctant to take this step, though it would substantially increase the degree of pressure on the provincial government. Activists in several unions are circulating petitions in support of a one-day “social strike.”

Meanwhile, the government appears bolstered in its determination to avoid appearing conciliatory in the run-up to the 2013 provincial election, which Charest’s Liberal Party is currently projected to lose. With high political stakes in the coming summer months, the Quebec student movement — despite its proud tradition of resistance and its impressive ability to sustain its mobilization — will face significant challenges in successfully turning back this latest example of neoliberal austerity.

Paul Bocking is a secondary school teacher, union activist, amateur filmmaker and community organizer in Toronto. He is completing is Doctorate in Geography at York University in Toronto, Canada, studying teachers' work and neoliberal education policy in North America.

No silver medal: Mexican farmers battle Canadian mine for control of their land