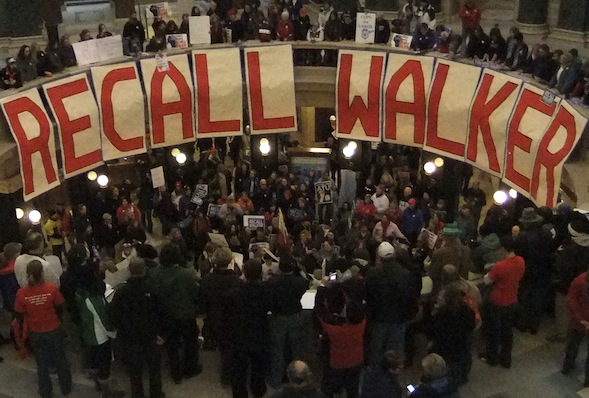 A few months after last year’s Wisconsin uprising at the state capitol, I stood in front of a packed Quaker meeting house overflowing with labor leaders, religious leaders and radical activists. They carried a wide range of feelings: a mood of failure because Governor Scott Walker had moved through his nefarious legislation, an excitement left over from daily waves of actions and protests, and a shared sense of shock and being overwhelmed. They had just inspired some of the largest impromptu civil disobedience in recent U.S. history, even prompting Democratic politicians to follow suit and flee the state in hopes of preventing passage of the bill. They also were vaguely united around a new possibility, one that I feared then would redirect the energy of the movement: “If we recall Walker, we can win.”

We now see the result. Conservatives are crowing over their guy winning by seven points. They believe Wisconsin is back in play as a swing state for the presidential campaign. Mitt Romney was quick to celebrate, saying this will “echo beyond the borders.”

Democrats worry it is a portent of things to come for states like my own, Pennsylvania, where our Republican governor is slightly more timid but shares the same goal: to slash and burn the social service safety net. That Walker won by a greater percentage then when he was first put in office, certainly gives chilling credibility to Wisconsin Lieutenant Governor Rebecca Kleefisch’s statement at her victory party: “Now this is what democracy looks like!”

Democrats and unions are nursing their wounds, rightly complaining about money in politics. In the costly election — $66 million in total, with Walker outspending Tom Barrett almost 10 to 1 — a huge amount came from outside sources. Two-thirds of Walker’s money came from out-of-state corporate interests, while just over one-quarter of Barrett’s was from outside the Badger State. But Walker also received almost three times as much in the cash donations from inside the state; he would have had a huge edge even with only in-state money.

But I want to back up and return to that Quaker meeting house.

The people in the room weren’t the Democratic operatives that flooded the state — and who, along with Republican operatives, earned a whopping $30.4 million, according to Huffington Post researchers. They were organizers, activists and union leaders.

They rightly saw that Walker’s policies could mean the death knell for many union efforts and the rollback of a host of essential services. At length, my co-trainer (and WNV columnist) George Lakey and I invited people to begin designing longer direct-action campaigns. But many in the room swung toward getting behind a unifying effort of recalling Walker. People were mostly for it right away, wooed by the straightforward logic: Take out the guy that screwed you. Makes sense, right?

The problem isn’t an individual, it’s a crisis of values and priorities. Walker won because folks saw a shrinking economic pie, and they believed he was going to do the tough but necessary belt-tightening required for the state to live within its budget. It’s a dirty secret that many union members — 37 percent — voted for Walker in the last election. His message made sense to people — or rather, the people made sense of his message.

After years of growth, the U.S. economy is shrinking, and we’re running up against differing narratives about what is to blame.

At the Quaker meeting house that day, I shared one way to frame what was happening that I had heard earlier from a union member. “We’re not broke,” I told the crowd, “our money has been stolen.” I listed examples of giveaways to corporations. “The thing is, an election strategy won’t run on our values, it’ll cater to moderates.”

Elections focus our efforts and resources on very minor wins: wooing the undecided voter, scaring off the opposition’s supporters and turning out your base. For the most part, Barrett did that. He had a slight edge on undecided voters, and he maintained 94 percent support from those who had voted last year. Where he lost was turning out numbers — Walker simply got more of his base to vote, as in 2010.

The results are somewhat depressing. In every poll, it was evident that many of the same people who voted for Walker voted for him again. He even maintained 37 percent support among union members.

Hearts and minds had not been changed. And that’s the saddest part to me, because that’s what really needs to move.

In my forthcoming book about direct action campaigns, I offer a way to think about politicians that I’ve found helpful:

Politicians are like a balloon tied to a rock. If we swat at them, they may sway to the left or the right. But, tied down, they can only go so far. Instead of batting at them, we should move the rock: people’s activated social values. When we moved the rock, it automatically pulls all the politicians towards us — without having to pressure each one separately.

Here in Pennsylvania, we were able to stop a big $560 million casino development project that had outspent us 200 to 1 — not including money they donated to city and state politicians, judges and media. We moved the population from being 80 percent supportive to mostly against because we ran campaigns based on values, instead of short-term political efficacy.

To wit, our first campaign was called “Operation Transparency.” We asked for all of the casino planning documents — things like site plans, social impact studies and traffic plans — to be released by December 1 at high noon. If not, we vowed to release them ourselves through a nonviolent search and seizure operation.

Our campaign built tension and drama, and it culminated in our widely-covered civil disobedience as we tried to obtain the previously hidden planning documents. Without us having to say it, it raised the question: If casinos are so great, why are they being so secretive? Show, don’t tell — that’s the way to change people’s hearts and minds. It was the strategy of the civil rights movement in the South — exposing the violence and hypocrisy so it can be seen more clearly.

To do that, we have to say no to some of the short-term strategies — like a lot of electoral campaigns. Unfortunately in Wisconsin, nearly all of the energy got sucked into the recall movement, whose framing was led by Democratic operatives. I don’t know of any Wisconsin direct action campaigns — and by saying “campaign,” I’m excluding one-time actions or routine vigils and marches — that tried to reframe the debate. And that’s a major problem.

As our Pennsylvania governor acts like a fool, it’s going to be tempting to pour resources into the next electoral campaign against him. But if we keep doing that, we’re going to cycle ourselves year-in and year-out into the small wins of the electoral world. We might win elections, but we’ll keep losing hearts and minds. Instead, we’ve got to look onto a big horizon and take to long-term, direct-action campaigning.

Daniel Hunter is the Global Trainings Manager at 350.org and a curriculum designer with Sunrise Movement. He has trained extensively from ethnic minorities in Burma, pastors in Sierra Leone, and independence activists in northeast India. He has written multiple books, including the "Climate Resistance Handbook" and "Building a Movement to End the New Jim Crow."

Was the Walker recall effort the wrong fight?