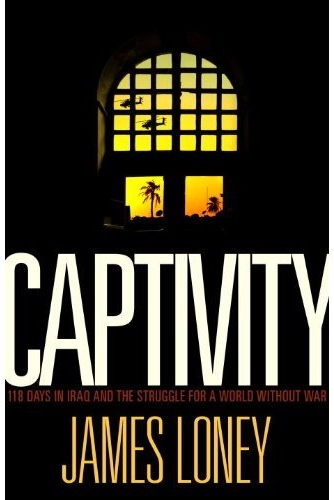 On November 26, 2005, four Christian Peacemaker Team members serving in Iraq — Tom Fox, Harmeet Singh Sooden, Norman Kember and James Loney — were kidnapped at gunpoint by a group of insurgents and held at an undisclosed location for four months. Fox, a former U.S. Marine turned Quaker, was murdered, but the other three were freed in a military operation carried out by U.S., British and Canadian troops on March 23, 2006.

Though no one was killed or injured in the rescue, the irony of a crew of peace activists being plucked from danger by armed coalition forces was lost on few observers, least of all those who were suddenly liberated. In Captivity, his recent account of this harrowing ordeal, James Loney grapples with this and many other paradoxes that wove through nearly 17 weeks of terror and transformation. It is the author’s willingness to wrestle with these contradictions that makes this volume so riveting and valuable, especially for those of us who long to live the nonviolent life in a catastrophically violent world.

But the first paradox is our own. There is something important about the appearance of a book about a war we think we’re finished with when, in fact, we hardly have begun to make sense of it. As strange as it may seem to some of us who were deeply involved in resisting the U.S. war in Iraq, this conflict now seems light-years old. While this is not the case for tens of thousands of U.S. service women and men who were disabled in Iraq — and certainly not for the millions of Iraqis whose lives were destroyed or monumentally disrupted by the U.S. invasion and occupation — many others have moved on, due in part to the metamorphic nature of the “war on terror” and its shift from Iraq to Afghanistan, Pakistan, Yemen and the perennial preoccupation with Iran. Though U.S. military operations in Iraq raged on unabated until the end of last year — and the geopolitical, economic and human consequences from this eight years of war will be with us for many years to come — it has dramatically receded from view.

Loney’s book vividly rockets us back into the thick of this calamitous war and its innumerable rivers of intended and unintended consequences that incessantly overflowed their banks and flooded the country with the inescapable misery of escalating terror. Not only does this volume resurrect these realities, it reminds us that we have not fully reckoned with it. Where is the accountability for a war waged on a set of pretenses that turned out, by the Bush administration’s own admission, to be false? Where is the Truth Commission? Where is the profound soul-searching as a people? To vigorously disinter these matters — to remember and, by remembering, to change — is our historical responsibility and is as much a nonviolent action as the waves of protest that challenged this policy from 2003 forward. Captivity jogs our conscience to do so.

This memoir is part of the larger counter-narrative that movements for the past century have asserted with increasing conviction — that nonviolent people-power offers a powerful alternative to structural violence and passivity. In his own elaboration of this, Gandhi envisioned, among many other things, a Shanti Sena or “peace army” that would nonviolently intervene in large-scale conflict and war. His disciples built such a force, and it also inspired the creation of a number of other organizations around the world, including the Nonviolent Peaceforce, Peace Brigades International and Witness for Peace.  In the 1980s, Christian Peacemaker Teams (CPT) appeared, dedicated to fielding highly trained groups to support peacemaking in war zones. Since its founding, CPT has spent enormous time in Iraq. Loney, who had served two other stints with CPT in this country before being abducted, describes the work in this way:

We came to Iraq on a mission of peace, to build bridges between the people of Iraq and the people of the west, and to try to share with the ordinary people of our countries the stories of ordinary Iraqis in a time of war and occupation. In this way, we wanted to be a small part of turning the tide of public opinion against the continuing occupation of Iraq.

In his own explanation, Tom Fox drilled down into what he saw as the deeper foundations of the war. The day before he was kidnapped, Fox wrote a reflection entitled, “Why Are We Here?” which ended with these thoughts:

Both of these vision statements were exceedingly tested during their four months of captivity.

Detailed, well-plotted and situated in the broader context of the war and its fallout, Loney’s riveting book pitches us into the claustrophobic world of traumatic forced confinement, where the four are chained together and they are regularly threatened with death. As harrowing as this experience proves to be, he is careful throughout to note that others have faced far worse — the untold thousands who perished under 13 years of sanctions, those killed and displaced by the “Shock and Awe” invasion, the inmates at Abu Ghraib and Guantanamo Bay. This is not only an attempt at filling out the larger picture of violence and injustice, it is also the author’s way of recognizing the humanity of those who have been systematically dehumanized.

Little by little, he extends this to his captors as well. Almost by happenstance, their stories emerge — how their transformation from workers or students into self-styled mujahideen was fueled by the outrages of the U.S. invasion — the bombings that flattened their villages, the indignity of being arbitrarily pulled from a car for interrogation. One of the paradoxes that runs through this account is the opposition to the war that the captors and captives share. Though they naturally differ on the means of carrying out this opposition — and there are a few exchanges on nonviolent resistance versus armed struggle — they are both committed to an end to the war. Perhaps this is one of the reasons there are subtle demonstrations of human connection as the weeks pass, including an abrupt upgrade in the food (which in general verged on a starvation diet) or the sudden appearance of a few items requested by the hostages (toothbrushes, a blanket, antacid tablets).

But even with these occasional sparks of shared humanity, the power differences remained, and Loney spends a good part of the book freely describing the rage he regularly felt at his powerlessness. At the same time, he loathes himself for not expressing it but, instead, largely submitting. He is clear why he did so — he knows to do otherwise was to court almost certain death — but he nonetheless ceaselessly questions to what extent this accommodation was right. He knows the pitfalls of Stockholm Syndrome — in which hostages express empathy toward their captors — and is continually querying himself on the fine distinction between “love your enemies” and “condone your enemies’ violence.”

Loney’s anger is not limited, though, to his captor. One of the remarkable things about this book is his honest exposition of his interior rage directed at his fellow captives, which occasionally spill out either constructively or destructively. Loney is consistently grappling with the tension between being a peacemaker and being regularly seized with suffocating anger. Much of the book documents how he struggles to channel this anger. Sometimes he succeeds; sometimes he doesn’t. This, though, is a strength of the book. Stoic, high-minded reflections on justice and nonviolence are few and far between in this book (and when they appear, they are not especially compelling). More riveting are Loney’s day-to-day swirl of feelings and the moment-to-moment decisions that he and the others have to make to remain human in this chamber of horrors.

Captivity recounts a chillingly extreme situation. But I couldn’t help but think about the lessons it might hold for the rest of us. A book-length mediation on fight, flight, and accommodation — with Loney relentlessly plotting the logistics of escape — this texts interrogates us: What is our option in the midst of a society that orders up one war after another, with all the collateral damage they inflict at home and abroad? Accommodate? Escape? Resist?

“While some of us are in prison, everyone else is on probation,” the late, longtime peace activist Phil Berrigan is reported to have said. Our captors may not be chaining us together in a safe house somewhere, but we are nevertheless facing these choices. James Loney’s book sharpens the paradoxes and possibilities of these options for us as we take up the challenge of transforming this suffering world.

Time to speak up — women’s prison resistance in Alabama