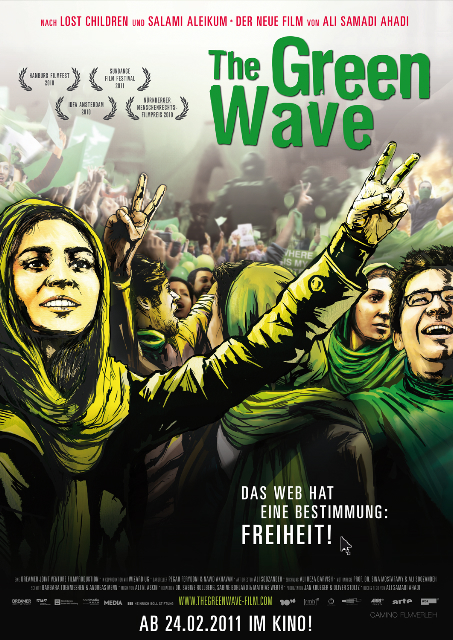 As the debate in Washington on whether to strike Iran advances — at the continued behest of Benjamin Netanyahu — the memory of the 2009 popular uprising against Mahmoud Ahmadinejad’s disputed reelection recedes. Ironically, the same people who were championed for taking to the streets are now potentially facing bombs and protracted war. It’s as if the world has no memory — not only of the Iranian people, whose courage was the source of daily coverage in the Western media that summer, but also the potential of people power to affect real and lasting change.

The recently released documentary The Green Wave is an invitation to remember. By recounting the early days of the Iranian Green Movement through the eyes of two fictional students and bloggers (the composite of over a thousand different entries in Iranian blogs), director Ali Samadi Ahadi tells the story of the Iranians who poured into the streets, screaming “Where is my vote?” At the same time, however, it also shows what happened next: kidnappings, beatings, stabbings, shootings and disappearances.

While the The Green Wave offers a reminder of the remarkable people who risked their lives for democratic change, it falls short in offering a way forward. There is no smile and no hope, but only fears as the audience is taken to dark rooms and torture cells — ultimately left feeling unsure of how this movement even formed in the first place. Knowing that history helps explain why, after three years of violent repression, Iranians still seem eager to rise up once again.

Despite the perception that the movement was led by elite and opposition leaders, it was the populace that started the demonstrations. Only after this mobilization did the reformist leadership join the protesters and help coordinate demonstrations and strikes.

Some analysts argue that one of the most obvious errors of the Green Movement was the dependence of the populace on these leaders. As evidence they point to the decreased number of demonstrations following the house arrest of the two major leaders of the movement, Mehdi Karoubi and Mir Hossein Mousavi.

Reviewing the Green Movement’s successes and failures demonstrates that it is in the fifth stage of Bill Moyer‘s Eight Stages of a Social Movement. According to Moyer:

After a year or two, the high hopes of movement take-off seems inevitably to turn into despair. Most activists lose their faith that success is just around the corner and come to believe that it is never going to happen. They perceive that the powerholders are too strong, their movement has failed, and their own efforts have been futile. Most surprising is the fact that this identity crisis of powerlessness and failure happens when the movement is outrageously successful — when the movement has just achieved all of the goals of the take-off stage within two years.

This final point of Moyer’s is a positive one for the Green Movement and is bared out in my own interviews with Iranian activists. There is a strong and common belief, especially among young green activists, that “the movement has not died.” They believe that the movement is alive, but in a state of hibernation. The government seems to believe this as well, monitoring even minor activists, their families and friends. It knows full well the strength of this movement, its skill at organizing public demonstrations through Twitter, Facebook and YouTube, as well as reaching the outside world in spite of all efforts to block global electronic communications.

This current state of hibernation has not been helped by the international economic sanctions imposed on Iran. Many people are too distracted by their daily needs being threatened to focus on the movement. Meanwhile the main activists, organizers, planners and thinkers who would be working to move beyond the current situation are regularly placed in prison.

If this state of hibernation is to be broken, the movement needs to re-strategize and remind the populace of its beliefs, values and interests. Serbia’s Otpor movement did just that a little over a decade ago. Not unlike Iran today, Serbia was enduring U.S. economic sanctions and struggling with domestic pressures. But Otpor overcame the fears created by former Prime Minister Slobodan Milosevic by using tactics that put the government in a position where no matter how it reacted — either by ignoring the protesters or cracking down on them — it would lose. This strategy empowered the populace and led to increased participation and ultimately a general strike, which forced Milosevic out of power.

While some critics and analysts from outside and inside Iran continue to complain about the lack of strategic leadership and campaign organizing in the Green Movement, valuable time is being lost. They should instead be helping to strategize on how to wage a long-term campaign for the movement that will spur successive moves leading toward the achievement of social and political reforms.

Where The Green Wave fails in portraying hope and the positive aspects of the movement, it at least succeeds in reminding the world that Iranians desire to secure their own peace and justice. The story of how they awaken from hibernation and move forward in the aftermath of torture and suppression will be found in the next green wave. After all, the tide may go out, but waves will continue to roll in.

Sahar Namazikhah is an Iranian journalist based in Washington D.C. She spent 2009 and 2010 inside Iran reporting on the election and the movement.

Reimagining the Boston lockdown — from SWAT team to peace team

The Green Wave washes over a movement in hibernation