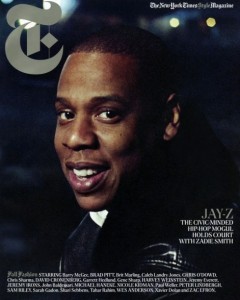 What do Jay-Z and Gene Sharp have in common? Not much, you would think. But trust The New York Times Style Magazine to unite two strands of American culture as no one has done before.

The rapper and the nonviolent theorist were both profiled in the latest edition of the magazine. The 84-year-old Sharp is even listed on the cover along with actors Jeremy Irons, Chris O’Dowd and Brad Pitt.

But the stylists don’t dress him up or ask him to look pouty or pensive. They don’t even offer additional information about his clothes and where you can buy them. Jay–Z — by way of contrast — is photographed in very expensive casual clothes: a $1,200 suit by Calvin Klein, a $560 designer sweatshirt, $150 jeans and, in one picture, a $16,400 watch. What Gene Sharp and his nonviolent cottage industry, the Albert Einstein Institution, which he runs out of his house in Boston, would not give for a few donations worth even half as much as one of Jay-Z’s outfits!

The only product placement in the large photo accompanying the Sharp profile is for the War Resisters League’s annual pie chart outlining how much of U.S. tax dollars go directly to the U.S. military. The article’s author is Janine di Giovanni, a European journalist who has also written a memoir, Ghosts of Light, about her life as a war correspondent, her love affair with and eventual marriage to another war journalist, their decision to have a child, and how the horror of what she has seen, experienced and written about affect her life as a (now single) mother. Her son’s name is Luca — “bringer of light.”

Has nonviolence become hip, fashionable, or (god forbid) profitable? And if not, what is it doing in a magazine thick with ads for watches and suits and furs so pricey they could keep the nonprofit industrial complex humming for years? Could it be as simple and innocent as the desire to introduce Sharp’s history-changing ideas and strategies to a new generation, a new constituency, a new posse?

Even if that was not the purpose of the article, that’s exactly what it did to me. Dear readers, I must confess it was the longest article I have ever read about Gene Sharp. It was the first time I dipped into From Dictatorship to Democracy. It was even the first time I browsed the 198 methods of nonviolent action. Yep, I have not been keeping up with my activist reading! Even though I have deployed what Sharp calls “nonviolent weapons” (more than 20 by my count) on many occasions, I have not fully appreciated how big our social and political change toolbox really is. We can move beyond the sit-in or die-in, to the wade-in, mill-in, stall-in and pray-in. There is also nonviolent land seizure, politically motivated counterfeiting, protest disrobings and “haunting” officials. Some of these methods sound like a lot of fun and can be combined for extra enjoyment (naked haunting of elected officials anyone?), but Sharp warns against just choosing tactics based on personal preferences or wanting to show off your six-pack abs.

As I read the article, I kept waiting for the pictures of men with expensive clothes on. If not Sharp himself, maybe those who saw his analysis of power alive in their own lives and agreed that corrupt and unaccountable power is vulnerable could be dressed up for the magazine. I expected to see some young hip Tunisian activists with laptops and cellphones and Nike shoes shown against the backdrop of a fruit cart in a narrow alley, or the founders of Optor! — the group that took on Milosevic in the late 1990s — looking stern and resolute against a graffitied wall, maybe wearing slick sweatsuits, thick gold jewelry and dark shades. That might fit. After all, one of the group’s founders told Tina Rosenberg last February: “Our product is a lifestyle. The movement isn’t about the issues. It’s about my identity. We’re trying to make politics sexy.”

Gene Sharp might not agree with that, but he doesn’t have to. It’s not his revolution. It is just his ideas being applied. And he emphasizes again and again that what revolutions need is an analysis of power and its vulnerabilities, a plan for exposing and exploiting those vulnerabilities, and a lot of thinking about what comes after. What matters is not the plan that worked the last time, or what would be the most fun (again, naked haunting, anyone?).

And so, fittingly, the pictures that accompany the article are of him in his messy office and him meeting with Coretta Scott King in 1978.

One of the things that I find compelling and challenging about Sharp’s work is its focus on the practical. Coming out of the Catholic Left (love your neighbor as yourself, do good to those who persecute you and do good for good’s sake — not for reward or outcome) and the War Resisters League (the goal of which is to end war and remove the causes of war), the idea of nonviolence as a strategy rather than a religious tenet or high minded lifestyle choice is new. (This is not to say that some within the WRL are not super strategic, I am just not one of them. I am on the lovey-dovey side). The Times article quotes Sharp’s The Politics of Nonviolent Action, in which he writes: “Exhortations in favor of love and nonviolence have made little or no contribution to ending war and major political violence.”

Dang! He may be right, but ouch! I have some work to do! I think I’ll listen to “Empire State of Mind” while I get down to business with Gene Sharp’s rocking knowledge.