“With your work you can inspire movements,” said Carlos Latuff, the Brazilian cartoonist whose illustrations have transcended borders by telling stories of resistance and injustices. He has published cartoons about the war in Syria, the “Mães de Maio” movement in São Paulo, the struggles of the People’s Popular Assembly in Oaxaca, and the media duopoly that Televisa and TV Azteca have in Mexico, which was highlighted most recently by the Yo Soy 132 youth movement.

His latest cartoons, however, are about the war being waged in the occupied territories in Palestine, which he said “is almost like déjà vu… when elections take place, Israel decides to attack Gaza. It’s more or less like this: when you have problems, invent a war and your popularity will grow.”

Over Skype, I spoke with Latuff from his home in Rio de Janeiro about the importance of creativity and art as a tool for resistance and the role of artists, cartoonists and independent journalists who report on social movements around the world.

What do you try to reflect through your illustrations about what is happening now in Gaza?

My drawings try to reflect the indignation of someone who simply cannot manage to see reality through the established mainstream media. I believe that the mainstream media takes sides when it shows what is happening in Gaza, and it is without any doubt “pro-Israel” and on the side of the United States.

What I try to do with my cartoons is expose the double standard of the commercial media, which tends to justify the crimes committed by Israel against the Palestinians in the name of a so-called “self-defense” or “security,” and show the other side — the side of Palestinians, which is the one not shown.

Do you see your work as a tool for resistance?

What lessons has the Arab Spring given us in regards to this?

It left us with many lessons in terms of communication. For example, I followed the Egyptian uprising from the beginning to the end on Twitter. And I can tell you that the things that the Egyptians were not able to read in the newspapers or watch on Egyptian television — either because the news couldn’t or didn’t want to show it — you could find it all on Twitter.

The pieces I did at the beginning of Egypt’s revolution weren’t published in the Egyptian papers — except for a few. When the military took over, the drawing I did of the Egyptian generals wasn’t published, but even so, thanks to the Internet people could see it.

How else has the Internet changed the way you work?

In the 1980s, for example, the only way I could publish my pieces was through large newspapers. The only way a foreign audience might see my work was if I was published in a magazine such as Time or Newsweek, the international mainstream media. It made things very difficult.

Today there is the possibility of working online on content that need not be linked to large newspapers or large television networks. Now, the Internet helps my work to go viral. Without that tool, I’d be constrained to Rio de Janeiro, or to the press syndicate where I work, which unfortunately doesn’t have a very wide reach. If it weren’t for the Internet, independent media, blogs, Twitter and Facebook, lots of people wouldn’t know my work. 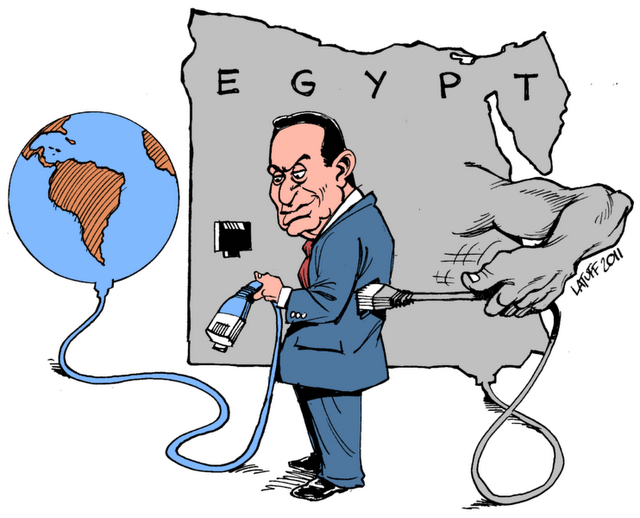 Your cartoons have gone viral online. People print them out and go to protest with them. What role does art like this play in social movements?

In my opinion the powerful thing about my drawings is that they get used beyond their purely editorial function. The people who see my pieces don’t just keep them in a book, a newspaper or magazine; they take them to the protests, to the demonstrations. Cartoons have a key importance. They have become an instrument of struggle. The drawing is our voice and expresses, without words, what is being felt. That’s what happened during the Arab Spring in Egypt: People printed the drawings and took them to the streets because they identified with the images.

It’s important to make art that isn’t just made for a newspaper but can be reproduced in any space — be it with a stencil, on a T-shirt or through graffiti. A lot of my pieces have been turned into graffiti on the walls of Bahrain and Egypt.

When you put your work at the service of social causes — of people’s struggles, of militants, of protesting activists — they will use your art for their struggle, and it becomes a tool of resistance.