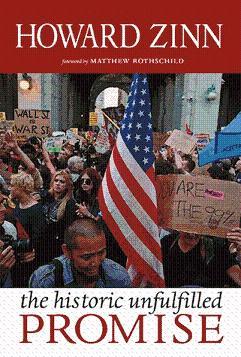 Can it really be almost three years since Howard Zinn left us? The author of the groundbreaking classic A People’s History of the United States and a relentless catalyst for social change since the 1950s, Zinn was always prodding us, by his words and example, to take the next step for a more just and sustainable world. While he’s no longer here to turn out perceptive analysis or to join the next action, we still have his words — and the memory of his example, like this moving account from his friend, Daniel Ellsberg — to remind us what is possible as we move forward into a future that will need the kind of bold and stubbornly nonviolent action Howard Zinn was capable of.

Now, City Lights Books has made Zinn’s call to action more accessible by publishing The Historic Unfulfilled Promise. This collection features essays Zinn wrote for The Progressive magazine beginning in 1980, though most of the pieces concentrate on the last years of the Clinton administration and the first decade of the 21st century, chronicling his take on the Bush presidency and the first two years of Obama’s. Here he is training his eye on the U.S. government’s often appalling foreign policy decisions, though the foreclosure crisis and economic inequality also come in for some ink as well. At the same time, as always, he lifts up what ordinary people were doing, or could be doing, to make a difference.

While he was writing these analyses in real time, Zinn brought his tools as a historian to bear on the still-unfolding present, though without the luxury of the distance that the passage of time can bring or the weighty documentary record that helps with historical writing. He was trained to notice trends and make connections, and these skills are on display here. Most of all, he can spot history repeating itself — when, for example, he compares the Spanish-American War with the U.S. war in Iraq.

Here as elsewhere, Zinn applies what he sees to be the double task of the historian.

If history is a nightmare from which we are trying to awake, as Stephen Dedalus remarked in James Joyce’s novel Ulysses, then the historian’s job goes well beyond fact-checking and dispensing sleeping pills. The historian’s mission is not to normalize the nightmare, justify the nightmare, wish away the nightmare or pretend that the nightmare never happened. The job, instead, is to unearth the nightmare — political, economic, cultural and psycho-historical — in all of its messy, three-dimensional fullness and consequences. But this is only the beginning. The second step is to illuminate all the ways it has been resisted. Who took action? Who pitted themselves against it? Who woke up? Who set the alarm clock for the group or community or nation? The historian’s chore is to tell the whole story with its full set of characters — including the many resisters, agitators and change agents who played a pivotal role in challenging and sometimes even dispelling the nightmare.

Howard Zinn pursued this double duty in powerful and illuminating ways. His A People’s History of the United States set a standard for widening the aperture by chipping away at conventional, triumphalist readings of U.S. history and by lifting into view the innumerable social movements organized over more than 200 years by those mostly left out of the canonical narrative: poor and working class people, communities of color, women and others at the margins. For Zinn, the story of nonviolent struggle — rooted in the power of nonviolent disobedience and defiance, of withdrawing consent, of not going along, of pulling down the otherwise sturdy pillars of support — must be told if we are to make any sense of history at all.

This task is not only that of the professional historian, and it does not only apply to movements from long ago. This must be done now, today, by all of us, as our campaigns for justice and peace are unfolding. Otherwise, domination systems will do everything in their power to erase the memory of these struggles for change, even when — especially when — they have been successful. This is the wake-up call that, by his life-long example, Howard Zinn extends to us even now: Document! Frame! Tell! Tell again! Zinn’s fundamental message bears underscoring: Nonviolent action is critical. Communicating nonviolent action is critical. Communicating nonviolent action is, in fact, a form of nonviolent action.

Campaigns and movements seem to be paying much more attention to this than previously, with the proliferation of social media documenting nonviolent struggles and with the emergence of such sites as this one and the Global Nonviolent Action Database. I nevertheless suspect that virtually every existing campaign or movement could still use more creative strategies to document, interpret and raise awareness of both “the nightmare” and the people power working to dismantle it. I know this has been true of movements I have been part of.

Zinn practiced what he preached by both writing about nonviolent action and taking nonviolent action. In The Historic Unfulfilled Promise he reflects on the roots of his commitment to action. In an interview conducted by David Barsamian, Zinn recounts how, as a 17-year-old living in Brooklyn, he was invited to attend a demonstration in Times Square by some people he knew in his neighborhood. It seemed like an exciting idea, so he went. He ended up helping to hold a banner just about the time the mounted police showed up to break up the march. Horses were driven into the crowd. People were beaten. Zinn was hit and knocked unconscious.

When he awoke, he was lying in a doorway and everyone was gone. He had an epiphany that day: “All the things these radicals had been saying were true. The state is not neutral, but on the side of the powerful. …These people were engaging in a nonviolent demonstration, presumably protected by the Constitution and — zoom! — the police are there beating heads and breaking up the demonstration.”

Novelist Saul Bellow, in his book Henderson the Rain King, writes, “Truth comes in blows.” Gandhi seemed to come to this conclusion after landing on the railway platform in South Africa in the middle of the night after being tossed off the train for being a person of color who had the temerity to sit in first class. This blow led him to a search for truth and a vow to resist humiliation and injustice with every fiber of his being. For Zinn, his Time Square “wake up” set him on a course of nonviolent resistance for the rest of his life. This journey of action and reflection would lead him to participate in the Civil Rights movement (while teaching at Spellman College in Atlanta), the anti-Vietnam War movement, and even a campus-wide strike at Boston University, where he taught for many years, which he recounts in this book.

This life journey and its lessons — and his own double task as a historian — seep into the essays in The Historic Unfulfilled Promise as Zinn grapples with the Bush and Obama years.

It is jolting to read through the last decade in virtually one sitting, with the pace of the past-that-is-still-present, yet seemingly long gone as well, accelerating and flying by. The string of presidential elections. September 11. The invasion of Afghanistan. The headlong rush to war in Iraq. A fatuous “Mission Accomplished” and the miasma of death and vendetta spinning out of control. The call for impeachment. A string of demonstrations and mobilizations. An economic meltdown.

At every turn, there is the word “terrorism,” a term that has supplanted “communism” in its power to stop rational discussion and to justify virtually absolute military power. (In an essay written while George W. Bush was president, Zinn complains about a military budget of $400 billion, a figure that now strikes one as almost nostalgically quaint.) Zinn takes every opportunity to unpack this term, “terrorism.” War is terrorism. War does not quell terrorism. War only increases terrorism. Only something so different from terrorism will do that. It is this “something else” that Zinn pursued his whole life.

As Zinn churns through the decade there is no let up. He’s taking up each lamentable wound on the body politic as it appears — from endless wars to the foreclosure crisis. The fact that he addresses each turn in the journey with the instincts of an historian (who often must wait a generation or two before the positive and negative dust settles) may be why his judgments hold up so well.

For example, he is skeptical about Barack Obama. While he saw that there was a difference between Barack Obama and John McCain during the 2008 presidential campaign, it is, he writes, “not significant enough for me to have confidence in Obama,” unnerved as he was by the squabbling between the two candidates over “which war to fight.” Obama’s subsequent policies bear his cautions out.

He, like others, is perplexed that a president waging two wars could be awarded the 2009 Nobel Peace Prize. In the last piece published before his death in January 2010, Zinn wrestles with this baffling move by reaching back to the Vietnam years and asking: What if the Nobel Committee had awarded President Lyndon Johnson the prize in 1965, with the hope that this would have helped end the war?

Zinn’s answer is clear. It isn’t prizes or other glittery inducements that make change. It is powerful social movements. It is only people power that has any chance of fulfilling the historic, unfulfilled promise. His parting words still bear a truth worth pondering: “Obama, far more likely than Bush, might respond to such a national movement, which would demand bold change. That’s what it will take. Today. To award him a prize, to applaud his rhetoric, is by no means a substitute for such a movement.”

In short, Howard Zinn continues to sound another wake-up call in our direction.