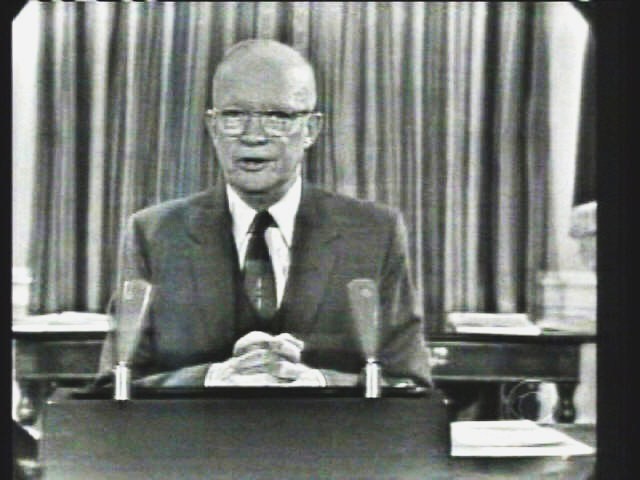 On January 17, 1960, Dwight Eisenhower famously called out the “military-industrial complex” in his last presidential speech to the nation. Though it apparently provoked little serious comment at the time, this 15-minute broadcast has steadily grown in stature over the past half-century, with its clear warning that “the potential for the disastrous rise of misplaced power exists and will persist” with the emergence of a permanent war economy.

Some commentators, like latter-day spin doctors, downplay this aspect of the speech, viewing it simply as a restatement of typical Cold War fare. While Eisenhower did invoke the struggle with the Soviet Union (“the conflict engulfing the world” that “unhappily promises to be of indefinite duration”), this was not the point of his address. We now know that he thought about this speech for two years and worked on several drafts, concentrating on the danger of the “conjunction of an immense military establishment and a large arms industry” whose “influence — economic, political, even spiritual — is felt in every city, every statehouse, every office of the federal government.”

Eisenhower was no pacifist. Not only was he the supreme allied military commander during World War II, he threatened to use nuclear weapons as a way of ending the Korean War and ordered and authorized disastrous covert action and military operations in Iran, Guatemala and Indochina. Nevertheless, it is possible to regard his farewell to the nation less as a speech and more as a daring, and unexpected, nonviolent action.

Eisenhower’s speech qualifies as an act of nonviolent resistance by its willingness to shred the typical script. Streaming now across the intervening decades via YouTube, the speech offers the expected pieties that embroidered the ideological framework of Eisenhower’s America: the United States’ commitment to world peace and to “liberty, dignity and integrity among peoples and among nations,” but also to using its vaunted economic and military power to defeat an implacable foe who threatens these values of “human betterment.” So far, this would have been the expected message of the time, where high-minded ideals went hand in hand with containment of the Soviet Union and a barreling arms race.

But then the conventional script starts to slip. Eisenhower speaks about a profound transformation going on in the country. While the U.S. historically operated on what he labels an “emergency improvisation of national defense,” it has now moved to “a permanent armaments industry of vast proportions.” Though this idea probably would not have shocked many of his viewers, it still may have struck some as strange that the president was mentioning this. It didn’t jive with the typical narrative.

Nonetheless, this foray into unfamiliar territory (especially for a presidential oration that was supposed to be more of a sentimental valedictory address than policy presentation) could still have been blended into the conventional discourse. He could have framed the new institutionalization of the arms industry in triumphalist terms: How wonderful! We have built a powerful and perpetual weapons sector that will defend and secure us forever. After all, “vast proportions,” in abundance-minded America, is a good thing.

But this is not the argument Eisenhower wanted to make, and at this point the script starts to go monumentally awry. In short order he challenges the stupendous qualitative and quantitative growth of the military, the integration of war contractors and the Pentagon, the impact this is having on policymakers, and even the threat it poses to civil liberties and to democracy itself.

Going off script is not something presidents typically do. Eisenhower probably understood the potential risks and backlash he faced for challenging a system he had given his life to since his days at West Point — which is probably why he wrote and re-wrote this speech and why he waited until three days before leaving office to deliver it.

But Eisenhower himself was caught on the horns of a dilemma. He could see the long-term danger of this course — but he also saw no real alternative. Several times in the speech he says as much, including this pithy statement of the contradiction: “We recognize the imperative need for this development. Yet we must not fail to comprehend its grave implications.”

The only hope the departing president held for squaring this circle was a mobilized public: “Only an alert and knowledgeable citizenry can compel the proper meshing of the huge industrial and military machinery of defense with our peaceful methods and goals, so that security and liberty may prosper together.” Eisenhower’s intuitive belief in people power was right, but his ultimate answer — somehow appropriately meshing and balancing the means of war production with the government’s capacity to make war — was wishful thinking. He saw the problem — how the geopolitics, economics and even spirituality of war had been put at the very center of our society — but he could not imagine following through on the vast, therapeutic de-militarization that solving this problem required.

So here we are, 53 years on. The “vast proportions” are vaster yet. Virtually permanent war since Eisenhower uttered these words has helped deepen and broaden the United States’ enormous military infrastructure. As senior research fellow at George Mason University Veronique deRugy puts it, “Today we are living Ike’s nightmare. Defense spending is not just one of the most sacrosanct parts of the budget but also one of the largest and most inscrutable. Adjusting for inflation, military spending has grown for an unprecedented 13 consecutive years and is now higher than at any time since World War II. Even excluding war costs, the military baseline budget has grown by about 50 percent during the last decade.”

One measure of this is the more than a thousand U.S. bases ringing the planet, and their economic costs, which researcher David Vine has calculated to be in the neighborhood of $170 billion annually. In his 1960 speech, Eisenhower said “three and a half million men and women are directly engaged in the defense establishment.” In 2013, an estimated 6.1 million people work in the military-industrial complex. (Eisenhower also added this eye-popping claim: “We annually spend on military security more than the net income of all United States corporations.”)

With the government’s growing financial crisis, there is a chance that cuts to the military budget may finally be an option. But wonkish fiscal debates will not be enough to begin to dislodge the centrality of the military-industrial complex in American life. This will mean dealing with those more intangible — but crucial — realities Eisenhower was grappling with: core values, civil liberties, democracy itself.

A concrete way this could be done would be to build a powerful movement calling on the nation to take stock of the continuing militarization of society and its consequences. One specific focus could be the drones build-up. What began as a tactic is now changing America and the world geo-politically, culturally and existentially. As the lynchpin of a mounting global surveillance and weapons system, drones are a concrete manifestation of the worrisome hunch Eisenhower carried with him into retirement.

I wrote about drones on this site recently, suggesting that making the local connections to this burgeoning phenomenon could be the basis for deepening and broadening the anti-drones movement. Nationwide we could bring the questions about this latest wave of the military-industrial complex home by building local, regional and national action campaigns focused on drone bases and training facilities, but also corporations that are building them.

In that post I referenced a campaign that some of us were part of in the 1980s that could offer an example: “The Local Connections Campaign” was part of the Pledge of Resistance movement that was working to end the U.S. wars in Central America at the time. In March 1988 we launched this effort with coordinated nonviolent actions at bases across the U.S.

In the buildup to these nationwide actions, I spent a week at the Center for Defense Information pouring through its files attempting to identify facilities that, one way or another, were supporting U.S. military intervention in the region. The result was a short publication that profiled these facilities according to different categories (weapons shipments, training, surveillance, etc.). I have posted this document here to suggest the kind of research that could be done mapping the local connections to the growing drones system and the kind of organizing that could be done.

Dwight Eisenhower, for all of his prophetic alarm, could not see past the need for an ever increasing militarized society. This has been left to those who have been living all their lives with the consequences of what he foretold.

What if congressional staffers went on strike until protesters’ demands were met?