You have to exercise your core muscles. That’s what any physical trainer worth his or her salt will tell you. The same goes for your “moral core.” And Michael Brune, head of the Sierra Club, assures us our president has a strong one.

What kind of morals Obama has, well that’s another matter, but he likes to exercise them everyday, whether it’s giving his kill list a good once over or playing golf with an oil and gas tycoon while climate protesters are ringing his doorbell. You know, the kind of not-so-hopie-changie stuff that would have made liberals livid if George W. Bush had pulled it. 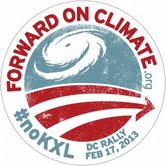 The logo for Sunday’s innocuously titled Forward on Climate rally looked a lot like the emblem of the president’s 2008 campaign, back when he promised that we’d remember his election as “the moment when the rise of the oceans began to slow and our planet began to heal.” Showing just how far we’ve come since then, the swooping road leading to a rising sun — tacked to so many American lawns in ’08 — was replaced on Sunday by a swirl representing a hurricane.

Billionaire Tom Steyer spoke for the 1 percent at the rally. “The Keystone XL pipeline is a bad investment,” he told the mostly broke and debt straddled young people on hand, even as the hedge fund he manages has oil, coal, nuclear and fracking holdings.

Previously, Steyer pontificated to the Washington Post: “I feel like the guy in the movie who goes into the diner and says, ‘There are zombies in the woods and they’re eating our children.” As often happens in horror movies, those who you think are your friends turn out to be brain eaters.

Organizers of Sunday’s rally might do better to encourage their bases to use their brains, but it appears they’ve chosen to dumb down their politics in the interest of casting as wide a net as possible.

And then there was Van Jones. “I have had the honor of serving this president,” said the former White House green jobs adviser whom Obama fired at the first wiff of a right wing smear campaign months into his first term. Jones continued, “What I want to tell the next generation is this: Don’t be a chumps!” The phrase caught on. Chants of “Don’t be chumps” rippled through the crowd.

While a petition in the run up to the February 17 demonstration from the Public Interest Research Group urged signatories to let the president know they “have his back when it comes to tackling global warming,” former Green Party presidential nominee Jill Stein asks, “Why should we have Obama’s back when he keeps stabbing us in ours?”

The crowd on Sunday was truly an awesome sight. This is in large part because tote bag environmental groups (you send them money, they send you a tote) like the Sierra Club and the PIRGs encouraged their membership to attended the Forward on Climate rally — more evidence that simply lobbying the White House has gotten them no where. An estimated 35,000 to 50,000 people turned up. Meanwhile a recent poll found an estimated 64 percent of Americans believe it’s time we take action on climate change. Rather than guarding the president’s back, why not use these numbers to push back instead?

Why animation is a powerful medium for cultural resistance

Inside the indigenous movement to protect India’s commons

Pushing back to move climate forward