Today, the year’s most anticipated film, The Hunger Games: Catching Fire hits theaters across the county. It’s the second movie based on young adult author Suzanne Collins’ freakin’ awesome trilogy about a teenage girl named Katniss who sparks open rebellion against the evil and oppressive government. (Yes, I read all three books, and no, I’m not embarrassed by that fact.)

The movie is set in a post-America dystopia called Panem that is divided into thirteen impoverished districts and a grotesquely opulent Capitol. Sure, there’s some fictionalization, but overall the movies’ landscape bears such uncanny resemblance to today’s reality that it’s as if Hollywood just handed us a billion-dollar propaganda video.

And now, people around the country are using culture jamming to turn this blockbuster into a battle cry.

In the latest “selfie” craze, people are taking pictures of themselves raising a three-fingered salute, which is the Hunger Games’ version of a raised fist.

So far, many of the salute-wielding, Katniss-inspired revolutionaries are fellow teenage girls (which is awesome, and another reason that we should see more action movies starring young women). Then again, here’s a photo of Richard Trumpka, president of the AFL-CIO, throwing up the symbol. 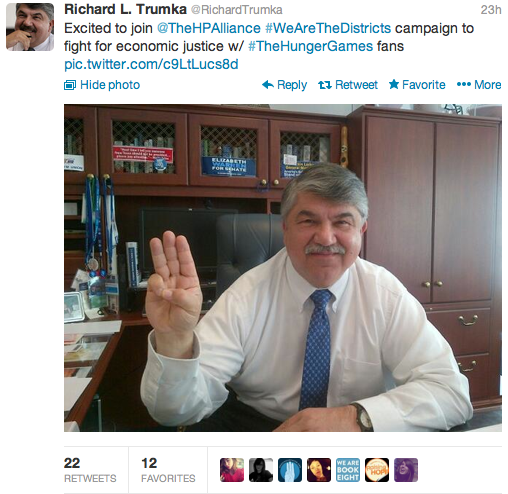 Yes, that’s right — the AFL-CIO president did take a “selfie.”

The We Are The Districts Tumblr and hashtag is flooding social media with statistics about how hunger — and other forms of structural violence — are very real off-screen.

Much of the culture jamming is being led by the Harry Potter Alliance, which also created this video connecting the dots between Katniss’ Panem and reality.

Of course, Hollywood is doing its best to hide the fact that the films are about economic inequality and social justice. In the movie’s official social media push, Hollywood has chosen — without a hint of irony — to play the part of the Capitol.

All the more reason to organize a “Hunger is Not A Game” food drive instead of shelling out $13.50 (at least here in New York City) to actually see the movie. Remember: As awesome as the revolution’s special effects probably are, what would be way cooler is making these actions come to life in the streets.

Laura Gottesdiener is a freelance journalist and former Democracy Now! producer currently based in northern Lebanon.