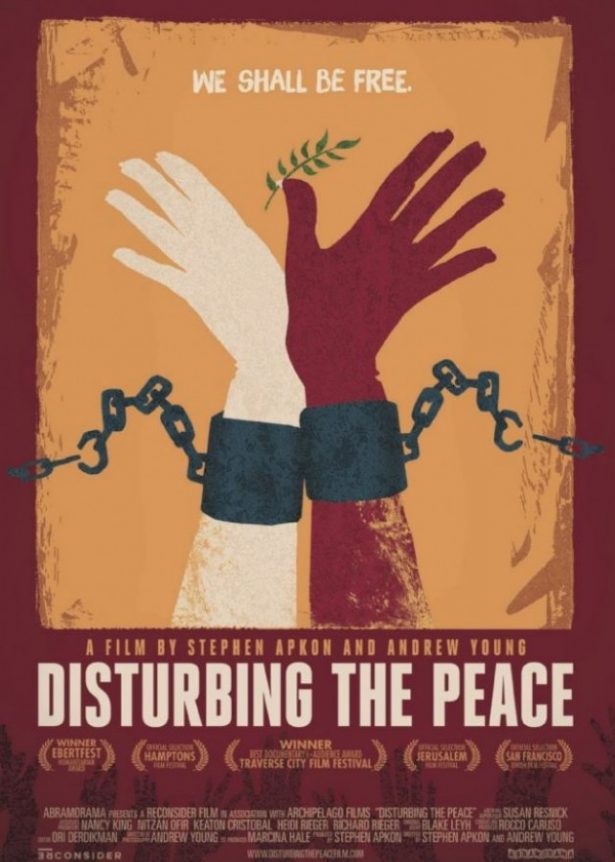 “We were born and live under Israeli occupation,” an Arabic-speaking voice opens the film “Disturbing the Peace,” his somber narration overlaying scrolling footage of the barrier wall that separates the West Bank from Israel. “We are ready to do anything to get our freedom — even this.”

“Disturbing the Peace” begins with familiar, bleak histories of the Holocaust, the 1948 Nakba, and the ensuing wars over the Holy Land. The film presents this history through the alternating narratives of Israeli Jews and Palestinians, framing the decades of violence through the dual lens of Zionist and Arab experiences. While the film touches on political events, the film focuses on the “on the ground” effects from the Yom Kippur war to the Intifada, glimpsing the personal losses suffered on each side.

Yet, while the audience is given insight into both Palestinian and Israeli worldviews, the film’s narrators are, at first, bewildered by each other. Absent a civilian dialogue, eruptions of violence are used to justify crackdowns from the Israeli forces and inspire attacks from the Palestinian resistance. “I really didn’t understand,” says one former Israeli soldier, describing the chaos he faced as an IDF soldier during the Intifada, “why do they hate us so much?”

“Disturbing the Peace” turns on this question. The film chronicles the awakening of both Israeli soldiers and Palestinian political prisoners to ideas of nonviolent resistance. Sulaiman Khatib, in prison after attacking an Israeli soldier, describes being shaken after viewing a film about the Holocaust. After this, Khatib began reading about leaders like Nelson Mandela and Gandhi, drawing inspiration from their legacies. Shifa al-Qudsi, a would-be suicide bomber, is also moved after an encounter with a jailer who lost her brother in an attack by a suicide attack. “I expected her to be angry with me for her pain,” recalls al-Qudsi, “But she said, ‘I am not angry with you. Blood brings blood.’” After this, says al-Qudsi, “I began to think a lot. I thought … maybe goodness is possible.”

On the Israeli side, too, the recognition of the “other” comes softly, but forcefully. Chen Alon describes detaining a Palestinian at a checkpoint, then finding himself moved at the sight of the sick children in the backseat. A father himself, Alon says, he began to realize that his enemies were not so different from him after all. “I was looking at these children and I felt that something is extremely wrong in the situation. I realized there was a split, of me as a father … and me as a soldier. I knew that I could not live with this split anymore.”

These revelations lead these characters to search for their own forms of nonviolent resistance. In the case of the Israelis, this began by conscientious objection to the mandatory IDF service, a decision that drew contempt from their families as well as the Israeli government and media. For their Palestinian counterparts, choosing nonviolence meant abandoning armed resistance and making the controversial decision to engage with Israeli partners. In both groups, a sense of mistrust loomed large.

Eventually, the activists come face-to-face in a tense meeting in the West Bank. Recognizing their shared commitment to oppose the occupation, in 2006 the group founded a collaborative they called “Combatants for Peace.” The group draws on nonviolent tactics from abroad, such as Theater of the Oppressed, wherein Israelis and Palestinians “rehearse the transformation of the reality … which wants to keep us separate,” explains Alon. The participants also create works of art in paper mache, which they carry with them during dramatic actions at the Israeli barrier wall. The film glimpses large, bilingual gatherings of Israelis and Palestinians, during which members participate in dialogues and sit side-by-side listening to presentations on nonviolent resistance. At times, blocked by checkpoints and walls, members use Skype to “meet” and organize.

The film touches on the question of “normalization,” the objection that cooperation between “oppressed” and “oppressors” may obscure the inherent power imbalance between the two groups. While leaders like Omar Barghouti of the BDS movement has disavowed such efforts, the participants of Combatants for Peace believe they are able to work together while remaining conscious of the disproportionate power of the Israeli regime. “We don’t need to pretend that Israelis and Palestinians are in equal circumstances,” Khatib tells a group of participants, “but I hope together we can be stronger than the reality we are living in.”

The message of the Combatants for Peace is strongly in favor of a political solution for the conflict, even as many of the members remain outspoken about their nationalism. Officially, the group endorses a two-state solution, while highlighting the need to end the occupation. The group is tested through assaults on Gaza and failed negotiations between their respective leaders, but holds firm to their nonviolent message. “There is no military solution,” argues Khatib, in Hebrew, to an Israeli audience. “War is not our fate.” Later, in Arabic, Jamel Qassas reiterates: “There is no answer but peace, there is no path but peace.”

“Disturbing the Peace” will premier in New York City on November 11 at the Lincoln Plaza. Members of Combatants for Peace will also join partners from the Veterans for Peace, Code Pink, and other organizations on the same day as part of the Peace Contingent in the city’s Veterans Day Parade. Members of these groups have issued an open call to people in the area to join them in the march at 1:30. (The expected meeting point is East 27th St between Madison and Park, but participants should check the Facebook page for location updates.)

Sarah Aziza is an Arab-American writer, graduate student and activist based in NYC. She has previously worked among refugee populations in North Africa, Jordan and the West Bank. Her areas of focus include immigration, human rights, international politics, feminism and mental health. She is a lover of the story-less-told. Find her on Twitter @SarahAziza1 or www.sarahaziza.com

5 protests blooming in Washington this spring

While Britain’s Parliament is suspended, its arms fair is open for business