In the New York Times this week, there’s a haunting story by Katharine Q. Seelye on a church service in Kentucky in which the pastor invited parishioners to bring their guns. Here’s the man of God himself with his submachine gun: 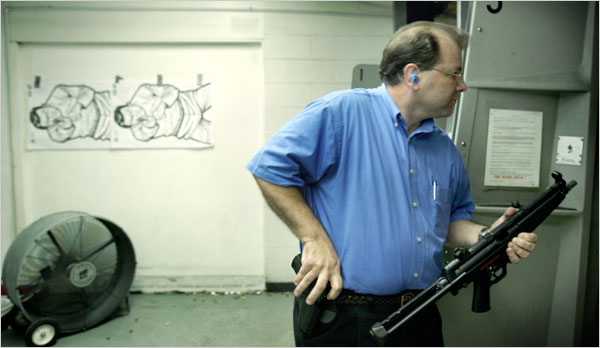 In addition to the church service, Seelye discusses the rising rates of gun-buying in this country, as well as NRA-stoked fears that Obama—who has mainly ignored gun issues so far—will take away their weaponry.

Even better than the article, though, are two posts on the Times‘s Lede blog, which have more details from the church service and other insights from Seelye’s reporting. There’s even a discussion forming in the comments about whether a church service about guns is “heresy” and the meaning of Jesus’s mysterious remarks about swords. In America, gun control isn’t just a public policy question; it’s a theological one too. And even in Kentucky, one of the country’s most gun-friendly states, not everyone is happy to see religion conflated with gun-toting.

They’re not mentioned in the original article, but at the bottom the first of Seelye’s Lede blog posts, she discusses other Kentuckyans who are bent on doing things differently.

Clergy from some other churches and peace activists are sponsoring an alternative event, called “Bring your peaceful heart, leave your gun at home,” and today I visited with the organizers.

The executive director of the Interfaith Paths to Peace, Terry Taylor, one of the organizers, told me that he and 18 co-sponsors planned this event because they were “deeply troubled by the idea of wearing weapons into sacred space.”

He said they did not consider themselves “protesters,” per se, and did not want to be part of a demonstration at New Bethel.

They appear quite insistent on avoiding the posture of protest, and have a graceful way of explaining why:

“A protest is not the way we do things,” Mr. Taylor said. “We’re not against things, we’re for things. Going and carrying signs at that event would build unhappiness and could potentially be confrontational. They have the right to do what they want. We’re going to give people an alternative that we think is better.”

Those of us so eager to protest violence could probably stand to keep this approach in mind more too. After all, there is violence even in pulling somebody’s gun from their holster. Much better is to offer them something else that they’ll want to carry around even more, that will make them feel even safer.

Bring your guns to church day