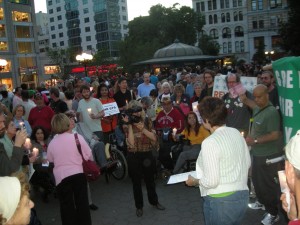 As part of a nationwide week of action, on Saturday evening around 50 people gathered for a candlelight vigil at Union Square in New York City to call for a national, single-payer health care plan.

As the event started, the organizers passed out signs and encouraged the largely older crowd to form a circle. Several speakers from the Private Health Insurance Must Go! Coalition then spoke of the dire state of our current for-profit health care system, and of the many benefits of the National Health Insurance Act (H.R. 676) – a bill that would guarantee everyone health care through the government as a basic human right.

Inspired by the thirteen doctors, nurses and single-payer advocates that were arrested during Democratic Senator Max Baucus’ Senate Finance Committee hearings on health care reform last month, one speaker declared that a much larger wave of civil disobedience would be necessary for the movement to gain traction.

After the planned speakers finished, the floor was opened to anyone who wanted to share their story. A camera crew filmed as several people, including a few in wheelchairs, took the opportunity to talk about their struggles with the system.

Unfortunately, the vigil was somewhat poorly planned. The speakers were next to impossible to hear, because the organizers forgot to bring a microphone. The fact that Union Square was alive with music, breakdancers and the usual street vendors on what turned out to be beautiful Saturday evening didn’t help either.

I also found the circle to be uninviting to passers-by, who may have otherwise been interested in joining the vigil. And since we were all facing the center of the circle, it made the signs that we carried difficult for anyone who was not part of the group to see.

Still, why more people were not there baffles me. I thought – or at least hoped – that hundreds or thousands would have shown up. For better or worse, health care seems to be an issue that directly touches more people than the wars in Iraq and Afghanistan. Some 47 million Americans have no insurance at all and tens of millions more are underinsured. Moreover, polls show that the majority of Americans, and the majority of doctors, want a national health care plan.

So where were these millions on Saturday? Why did the hundreds of young people who were just hanging out at Union Square not join the vigil? I’m sure the vast majority were not immune to the issue. Is it our fault for not doing a better job of getting the word out or making a compelling case for action, or is it simply the result of apathy?

Undoubtedly, one major problem is that most people never learn in school or through the corporate media that many of their rights and freedoms were only won by massive, nonviolent movements that would not accept the status quo.

Despite these frustrations, I was nevertheless glad to have been there. I almost always feel more hopeful about our world, and our ability to change it, when I am around people who are willing to take a stand for their beliefs and speak out.

Inside the battle for trans care in New York

Moral Mondays blossoms in North Carolina and beyond