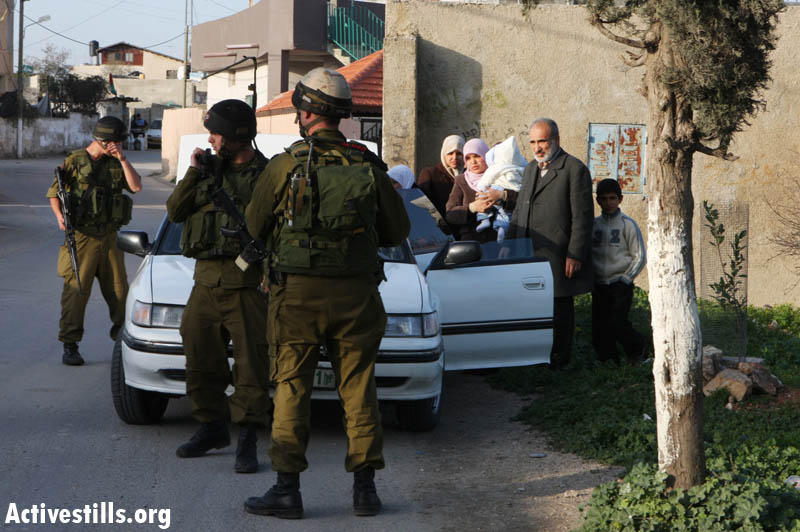 As I read through my emails yesterday morning, I came across one that had been sent by the Popular Committee of Bi’lin (West Bank). It’s subject line read: “Bi’lin Invaded by Israeli Soldiers.” The email, sent by Iyad Burnat, the head of the Popular Committee, describes a 2:30 am raid by close to 70 soldiers. Declaring Bi’lin a “closed military zone,” the soldiers broke into a number of homes. In the process, they seized and took away – for no stated reason — two sixteen-year-old boys, Mohsen Kateb and Hamoda Yaseen.

Burnat’s home was also broken into and his nine-year-old-son, Abdal, threatened with seizure. At that point, a number of Popular Committee members as well as those of the International Solidarity Movement stood repeatedly in the path of the soldiers. Though they were brusquely pushed aside, they did manage to prevent Abdal from being arrested. They also managed to prevent the arrest of Haitham al-Katib, an activist, who was video-taping the raid. Burant reports that similar types of raids haven taken place almost every night for the past two weeks and that, all told, seven Bi’lin community members have been arrested.

Throughout the morning, I have read and re-read this email. Perhaps it’s because I was just in Bi’lin two weeks ago and met Burant along with many other Popular Committee Members. Perhaps the memory of being bombarded by tear gas cannisters and rubber bullets during the Committee’s Friday afternoon protest march to the separation fence (the building of which has claimed 60% of the community’s farmland) has yet to dissipate. Or, perhaps it’s simply because human beings are suffering terribly and there seems to be no end to that suffering in the near future.

Burnat’s email closes with a note of gratitude, “Thank you for your continued support.” Perhaps this is the line, most of all, that keeps me returning to my computer. How can I continue to support those whom I have known for two years in this community? What does solidarity with the Popular Committee’s nonviolent movement look like from here in the US, thousands of miles away from Bi’lin? If I am not there to put my body in the way, as did the folks of the Popular Committee and the International Solidarity Movement, what else can I be doing?

Jeff Halper, the director of the Israeli Committee Against Home Demolition, an organization with whom I worked last summer in the West Bank, tells a wonderful story of his August 2008 meeting with residents of Gaza. Halper, who had been on the first of the Free Gaza boats, related that his Palestinian hosts wanted to speak with him in Hebrew, a language they missed speaking since they were no longer able to work or travel within Israel. During his conversation, now in Hebrew, one elderly man said to Halper, “Tell me, how can we get out of this mess together?” When Halper, upon his return to Israel, told this to the Israeli media, they would simply not report it. He speculated that there was too much of an investment in the narrative of “the Palestinians are violent people and they hate us [the Israelis]” for the counter-narrative witnessed by Halper to seem credible.

Like Halper, I appreciate the wisdom of the elderly Palestinian gentleman: how can we do this work together? His insight speaks to what’s foundational in the practice of nonviolence: do not get caught in the essentially meaningless duality of “friend” and “enemy.” Or, as Dr. Martin Luther King said in his “Christmas Sermon on Peace”:

It seems to me that one of the most important practices of nonviolence is that of “not getting caught.” The use of violence, for example, tends to blindside its perpetrator. The “enemy” is reduced to a caricature and becomes an object to be pulverized or annihilated. Nonviolence, at its best, tends to be more skillful in its applications. It is, as Dr. King put it in his book, The Strength to Love, “a powerful demand for reason and justice.” One responds, for example, to the immediate facts at hand, not to a narrative that constructs “other” as the devil incarnate. But because nonviolence demands so much of us, it is often easier – and understandable – that there is a constant retreat into the use of violent force. When one’s home has been demolished, one’s employment cut-off and one’s sixteen-year-old son killed for no reason, why respond with nonviolence? When an unaccountable oppressor and its enablers rationalize the “despair” of a people, such as we see in Gaza, how are we to “live together?”

The Popular Committee of Bi’lin, with its 227 consecutive nonviolent Friday marches, demonstrate one nonviolent way of “living together.” Another way, and perhaps more for Americans, is to be accountable. When asked, “What can we do to help those who suffer the violence of the Israeli Occupation?,” so often our Palestinian hosts told us to two things: take care of your own [US] house and answer the question of “what to do” yourselves.

Certainly, in Dr. King, for example, we had someone who spoke to “taking care of one’s own house.” In his “Time to Break the Silence,” sermon, he called for truthful self-reflection during the time of the Vietnam war: how can a nation that kills millions of people, maims horribly their children, drops chemicals on its own soldiers, poisons land and water, bombs hospitals and shelters, etc., be considered a force for liberation? King’s naming of America as “strange liberators” has not been proven any less accurate in the passing of time. The “war question,” is just as paramount today as it was during King’s time, particularly for those who suffer our bombs, our bullets, our white phosphorus gas, etc.

Self-knowledge, in the manner described by King, points to the path we need to take in order to “clean up our own house” as well. Once again, we had someone who also pointed this out: Dorothy Day, the co-founder of the Catholic Worker movement and a pacifist. In Daniel Berrigan’s essay, “The Long Loneliness of Dorothy Day,” he describes how Day said what others would not dare to say, or had not the insight to see:

Why, in a sane world, she asked, should a wounded human lie in a ditch? She began, so to speak, literally to remember that body. The crime, the neglect, were universal, she cried. All over the world, on an “average” day, the unemployed and unemployable, the victimized and the vacuous, the homeless and the feckless, the alcoholics and the druggies, the flaky and the furious – in great numbers these were struck down, and fell into ditches.

And the world went its amnesiac blank-eyed way, the way named “money and routine and ego and academe and religion.” The way named, on the largest signpost of all, lettered in blood – war.

With regard to the question of “what to do?”, I suppose each must make the effort to anwer that question for him or herself. I’ll mention, however, Berrigan’s essay, “We Are Filled With Hope,” as a resource for working through this question. In this essay, Berrigan gives an account of the “Plowshares Eight,” a communal effort of eight nonviolent activists to disarm the nosecone of a Mark 12A nuclear war head. On September 9th, 1980 these eight—including Berrigan—entered General Electric’s Nuclear Re-entry Division Plant in King of Prussia, Pennsylvania and hammered upon the weapons. The activists grounded their action in the words of the prophet Isaiah (2:4), who, envisioning a nonviolent future, said: “they shall beat their swords into plowshares, and their spears into pruning hooks; nation shall not lift sword against nation, neither shall they learn war anymore.”

When Berrigan speaks of “what to do?” with the scourge of nuclear weapons, he says: “All great moments are finally simple. Why not, we asked our souls, why not us, our hands, our hammers? And if not us, who?” Further, he reflects:

The weapons are a kind of demonic anti-sacrament, a sign of a mystery, of the sin that gives up on life. Despair of sisters and brothers, of human variety and beauty, of contesting forms of organizing societies. Most grievously of all, despair of the possibility of peacefully settling human differences.

The logic of hope, we thought, runs counter. What has been ill made, immorally made, illegitimately made, secretly made—made without accountability or public debate or plain horse sense—this can be unmade.

The elderly Gazan gentlemen, the folks of the Popular Committee and the International Solidarity Movement, the Israeli “Refusniks,” have all “unmade” the logic of violence and its tools. Dr. Martin Luther King, Dorothy Day and Daniel Berrigan have shown that we, too, are capable of doing the same in America. Let there be no more “cries in the night;” let us live the “fierce urgency” of nonviolence right now.

Cry in the night: What else can we do for the suffering?