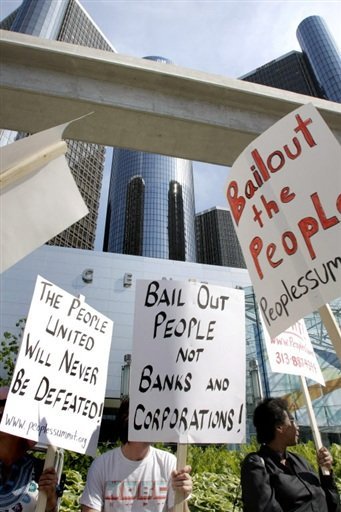 In Detroit, hardly a soul has been left unscathed by the economic downturn. Hardly a soul, that is, except for dozens of business leaders who have gathered in the city this week for the National Summit – an economic forum designed to “define America’s future in a global economy.”

The Summit’s website states that it is “a call to those who want to have a voice in shaping tomorrow,” but then lists exactly who they have in mind: “top corporate leaders from multiple industries, top federal, state and local government officials, mid- to senior-level executives… academic leaders, entrepreneurs, and young talent.” With tickets being sold for over $1,400 each, it is unlikely that the many unemployed voices of Detroit will be a part of the conversation.

In response, hundreds of local groups and community members have organized the People’s Summit – four days of nonviolent resistance, including demonstrations, creative art and performance, collaborated strikes, and sit-ins. During this alternative summit, protesters also plan to implement a moratorium on foreclosure evictions by “going into neighborhoods and supporting homeowners who are willing to confront the bailiffs.”

The event kicked off on Sunday with the construction of a “tent city” in the heart of downtown Detroit.

On Monday evening, roughly 200 people marched to the Renaissance Center to confront the National Summit CEOs and bankers. Shouting slogans such as “Bail out the people. Not the banks,” demonstrators from as far as Atlanta and Boston challenged the business leaders to “stop meeting in secret” and allow access to the Renaissance Center (home of GM). The objective was to point out that the corporations and banks responsible for the worst crisis since the Great Depression cannot provide a solution to the problems facing Detroit, such as home foreclosures, plant closings, school closings and environmental degradation.

Today, unemployed autoworkers led a second march to the Renaissance Center where the CEO of American Axle, Richard Dauch, was scheduled to address the business summit regarding the future of manufacturing. As David Gilbert, an unemployed resident of Detroit told the AFP, “They don’t care about homelessness. They only care about profits, and people are expendable.”

The contrast between the National Summit and the People’s Summit could not be starker. As members of the People’s Summit protest unemployment and foreclosure outside the Renaissance Center, their former employers convene inside to “determine the future of U.S. business.”  Though the National Summit is being sold as a way to recover America’s economic strength, there has been little media recognition of the role business leaders played in the current economic situation.

In a town that is all too familiar with recession and corruption, the people have learned to take matters into their own hands. Derek Grigsby, an employee of the city water department for 23 years, lost his job this past week. “These CEOs have the audacity to say they are going to plan out our future,” he said. “We can plan out our own future.”

Anna Springer lives in an urban farming community on the Southwest side of Detroit. She recently moved from Chicago, where she worked for the American Friends Service Committee and was a member of Kairos Chicago. She can be reached at: annarspringer[at]gmail.com.

The People’s Summit: Four days of nonviolent resistance in Detroit