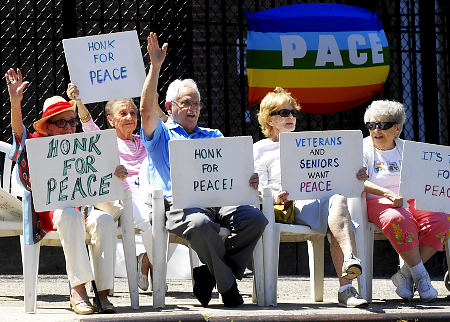 The conservative New York Daily News had a surprisingly delightful story yesterday about a group of protesters that has been on a busy street corner in the Bronx, registering their dissent against the war in Iraq, every Monday (as long as the weather permits) for the last four years.

With weekly antiwar protests taking place in cities big and small around the country, what made this gathering newsworthy? According to the reporter, the average age of the 19 protesters, who came from the nearby Kittay House for senior citizens, was 87.

Here are a few choice quotes:

They are holding signs reading “Seniors for Peace,” “Senior Patriots Against the War,” “More Funding for the Wounded” and the message that has caused the at-times deafening eruption – “HONK FOR PEACE.”

But the low, raspy voice of 97-year-old Martin Harth, barely audible through the din, utters the ultimate proclamation.

Ida Kotowitz, 90, in a beige pantsuit and wearing big, dark glasses, sits in the shade. “I can’t sit in the sun,” she says. “When it’s cold, we don’t come out until the afternoon.” She says she feels good about protesting the war. “I try to do my part,” she says. “We had no business starting it.”

Sarah Schnurr, “93 this week,” one of the charter protesters, holds a sign reading “Make Love Not War,” and raises two fingers in the peace sign.

Sometimes younger activists – myself included – get down at how few people from our generation come out to protests. And rightfully so. It’s often pretty pathetic given the depth of the crises we face. (The one major exception I’ve found is the annual protest at the School of the Americas, which is dominated by students from Jesuit high schools and universities.)

If we’re not careful, however, this frustration can lead us to discount the value of those from other generations. Yes, we desperately need to find ways to attract more young people to activism and nonviolent action, but we also must always be appreciative of those who have shown us the way and continue to do so even in their older years. May we all never retire our consciences or cease fighting for justice!