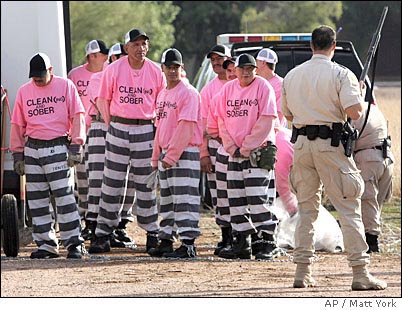 Sheriff Joe Arpaio, the self-proclaimed “toughest sheriff in America,” has made a name for himself by being tougher on prisoners than on crime. Since 1993, he has overseen law enforcement and county jails in Maricopa County, Arizona, an area of nearly four million people that includes Phoenix. William Finnegan profiles (subscription only) the 77-year-old sheriff in The New Yorker’s July 20 issue.

Arpaio seems to delight in dehumanizing others. After winning his first election in 1993, he built a tent-city jail in an area where temperatures can rise to 135 degrees. He banned cigarettes, hot lunches, coffee, and salt and pepper, rejecting a study he had commissioned when it found harsh jail conditions ineffective at reducing recidivism. He gave inmates just two meals a day, each at 30 cents a head. He instituted black-and-white striped uniforms, but added pink underwear and pink socks. Several times he humiliated prisoners by marching them between facilities in the pink underwear alone. The prisoners nicknamed him “Hitler.”

Deaths and injuries in Arpaio’s jails have already cost Maricopa County taxpayers $43 million in court and settlement expenses. Arpaio’s officers have used stun guns against prisoners who were already immobilized in restraint chairs. As Finnegan writes, “The Phoenix New Times found that, between 2004 and 2008, the county jails of New York, Chicago, Los Angles, and Houston, which together house more than six times as many inmates as Maricopa, were sued a total of forty-three times. During the same period, Arpaio’s department was sued over jail conditions almost twenty-two hundred times in federal district court.”

Inmates in Maricopa County’s jails have shaken off the threat of retaliation and engaged in civil disobedience. In one of the largest US prison hunger strikes this past Cinco de Mayo, 500 inmates refused the morning meal and 900 refused the evening meal. Activists outside the jails have organized candlelight vigils, written letters, demonstrated at county meetings, and picketed Arpaio’s offices. On February 28, the National Day Laborers Organizing Network and El Puente Arizona organized a “March to Stop the Hate” focusing on Arpaio’s treatment of undocumented immigrants. Some 3,000 people rallied in downtown Phoenix.

Zack de la Rocha, of Rage Against the Machine, spoke at that march:

In the latest Arpaio investigation, the US Department of Justice is reviewing his discriminatory profiling in the arrest and treatment of possibly undocumented people. Perhaps we might one day thwart this mockery of a ‘public safety’ official, who takes pride in the detestable quality of his jail food and in situating his open-air tent-city jail beside a dump, who diverts limited county dollars away from investigating violent crime or even responding promptly to emergency calls, to instead raid workplaces in search of undocumented yet taxpaying immigrants.

Who the real “criminal” is, one hardly has to wonder.

Labor fights back against end to ‘temporary protected status’ for 59,000 Haitians

Lessons from what Cesar Chavez did right — and wrong

Hot and Crusty film featured in the New York Times

The cruelest sheriff in America