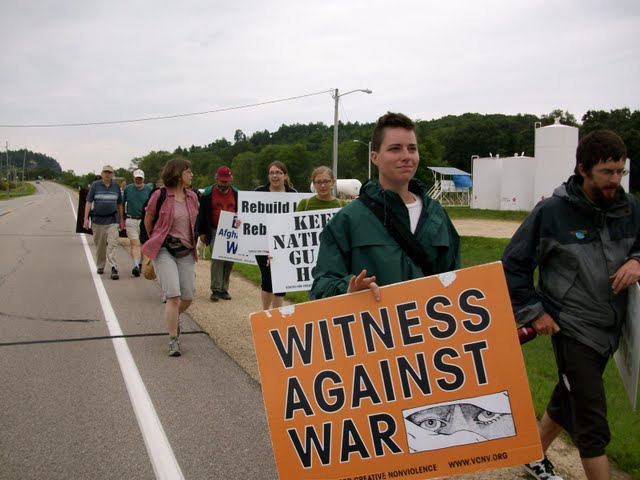 On August 6, the day started off with a vigil outside of Camp Williams Volk Field. An estimated 30 anti-war activists were organized, holding placards calling for, in-short, the ouster our military-industrial complex and the rebuilding of what the U.S. has destroyed. The fenced-in U.S. Army base loomed in the distance while police watched us with cameras in hand. This would set the tone for the next three-day Walk for Peace through Tomah, Camp Douglas and Tunnel City, Wisconsin before ending at Fort McCoy’s main gate.

Hailing from Illinois, Iowa, Wisconsin, Minnesota and New York, the protesters ranged from war veterans to activists affiliated with Voices for Creative Nonviolence (VCNV) and Christian Peacemaker Teams (CPT). By the third day, 50 civil resisters turned out at Ft. McCoy to remind others of the lack of concern the government has shown for the U.S. troops. With 21,000 additional U.S. troops being redeployed to Afghanistan – along with 130,000 still remaining illegally in Iraq – the proof of the military empire’s unwillingness to desist shows with each passing day. There’s also the skewing of Afghani and Iraqi civilian death tolls along with the widening death rate of American troops.

With each step closer to our destination, we faced more opposition. People driving by yelled out, “We’re fighting for a reason!” But none of them told us what those reasons were. Why are American soldiers risking their lives for us? The Public Affairs Officer, Linda Fournier, at the base told reporters “the soldiers that are here training at Ft. McCoy and come through here, they are fighting for the rights of the people to protest.” But were we not already free before we invaded Iraq and Afghanistan? So is it for freedom? Safety? Women’s Rights? Democracy? Or is it because if U.S. soldiers were to refuse to follow unjust orders they’d risk being lambasted by their fellow officers and face punishment?

While at a hotel, a woman came up to one of us and said, “My son’s being redeployed into Kandahar, Afghanistan.” When asked if she and her son believed in what he’s doing, she replied: “Initially, we believed in the governments cause, but now we’re not sure what’s going on. He’d rather be home.”

The nine activists who trespassed and were arrested at Ft. McCoy demonstrated how we all felt. The message was clear: We’re no longer afraid. We’re tired of the wars, the lies, the threats against peace. We’re not going to go passively into quietness. You’re going to have to physically deal with us. There will be no white flags in our hands, but just a peace banner lifted above our heads in solidarity.