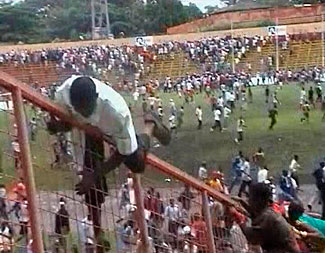 In the West African country of Guinea at least 157 people were killed and 1,200 wounded at a protest yesterday, according to the Guinean Organization for Defense of Human Rights. Security forces reeking of alcohol opened fire on 50,000 people who had gathered at the capital’s main soccer stadium for a rally against junta leader Captain Moussa “Dadis” Camara, who took power in a military coup last December. According to the AFP:

Protestors carried placards reading “No to Dadis” and “Down with the army in power.”

The junta banned the demonstration, but several political parties, trade unions and civic organisations vowed that the event would go ahead.

In the middle of the morning, riot police charged the protestors.

People then scattered in panic as the presidential guard shot into the massive crowd with live ammunition. The AP reports that:

Not surprisingly, Camara claims that the military was acting out of his control, but the people aren’t buying it. “The killing of all these innocent protesters can only mean doom for his political ambition,” said one local, referring to Camara’s plan to run in elections set for January.

Unfortunately, the demonstrators were not able to maintain their nonviolent discipline, which inevitably made it easier for the regime and the security forces to justify the violent crack down. Again from the AFP:

Witnesses said that opposition leaders who tried to reach the stadium were halted by police close to Conakry’s university, where clashes erupted by the end of the morning between riot police and several thousand demonstrators.

Police reinforcements were rushed to the area, where the protestors were armed with stones and the police with tear gas.

In Conakry’s working-class Belle-vue district, demonstrators set a police station and a police car ablaze, according to residents.