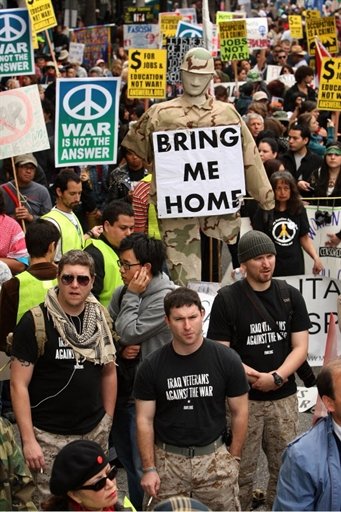 A recent AFP article looks for answers to this question by talking with activists from the Vietnam War-era and students involved in opposing the current wars in Iraq and Afghanistan.

There are of course many reasons for the decline of activism at universities, which have historically been a hotbed for anti-war activity.

Mounting economic and academic pressures on today’s youth, intimidation by authorities, online distractions and conflicted views about the “good” war in Afghanistan, not to mention other causes such as health care and slashed school budgets clawing for attention, have conspired to snuff out anti-war activism on campus, experts and students say.

Tom Hayden, one of the founders of Students for a Democratic Society (SDS) in the 1960s, pinned it squarely on the privatization of conflict.

“Students were the bulwark of the anti-Vietnam war movement because students were being drafted, full stop,” Hayden said. “Ending forced conscription radically diminished the possibilities of future student anti-war protests.”

The article also points out that young people today are “marching with their fingers instead of their feet.”

Some, including myself, question how much pressure this type of activism really puts on those in power to change course.

Stanley Aronowitz, a Vietnam anti-war organizer, insists online petitions do nothing but entrench users in the “anti-reality” of Internet activism.

“I don’t believe petitions do anything,” he said. “They are what middle-class people and intellectuals do to convince themselves they’re getting somewhere.”

“But they also privatize people’s lives to much more of a degree than when people had to go to meetings and act collectively.”

A student who runs the Student Peace Action Network also suggests that the use of new “non-lethal” weapons, like the taser, keeps some from taking to the streets or speaking out.

If that is the case, however, I think it simply reveals the lack of conviction of young people today, because activists in the 60s often risked their personal safety to challenge to the war in Vietnam.

Why desperation could be the key to tackling climate change

What happened to anti-war activism at college campuses?